In a Rollercoaster edition of the 24 Hours of Le Mans which saw several key challengers failing to finish. Porsche eventually claimed victory with the #2 Entrant of Timo Bernhard, Earl Bamber and Brendon Hartley.  The #2 car re-emerging from issues earlier in the race to claim a victory over the LMP2 Oreca 07 of Jackie Chan DC Racing.

Meanwhile during the race Two of the Toyota contenders failed to finish and one finished 9 laps off the lead. A disastrous day for Toyota. Porsche had its own issues, the aforementioned Porsche #2 saw redemption later in the race whilst Porsche #1 which was the last of the hybrid prototypes to run relatively fault free fell by the wayside late in the race.

The attrition in the P1 hybrid ranks perhaps indicated the performance envelope had been pushed too far in hybrid performance, although other factors such as the heat during this race will have also factored. Ultimately though, the fact Porsche did eventually win at Le Mans today probably is the best outcome the LMP1 factories collectively could of hoped for from a rather disappointing day.

The LMP2 battle was much better in terms of reliability than expected with Oreca dominating the class, with Rebellion Racing showing strongly earlier before issues led to the DC Jackie Chan Racing team taking the helm of the class, and ending up on the overall podium, if a little short of an overall victory.

The GTE PRO battle between Aston Martin and Corvette Racing was incredible. The BOP in the class this year was much better with all of the manufacturers at one point during the race looking in a strong position. 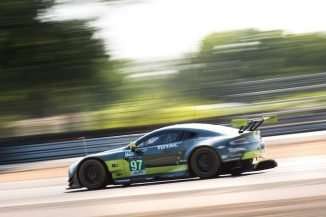 Not all of them finished strongly of course but I loved the showdown at the end between Aston Martin and Corvette Racing, reminiscent of the GT1 days and a wonderful send off if this year is in fact the last year for the V12 Vantage Platform in GTE Racing.

In GTE Am, it was JMW motorsport’s Ferrari 488 which claimed victory.

I’ll explore deeper into the race later and post some thoughts here. I hope you enjoyed this years 24 Hours of Le Mans as much as I did. Yes it was different, yes it was a much more traditional Le Mans in the sense that it was a race of survival rather than constant all out wheel to wheel racing but it was certainly an interesting race to view this weekend. Not the one I was expecting but at no point could I switch off from it or describe it as ‘dull’ to follow.

Even in a depleted LMP1 field, Toyota still can’t win. Time to throw in the towel and move on.

With just 2 manufacturers and no independent teams, LMP1 is circling the drain. And Toyota has been trying to win LeMans since they left F1(at a point where things looked promising), dumping equal amounts of money into that black hole of futility.

Toyota have said they’d return today for next year. I had similar thoughts though, a commitment is one thing, actually honouring that commitment quite the other. Lets not forget how suddenly Toyota dropped F1. They’ve got a growing WRC programme which is starting to reap rewards, and Toyota really threw everything at Le Mans this year with adding the third car and all. They seem kinda cursed at Le Mans, this is the fifth time in their history its come up short after looking promising, lets not forget 1998 and 1999, as well as the recent programme. There’s going to… Read more »

Well I too hope that they will continue, and as I said (before they confirmed right now) they have committed to 2019. it is not what I said/say, it is what they said.

Yes I’m perfectly aware of what Porsche and Toyota have committed too, thank you. I’m also aware of how many sponsorship ‘commitments’ or manufacturer ‘commitments’ to this sport have not lasted through their specified term and am therefore hopeful but cynical regarding Toyota.

The only reason I wrote ‘as salvu says’ is because you had already mentioned it above. I wasn’t citing you as the source of the information.

Kudos to Porsche who went from last to first. for a race that looked finished at the halfway point this was a dramatic 24h of Le Mans.

I do not think that Le Mans can turn back on hybrids technology as otherwise it ends up like Daytona prototype, fun racing, but pushrods in 2017. With most of the consumer cars moving in that direction the sports (F1/Le Mans) cannot turn back on hybrid technology. They must stay with hybrid, they could get rid of prototypes and allow hypercars, like McLaren P1, La FERRARI, Porsche 918 and others run by factory or privateer teams, or they can mandate a standard chassis or 2 and allow F1 PU’S, similar to what they have done for LMP2, or they can… Read more »

Sorry today has been busy and I’ve just got a chance to respond. So I don’t think we should get rid of Hybrids altogether for the reason you explained and my personal belief that Sportscar racing is the correct area for them. What I wouldn’t mind seeing though is A) Pushing the envelope back slightly on the hybrid development to the point that reliability comes before experimental technology showcase. Making something reliable allows it to be greater appreciated, take little steps then, rather than the giant arms race we seem to have in LMP1 right now. Not saying stop developing,… Read more »

Why should the rule makers impose rules to help teams/manufacturer/makers/entrants with reliability?. in my book reliability is the responsibility of the maker/manufacturer/team/entrant.
Should FIA have changed the rules when Renault were having reliability problems in F1, or Honda right up to this time?

Was more a thought on how to slow down the arms development race between manufacturers. Probably not a particularly well thought out one.

When the track record is broken by several seconds, then most the cars fail in the race. Albeit in an extremely hot race, it seems to me, that they need to limit somehow what the manufacturers can do, but without ending the more open regs LMP1 has and without taking ERS systems out the equation all together.

That’s a tough balancing act for any series, but LMP1 can’t go on as it currently does.

Gratuitous comment time: Regarding Fox US Le Mans coverage, I am sure Brian Till is not an idiot, but he does play one on TV. He does so effectively and enthusiastically.