Over the course of all the GrandPrix Weekends in the 2016 season the drivers covered considerably more than the 310km per race, with all the free practice and qualifying laps.  The total for each car (including the distance driven by any Friday FP1 drivers) is shown in the table below:

Note that for Max Verstappen and Daniil Kvyat (who swapped seats after the Russian Grand Prix), the distance is that for the car they ended up driving, not the distance they themselves drove.  This is because the Power Unit allocation (a maximum of five of each of the six Power Unit elements: Internal Combustion Engine (ICE); Turbocharger (TC); Motor Generator Unit – Heat (MGU-H); Motor Generator Unit – Kinetic (MGU-K); Energy Store (ES); Control Electronics (CE)) is linked to the car and not the driver.  As well as being champion Nico Rosberg covered the furthest distance over the course of the season, while Romain Grosjean managed a shorter distance than even Jenson Button to bring up the tail of the field.  While in Button’s case this may have been dominated by poor Honda reliability (his team mate Alonso didn’t complete that many more laps), in Grosjean’s case it may have been more car issues that caused the failures.  What is clear is how Mercedes dominate the top of the distance covered (even Lewis Hamilton completed significantly more laps than other drivers despite his well-publicised issues with the power unit).  Also the greater distance covered by the Red Bull pair compared to the works Renault team, perhaps indicating more car issues for the works team?  Ferrari also appear to have constrained their running to try and meet the required reliability with the works team covering less distance than seven Mercedes powered cars and both Red Bulls.  Even Carlos Sainz using a year old Ferrari power unit went further than the works team (and without incurring any penalties).  McLaren look to have significantly constrained their mileage in order to limit the number of grid penalties received although Button still needed one more PU than allowed by the regulations, Alonso took between seven and nine of each element to get through the season.  Also apparent is the reduced distance covered by the smaller less well funded teams (Sauber, Renault and Manor) compared to other using the same power unit.

This graph shows the spread of life for each Power Unit element.  It is calculated by dividing the distance each driver has driven by number of elements each has used.  So for each driver it gives an average component life.  The low figure for each of the elements shown here are the results from Lewis Hamilton.  This may be artificially low as he took an excessive number of new power units at Spa to ensure that he had more than enough to last the rest of the season without further penalty.  Hamilton was the only Mercedes driver to suffer a grid penalty for exceeding the allocationof Power Units.  The high results all come from Valtteri Bottas, who despite covering less distance than Nico Rosberg, used one less power unit during the season (in common with most of the Mercedes customers).  Only Pascal Wehrlein used a fifth element of all the Mercedes customers, fitting a TC and MGU-H at the final race.  As a Result Nico Rosberg’s component life are slightly below the Mercedes average for all except the TC and MGU-H. 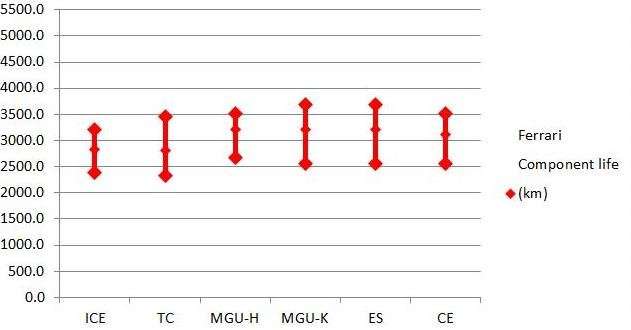 Despite also supplying four teams (even if Toro Rosso had year old power units), Ferrari were much more consistent than Mercedes in terms of component life.  Only Sebastian Vettel (ICE, TC and MGU-H) and Marcus Ericsson (TC) exceeded the allocation of five power units.  However as stated above, it did look like the teams’ mileage was restricted when compared to the rest of the field to ensure the required reliability.  More work is required over the winter to ensure sufficient reliability next year. 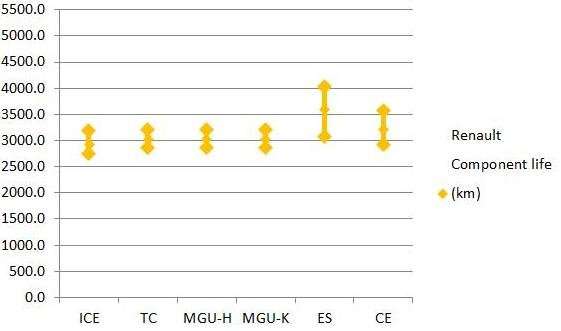 None of the four Renault powered drivers exceeded their power unit allocation, and as can be seen from the graphs, their elements lasted a little longer than Ferrari averaging around 3000km per component.  With only four complete power units available next season, and drivers averaging between 700 and 800km per event, each component could be required to run for over  4000km (assuming that all 21 events remain on the calendar in 2017). 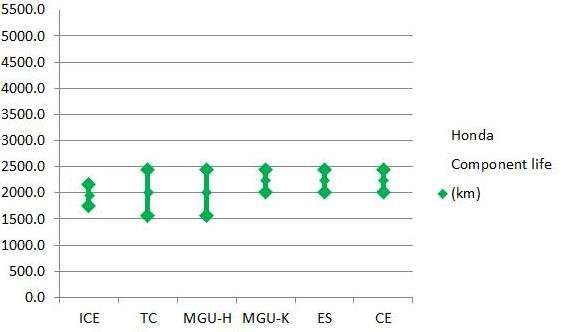 Both Jenson Button (six complete power units) and Fernando Alonso (nine TC and MGU-H, Eight ICE and seven MGU-K, ES and CE) received grid penalties for exceeding the allowed number of power unit elements this season.  While bar far the worst reliability of any of the manufacturers, it is an improvement over last season, but they will need to double their component life if they are to get through next season without penalty.

Overall there have been far fewer penalties this year than last, and reliability has certainly improved.  However with the development tokens now consigned to the history books we could see wholesale changes in power unit configuration for next season, subject to the constraints of the regulations (they will still be 90° V6s with the same bore and stroke).  While this could allow others to catch the dominant Mercedes, unless they now know exactly how Mercedes are making their units more powerful and reliable, it just means more expense for the manufacturers as they build and dyno test different configurations to try and see which is the optimum configuration.  The added complication of increasing the reliability of these components while trying to extract more power while at the same time not dramatically increasing the cooling or other packaging requirements will cause the chasing manufacturers problems. Mercedes will not stand still, and now they have the added freedoms to change their power unit (the same as everyone else) they could also make significant improvements over the winter.  Hopefully the power units will start to converge not only in power output but also in reliability, so that the championship is fought by the drivers of more than one team.

Thanks for the analysis Dave. It is fantastic how the p.u manufacturers have managed to reach the situation where these complex, powerful and amazingly efficient p.u’s can generally meet the five units for this season criteria. That’s amazing engineering. If F1 had stuck to what I think was the original plan (a stable p.u configuation for 6 years, with limited development spend through the token system, and a gradual reduction in the number of p.u’s per year) costs would come down significantly and performance parity would have come about over time….or when everyone shifts to Mercedes p.u’s. The change to… Read more »

I think Renault (and as a by product TAG) have been far more efficient than say Ferrari with their token spend. As you say, they have made a huge gain in power and reliability with a small number of tokens used. Ferrari on the other had, have used all their tokens this year with very little improvement in reliability and only a small gain in power. A very Italian approach, lots of noise and action with limited effect. The reason Renault gave for not continuing to develop their Power Unit is that they want to completely redesign it over the… Read more »

Thanks Dave,
I think the Renault/TAG p.u must have been very close to great if only 3 tokens (and some packaging changes by RBR?) brought it into contention. There would have to be either a bunch of things already at their development limit, or some very smart leap they want to make to justify a complete redesign for next year…….or Renault race team want to distance themselves from Renault/TAG p.u suppliers.
In the meantime, Come on Honda!!!!!!! Lets see this unusual firing order and HCCI technology come together and move McHonda back up where they belong

I was just reading an Autosport article reporting the agreement on the 2017+ p, u rules. http://www.autosport.com/news/report.php/id/124241 I’m sure about the ‘convergence’ rules, first off if they succeed, they will stifle innovation, but they look to be open to gaming. Measuring the performance of each p.u over thr first three, then setting the next seasons constraints based on the ‘power index’ of the best of each type. In a 21 race season, would a the teams be prepared to do a bit of sand banging in the first three ‘flyaway’ races to have an advantage for the rest of the… Read more »

For 2017 each car will get four power units, and with the calendar now set at twenty events, this is achievable today by Mercedes. Other manufacturers need some work to get there, but with the improvements made both Renault and Ferrari should be able to do it, Honda may still struggle (I think they are suffering by only supplying one team).
2018 will be another significant step, and the MGU-K could be the biggest hurdle to overcome, as each car will only have two to last the complete season.

The pace of progress on the p.u’s is going to be intense. It should be exciting to watch, but maybe not to listen to.

The sound was much better this year than last. It is just the volume of the support races (GP 2, GP 3 and Porsche supercup) that makes the F1 sound disappointing. When heard on their own, the sound isn’t bad, it is certainly comparable to late 1980s F1.

I was just being glib with that comment on the sound. I’ve got not no problem with the sound of the hybrid p.u’s, and fewer decibels is just fine by me.
In some ways F1 having a unique ‘sound track’ could be made into a positive, the sound of the future!