As is usual on the Thursday before the Grand Prix the FIA issued  report highlighting the Power Unit components used to date: 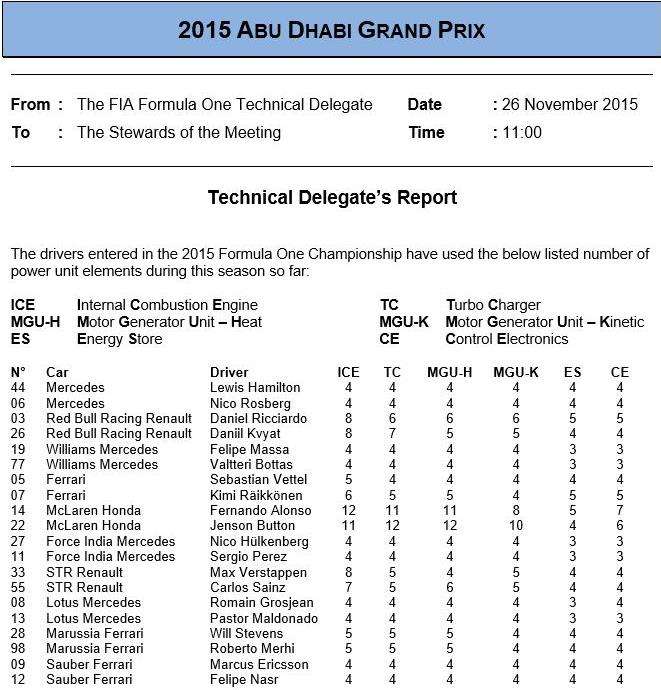 As the F1 circus prepares for the final race of the year, the report demonstrates just how far in front of the opposition Mercedes are.  Remember that the maximum number of complete Power Units (PU) each driver has is four for the entire season.  Every Mercedes powered car is within the four PU total, while of the rest, only Sauber have remained within the Four PU limit.  This could be because they have remained within the initial specification of 2015 Ferrari PU, and haven’t had the in-season developments that the works team have used to bring them closer to the Mercedes outright pace.  This has though been at the cost of using five or six Internal Combustion Engines (ICE) so far.I am sorry to say that I made an error in the last Podcast, and Manor, despite using the 2014 Ferrari PU have not been able to stick within the permitted maximum number for the year.  However the 2014 Ferrari was designed to the 2014 rules when five units were allowed for the season.

For Renault, they have used eight ICE in three of the four cars, and the remaining car has used seven so far.  While the new specification unit fitted to Daniel Ricciardo’s car has artificially raised his ICE use by one (and the older specification unit is due to be used this weekend), this has been a poor year for Renault.  Their reliability has gotten much worse than last year, while the power doesn’t seem to have improved.  They can’t even use the Ferrari excuse that they have introduced new units due to in-season development (with the sole exception of the ICE used by Ricciardo last time out).

Honda have definitely had a baptism of fire on their return to F1.  While the 2008 car and engine was spectacularly poor, they must surely have been hoping for a more competitive showing than this.  They have had neither the required reliability (Fernando Alonso using three times the permitted number of units so far, and Jenson Button only one behind) or competitive power (thanks to problems in storing sufficient energy to last the entire lap).  Honda have at least brought different specification PU components to the races, so hopefully they have learned lessons for the development that must take place over the winter.

With only Ricciardo (ICE and CE) and Alonso (ICE, TC, MGU-H and MGU-K) taking new components last time out, there were comparatively few penalties (for what has been a season dominate by grid penalties for PU component changes).  Oddly enough, the two drivers at greates risk of a penalty this time out would appear to be Mercedes powered drivers.  Both Nico’s (Rosberg and Hülkenberg) have been using their fourth ICE, TC, MGU-H and MGU-K since Singapore.  Rosberg has his previous unit fail in flames at Monza, while Hülkenberg had his first unit (ICE, TC, MGU-H and MGU-K) changed early for Bahrain.  While I expect Mercedes to probably last the distance, it may just hamper Rosberg’s chances against Lewis Hamilton as the world champion tries yet again for win number 44.

This also demonstrates that, while not impossible, it’s certainly highly improbable for any manufacturer to stay within that limit. Mercedes has only proven themselves to be the exception to the rule.
You would think that the FIA would have made a rule easy enough for everyone to follow that they wouldn’t catch anyone violating that rule except in the most egregious of circumstances.

I disagree, it is entirely possible to build a reliable enough power unit to make four units last the entire season. Renault and Ferrari’s insistence that in season development be allowed has undoubtedly contributed to the excessive number of components used this season alongside the pressure of trying to catch Mercedes.
As a separate thought, how much more powerful would the Mercedes be if they didn’t need to be so reliable?

What was the engine usage situation (in relation to the five allowed) at this time last year? It feels like the reliability has gone down this year, suggesting that the more evolved the engines become, the closer they get to imploding.

Mind you, that’s only a feeling – I don’t have the numbers. And that feeling may well be skewed by the silly number of engines used by Honda. But did the Renault-powered cars really go as far as 8 ICE’s last year?

You are correct, the Renault reliability this season is worse than last year (as is Ferrari’s). The equivalent article from 2014 is here:
https://theparcferme.com/f1-news/power-unit-use-update-before-the-final-race/

Hi MIE, when were the power unit component limits first introduced? I think I recall there being usage limits on the previous power unit configuration?

The 2.4 litre V8 engines came into force in 2006 with a rev limit of 19,000 rpm. For 2009 the limit was reduced to 18,000 rpm together with a maximum of eight engines per driver for the year.
With the change to the hybrid power units last season, the other parts were also limited in number per season (previously the KERS system was not controlled by the number of components used per season).
The restrictions were introduced as a way to control costs. In that respect it hasn’t been entirely successful.

‘Hasn’t been entirely successful’ – I love irony ;-) The power unit restrictions were far less intrusive at the tailend of the 2.4l V8 era, 8 per driver was pretty generous when the units were very reliable, so to commit to 5 units of each element of the new hybrids certainly set a challenge for the engineers. Amazingly, a challenge that Mercedes nailed from the start. On the cost of the power units, I keep going back to a Motorsport podcast with Pat symonds where he was saying that back in the first turbo era, they were spending far more… Read more »