Power Unit Use – Update before Austin

On Thursday 19 October 2017 the FIA published its usual report into the number of Power Unit (PU) elements that had been used to this point in the season.  This report is below: 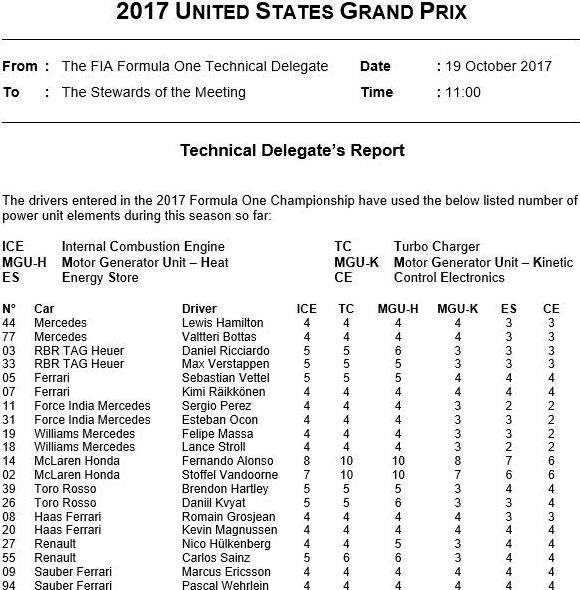 As can be seen from the report, every Honda and Renault  powered driver has already exceeded the allowed four PU allocation for the season.  They are joined by Sebastian Vettel who to date is the only driver powered by Ferrari to exceed the allocation.  However, all the Ferrari powered drivers and the works Mercedes team have used elements of their fourth PU early in the season, meaning that these last elements may be required to be used for far more than five race weekends.  The four customer Mercedes drivers (from Williams and Force India) are the only ones who have managed to fit new PU elements in line with a schedule where each element lasts for five races.

Before Free Practice 1 at Austin several drivers required new PU elements to be fitted, and for some this will result in grid penalties.

For Hartley, this is the first element of PU number 6 that the car has used (it doesn’t matter that he has not driven this car before this year), and so he will get a ten place penalty.  For the other two drivers, they have already used other elements of those power units earlier in the season and so each will get a five place grid penalty for the new ICE being used.

Turbocharger – TC Only Nico Hülkenberg has so far required a new TC, his fifth.  As a result he gets a further five place grid penalty.

As Hartley has fitted the ICE from PU number 6, he will only get a five place grid penalty for the use of this element.  Hülkenberg meanwhile will get a ten place penalty, as this is the first element of PU number 6 that he has used.

As this is within the four PU allocation each driver has for the season, they will not have any grid penalties for the use of these elements.

Only Hartley picks up a grid penalty for exceeding the PU allocation, and this will be a further five places.

Similarly, only Hartley gains a grid penalty, yet another five places.

No new PU elements were reported for Free Practice 2, so the total grid penalties resulting from the first day of practice are:

Further grid penalties may occur through PU elements being required in Free Practice 3 or Qualifying.  I am still expecting the Ferrari TCs to be replaced in Räikkönen’s car and in the Haas team before the end of the season, just because they lost one early in the year.  If they get to the end of the year without taking grid penalties then it is a good early sign for the increased reliability required in 2018.

He's always been a diva. Now he's getting older the…

Regarding Lewis' motivation, I think he might go through the…

Lewis is an amazing driver, but he's become accustomed to…

I have question for Paul. I made a joke on…

I don't think Lewis, George or anyone at Marc cares…

It is embarrassing to hear old men riff on stuff…