Power Unit Use – Update before Bahrain

This year with only 20 races in the season, the number of power units available to each driver has been reduced to just four for the entire season.  This means that each power unit element should be lasting for five whole race weekends, with changes expected at Monaco, Hungary and Japan (race 6, 11 and 16 respectively).  With the token system gone, the manufacturers are free to develop the power units as they wish through the season, but it they introduce changes earlier than these events, then the new components had  better be more reliable as well as more powerful in order to avoid penalties towards then end of the year.

One other change worth noting for this season is the removal of the rule regarding stockpiling of power units.  Last season, Lewis Hamilton and Fernando Alonso were able to minimise their grid penalties by using multiple new power units over a single race weekend.   The combined penalties meant that they started from the back of the grid, but only for that one race, while they had enough components to last to the end of the season.  This year, the only power unit components that a driver can use in subsequent race weekends without penalty are the ones he uses during the race (new components fitted during the weekend, but changed before the race will still attract grid penalties, but will not be available in subsequent races without incurring an additional penalty).

The FIA published its usual report into the power unit elements used during the season to date on Thursday: 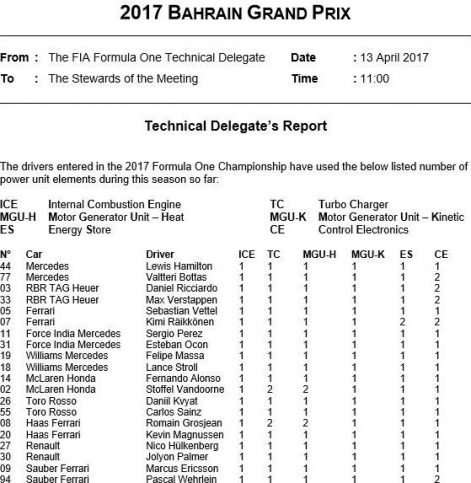 Kimi Räikkönen had already used a second Energy Store (ES) and Control Electronics (CE) at the Australian Grand Prix.  These elements have been the most reliable of the six that make up the power unit since the introduction of this generation of hybrid engines, and so Ferrari should be able to get Räikkönen to the end of the season without penalty.  However it is concerning that they have had failures so early in the season.

In China, two drivers needed new Turbochargers (TC) and Motor Generator Units – Heat (MGU-H).  These items are normally changed together, I suspect because they are assembled as a single item for balance spinning at up to 125,000rpm.  The drivers affected were Stoffel Vandoorne and Romain Grosjean.  While it isn’t that surprising to see the Honda items fail so early in the season given their reliability issues during previous years and in pre-season testing, the failure of the Ferrari unit is unexpected particularly after the trouble free way they went through pre-season testing.  With Räikkönen’s failures as well, that is four of the six power unit elements that have shown signs of weakness after only two race weekends.  I hope these failures are not indicative of some weakness in the Ferrari, especially as it looks like Ferrari are in a good position to make a championship challenge to the Mercedes team.

The other drivers requiring fresh components last time out all needed new Control Electronics.  This time four drivers were impacted: Valtteri Bottas; Daniel Ricciardo; Max Verstappen; and Pascal Wehrlein.  This means that all four power unit manufacturers have had at least one element of their PU fail after just two Grands Prix.  This includes the 2016 Ferrari Power Unit as used by Sauber, so even using components that have been proven for the previous 12 months is no guarantee of bullet proof reliability.  It would seem that this year is also going to be affected by grid penalties for power unit changes nearer the end of the season.  Hopefully it will not impact the championship battle at the front of the field

The other thing to watch is the Renault powered teams.  They have been forced to run the heavier 2016 specification MGU-K in the opening races of this season as the 217 unit prove troublesome in pre-season testing.  Renault want to fit the revised 2017 item as soon as possible, as it will bring a performance advantage.  However if the fit it for the fourth race in Russia as currently planned, each item will need to last for six race weekends rather than the normal five.

I had thought that the need for these articles would stop once this formula had been running for a while, but it appears that the manufacturers are still pushing the technology to the edge of the reliability so it is yet another thing to take into account for the whole season.  With potentially greater in season development of the power units, and some real competition from another team,  Mercedes my be put under pressure so their reliability suffers more than it has in the past.

Things are looking up! Well for McLaren and Renault they are.
Looking at the similar update from 2015 they were blowing through components at about three times this rate.

Apart from the official “FIA technical delegate report” for every race weekend individual season which covers the “goings on/happenings” on every part of the individual car and the season itself of which the trend is to pick-out the part of the report concerning the six components that make-up the power unit, plus occasionally the gearbox use, there is much more/a lot going on which is not talked about because it concerns failed replaced parts who’s use in number are not restricted by the rules, but nevertheless adds-up to the overall reliability of a car or lack of it. People tends… Read more »

The full report of what was changed under pace ferme is here:
http://www.fia.com/file/55238/download?token=VCSSHWC_
The extensive list of parts replaced on Giovinazzi’s Sauber highlights how hard the team’s have to work to repair accident damage.
Note, this report only covers the parts changed while the cars are in part ferme (i.e. from the start of qualifying until the race). Before this teams are free to change any part on the car, only the six power unit elements and the gearbox are of concern to the FIA.

Yes the list of failed replacement parts is sometimes extensive, more so when accident damage is incurred. The FIA delegate race week-end report covers all of that and much more than when cars are in park ferme or just the restricted PU six elements and gearbox. Also after china race of which is actually out of topic on this page, but might be of interest to some, re Kimi Riakkonen second consecutive race problems, claimed engine and handling (front end) problems. FERRARI “the team”: looks like the 2015 Canadian engine mapping selector (driver selector on steering wheel) problem when exiting… Read more »

While Mercedes have suffered more reliability issues than in previous years they still look to be ahead of the other manufacturers. Renault look to be suffering more problems than even Honda at this stage of the season.

With more smoke in the second free practice session from the Toro Rosso of Sainz, I suspect that these won’t be the last new components to be fitted this weekend.

Sainz only needed a new MGU-K before FP3, yet Vettel fitted his second TC, MGU-H & ES. While worryingly for Honda, Vandoorne needed his third TC & MGU-H and we haven’t even had three complete race weekends yet.

While in pace ferme prior to the race Sainz fitted a complete new Power Unit and Alonso needed a new ICE, TC, MGU-H & MGU-K.

I can certainly see that applying to the changes made before FP2, but teams aren’t under the same time pressures before FP1.
So many components being changed is particularly surprising as the mileage completed in China was much less than a normal Grand Prix thanks to very little running on the Friday.