Power Unit Use – Update before Baku

Despite a false start (where the first FIA Technical Delegate’s Report issued on Thursday showed that every driver was on his first element for every component of their Power Unit), the correct report was published as usual on the Thursday before the race: 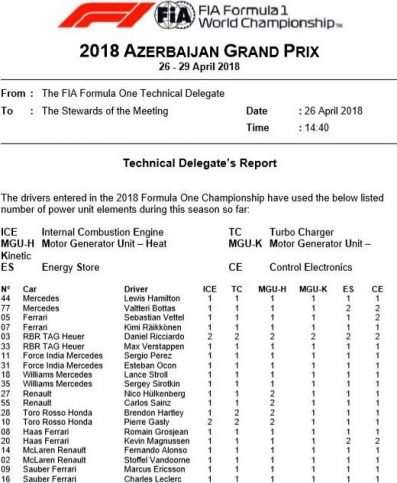 In China it was the Renault powered teams turnn to have problems, with Danial Ricciardo needing a complete new Power Unit over the course of the weekend.  He fitted his second ES and CE prior to running in Free Practice 1, and the remaining elements (ICE, TC, MGU-H and MGU-K) in the gap between Free Practice 3 and Qualifying.  Given how successful the race was for the Red Bull driver, it was worth the effort the mechnics put in to get the car out just in time to get through Q1.

The works Renault drivers also fitted a new MGU-H (their second) prior to Free Practice 3 on the Saturday in China.  It could be that Renault are also now planning on taking some tactical grid penalties in order to catch Ferrari and Mercedes.

As I write this on the Friday evening of the Baku weekend, no driver has fitted any further Power Unit elements so far this weekend.  Given the reduced number of elements available this season (three ICE, TC and MGU-H while only two MGU-K, ES and CE) it is hoped that there will be a large number of the races where no driver needs to fit any new Power Unit element.  It is also concerning that the previously most reliable elements (the ES and CE) have been the most common to be replaced so far this year.

With this circuit having the highest top speeds on the calendar, it is possible that the Power Units are put under more strain here than elsewhere, but the ICE, TC and MGU_H will have to last for seven complete race weekends, and this is only round four.

another power unit for number 33 will be added to that list tomorrow.

Your crystal ball appears to be broken. No-one has fitted any new elements this weekend.

I am not one that looks at crystal balls, if what I quoted was not a fact those that reported it were wrong. to be honest this morning and from on a different source a sensor was muted as the problem with the power unit.

Your statement was wrong. Verstappen did not fit a new Power Unit. If you didn’t believe it, then why repeat unsubstantiated rumours?

I was quoting a usually reputable site reporting, as English as they come, when I read it I had no cause to doubt them as I don’t have a cause to doubt the FIA power unit element usage reports you forward on here.

Is it known if any of the replaced elements can be reused, or if any are now scrap?
It looked like Gasly and Ricciardo’s I.c.e’ s are probably well and truly poked, but whatelse has failed completely?

With the system/rules as are race report will list an element pulled and used from the pool of what is allowed. as to what is scrap and what can be reused, We have either to rest with what is reported or calculate ourselves as anything replaced up to the number allowed can be re-used (mixed and matched).

And just in:- gearbox penalty for Hulk.