As the Formula one circus resumes racing after the summer break we are just past the halfway point of the season, with the Grand Prix held at Spa being race twelve in the twenty race season.  With each driver allowed only four complete Power Units to last the season, drivers should have been just using their third elements for the first time at the last race before the break in Hungary.  That is assuming that they are splitting the season evenly between their four allocated  Power Units, using each for five race weekends.

Looking at the table of Power Unit elements used below we can see that this is not the case for the majority of the field: 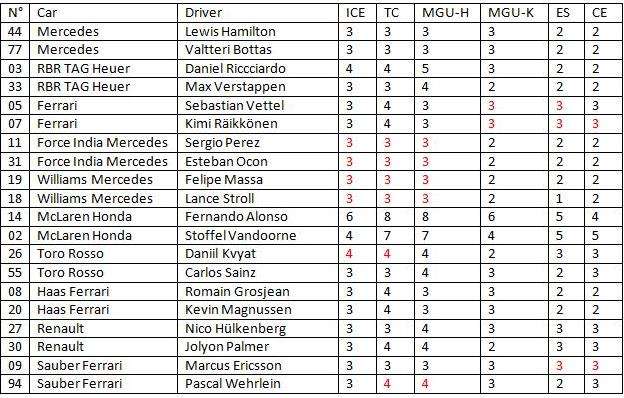 Numbers in red indicate the elements that were used for the first time during the Hungarian Grand Prix.  As can be seen, the only drivers keeping to the schedule of changing their Power Unit elements every five races are the customer Mercedes teams (Williams and Force India).  Everyone else has used some of their elements early.  That may be storing up potential grid penalties for later in the year (or the drivers may have to suffer a drop in performance as some elements are used beyond their ideal design life).  The works Mercedes team used their second Internal Combustion Engine (ICE), Turbocharger (TC), Motor Generator Unit – Heat (MGU-H) and Motor Generator Unit – Kinetic (MGU-K) in the fifth race of the season (one race early), and they have yet to recover that lost race, so the third set of those four elements was also used a race early at Silverstone.  This may have been tactical, to give a performance boost at the more power hungry tracks at Barcelona (race five) and Silverstone (race ten) rather than the less demanding circuits of Monaco (race six) and Hungary (race eleven).

The 2017 Ferrari Power Units have not shown the life necessary to get to the end of the season without grid penalties.  Both the works team and the customer Haas outfit have already used all four of their available TC elements.  While all four drivers possible have two working turbochargers to get them to the end of the season, it is unlikely that these four drivers will get to the end of the year penalty free.   The Sauber team using last year’s Power Unit has fared a little better, with Marcus Ericsson on his third Power Unit, but Pascal Wehrlein has already needed to use his fourth TC and MGU-H.  He can also expect penalties at some point.  With the closing of the loophole exploited by the Mercedes team last year (allowing Lewis Hamilton to stockpile a large number of Power Unit elements through multiple changes in one weekend), teams will have to decide when they want to take grid penalties.  This is particularly relevant this weekend, as Spa is a circuit where the faster cars can reasonably expect to overtake slower competitors to recover from a poor grid slot.  Such good opportunities may not present themselves later in the year.  Ferrari in particular will have to gamble if their drivers will need to take any penalties this season, as this may be the least damaging race at which to take them.

All the Renault drivers (at Red Bull, Toro Rosso and the works team) have used all four of one or more of their elements, with Daniel Ricciardo already taking a penalty for using his fifth MGU-H.  They can all expect grid penalties before the end of the season.  Again, some may gamble and take the penalties this weekend, although they do not have the performance of the works Ferrari team, so for them overtaking won’t be as straightforward.

McLaren Honda have suffered most this season with grid penalties, and this can reasonably be expected to continue, although the last race was the first weekend of the year when they did not need a new Power Unit element fitted to either car.  Their reliability is improving, but I would expect the development of new Power Units to continue to require new elements to be fitted to allow the team to progress.

While no driver should be desperate for new parts to be fitted this weekend, several may be fitted for either  tactical reasons (Spa being a track where overtaking is possible) or because the manufacturers have developments which release additional power that the teams want to fit.

Well I was wrong, it was Mercedes who blinked first and fitted an upgraded set of PU elements. With two power dominated circuits (Spa and Monza) they must be concerned about the Ferrari threat to introduce their final unit this early. It does mean that they will need to revert to the older (lower power) unit for three or four of the remaining races.
Power Units (and penalties for using too many) could still decide this championship.

I don’t see were you was wrong as the table you produced is all about power unit use update before Belgium. They (Mercedes) for SPA introduced their 4th ICE, TURBO and MGUH when their previous engine had done just two races, as I said elsewhere, unless they detected some reliability problems it has more to do with oil consumption rules taking effect from Monza. but then we were assured by the usual speculation pushers that it was FERRARI that was making use of oil for combustion, with even a hint that the one that left FERRARI to Mercedes took that… Read more »