Last Thursday, before the start of the Mexican Grand Prix weekend, the FIA  published its list of the Power Unit elements used so far this season: 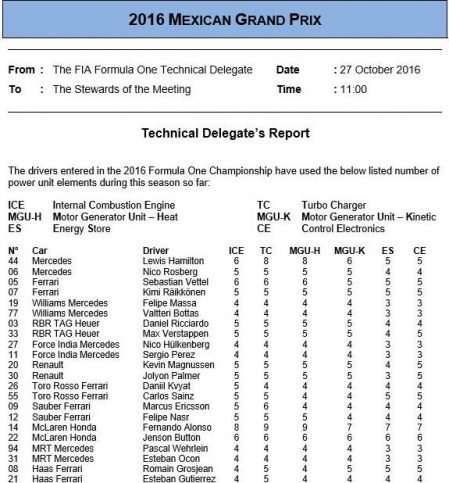 The only new elements fitted over the weekend were Energy Stores for the two works Renault drivers, taking Kevin Magnussen up to number five and Jolyon Palmer to number four.  So close to the end of the season, all planned changes have been done, and with the exception of the customer Mercedes teams, any further components required are likely to result in a grid penalty.  So who is most at risk?

Looking at these graphs, it is the Sauber pair (Marcus Ericsson and Felipe Nasr) who have used their current ICE for the longest time, with their fifth ICE fitted in Belgium.  While this was also the race at which Lewis Hamilton first fitted his sixth ICE, Hamilton had fitted three new ICE that weekend and so had a stock to use until the end of the year.  Sauber are trying to make theirs last for nine races, this would be a remarkable run of reliability if they manage it, but certainly won’t help them as they try and score their first points of the season.

Ericsson again has been running his sixth TC since Belgium, while the Haas pair (Romain Grosjean and Esteban Gutiérrez) alongside Ferrari’s Kimi Räikkönen have been running their fifth TC since Italy, and making this component last for eight or nine races is also not conducive to hard racing.  While Red Bull are looking increasingly secure in second place in the constructors’ championship, it is Sauber again who will feel this most.

While several drivers have used their current MGU-H for a long time (Carlos Sainz fitted his fourth unit back in Britain), they still have another item to use.  Once again Hamilton fitted several items in Belgium to build a sufficient pool that should see him to the end of the year despite the failure in Malaysia.  The longest lasting MGU-H that could cause a penalty is fitted to the Ferrari of Sebastian Vettel, who fitted his sixth in Singapore, and it will have to last seven races to get to the end of the season. 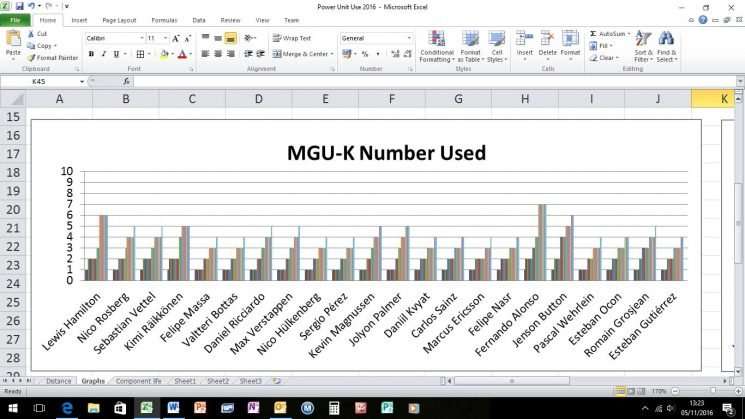 It is Ferrari’s Kimi Räikkönen and McLaren’s Fernando Alonso who have the longest lived MGU-K (alongside Lewis Hamilton), both having fitted their current unit in Belgium.  Alonso though did copy Hamilton to some extent, and fit a number of complete power units that weekend.  The Ferrari could be in trouble.

As the graph shows, very few drivers have even reached five ES through the year, and while both Honda powered McLaren’s have picked up penalties in the past for exceeding the five permitted, Fernando Alonso fitted his seventh unit in Malaysia and Jenson Button in Japan.  This means Alonso would need his to last six races and Button needs his to last five races.  Both of these should be possible, but the Honda has still been the least reliable of the four power unit manufacturers.

While the McLaren pair are in the same position as they are for their ES, it is Red Bull’s Max Verstappen who is trying to make his CE last for an incredible fourteen races (having fitted his fifth and final allowed unit back in the European race in Baku).  However with no moving parts, this has historically been the single most reliable element of these hybrid power units.

So the final two races could be affected by grid penalties for some of the drivers, however the only real impact it will have on either drivers’ or constructors’ championship is on whether Sauber are able to score that crucial point.  However as they have been struggling to get out of Q1 recently, any grid penalty is not as significant for them as for some of the front running teams.

Do you think it would be possible to determine the number of races for each component for each driver? I guess you could look at which races they replace things at, and then from that assume that the component replaced is done, and no longer useful. Although Lewis’ tactics this year with the double penalty nullifies this analysis.

The teams only have to say when they fit a component that has never been used before. I get the impression that many fit older components for the Friday practice sessions. Although it is possible to change a power unit between FP3 and qualifying, time is short, and it doesn’t seem to be a planned change.
The best I can do is work out the average component life (in km run).

With no-one fitting any new Power Unit elements in Brazil, as shown by the FIA report here:
http://www.fia.com/file/51064/download?token=2gygUReL
There isn’t much point in a separate article for Abu Dhabi, as the comments made above apply this weekend as well.