Power Unit Use – Update before Brazil

As we approach the penultimate race of the season, the number of Power Unit (PU) components used so far are far in excess of that permitted by the regulations for the majority of the teams.  The exceptions are the four Mercedes powered teams (Mercedes, Williams, Force India and Lotus) and the Sauber Ferrari team.  The report issued by the FIA on Thursday shows the number of components used up until the beginning of this weekend: 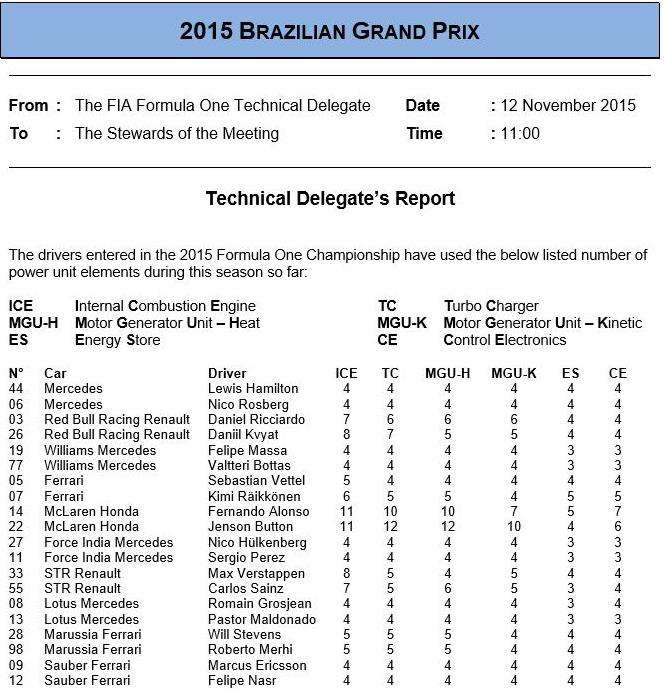 As I write this following Free Practice 2, Daniel Ricciardo has already used an updated Renault Internal Combustion Engine (ICE), which will take his total to eight, matching Daniil Kvyat and fellow Renault user Max Verstappen.  This is the updated units, with Renault finally spending 11 of their 12 allowed tokens for in-season development.  With rain forecast for Saturday, and Red Bull choosing to run different down-force levels on their two cars, it may be difficult to judge how much of an improvement the Renault development offers.

Renault have certainly dropped back in their competitiveness this season compared to last, not helped by the failing relationship with their two teams, and the resultant lack of development.  The development they made over the winter while not helping them catch their Mercedes rivals was also insufficient to keep ahead of Ferrari.  In addition their reliability has plummeted.  Last season teams were allowed five complete PUs, and while all the Mercedes and Ferrari powered teams managed this, Renault did suffer with four cars requiring six ICE and one needing seven.  However as can be seen this year, they have already used more than this number and the allowance of complete PUs has dropped to four.  In 2014 Renault were getting between 1900 and 2600 km for each ICE used, this year the figure has dropped to between 1330 and 1730 km.  Whether the fault lies with the Renault design or the way the teams (Red Bull and Toro Rosso) have packaged it I don’t know, but it could be part of the reason for the relationship breakdown.

In comparison, the Mercedes PUs are lasting between 2470 and 3040 km per unit (and this figure will grow if the units do not require changing during the final two events of the year. Ferrari are harder to classify, as the works team have had a different specification of unit for most of the year.  The Sauber reliability figure has improved from 2400 km per ICE to 2700 km, but the works team reliability has fallen from 2600 km to 1800 – 2300 km per ICE.  The added power provided by the in-season development has certainly had an impact on the reliability.

Honda however make even Renault look good on reliability.  The Japanese manufacturer has had a steady rate of spending their development tokens, and have thrown new PU components at the car all year.  With Alonso suffering another failure in Free Practice 2 (with flames from the exhaust and an instruction from the team to stop the car) this situation is only going to get worse.  The 11 ICE used by each driver so far this year have only averaged around 800 km (which is around the typical distance of a trouble free race weekend).

So far there will be penalties for Ricciardo (through taking the updated Renault ICE) and most likely for Alonso, if he needs yet another new ICE.  With the championships settled the PU manufacturers are most likely concentrating on the developments in preparation for next year.  Getting all their in-season tokens used ready for the next sett of tokens that can be used over the winter.  Hopefully not only can the others start to catch Mercedes on outright performance, but also on reliability.

Apparently Fernando is going to use the PU that he had in Mexico so no grid penalty this time So that means he can finally start the race in front of the Manor’s. Hooray. Progress at last. LOL

Events in qualifying conspired against him, and Alonso will take another new PU into the race. Still it a relatively small 35 place penalty this time out.
http://www.autosport.com/news/report.php/id/121812

Yes I saw that after qualifying. 12 new PU’s this season so far. I really am despairing for Mclaren this season. I can’t imagine how Fernando and Jenson must feel at the moment. What a crying waste of talent. I really hope that Honda can make big improvements for next season.

Under the original penalty rules, McLaren would be starting from the back row of the 2017 Brazillian GP with all the penalties they have pickedup this weekend.

Was it the F1 strategy group who put the regulations for these power units together? They set an almost unsurmountable challenge, with very tight provisions for suppliers who ‘got it wrong’ to undo their mistakes.
I wonder how much Ferrari are having to spend to try to get on par with Mercedes, and how much more Renault and Honda are having to spend to even get to a competitive p.u.
I love the technology, but what a mess the p.u’s have created for the F1 teams.

If in season development was banned then the customers would get the same specification as the works team that would help. A maximum selling price for the PU (€12,000,000) would make it more affordable for the customer teams and may discourage the works outfits from spending excessive amounts on development.

I see where you are coming from, but What would Red Bull and McLaren’s season look like if there was no in season development?

spot on.
If Ferrari had not opend the loop hole last winter, Renault and Honda would have been destroyed by the image loss they would have had by the end oth the season.
Marussia would have had more constuctor points than McLaren …

McLaren’s season would be a write off, so not much different to now. Red Bull’s season may have been better, as Renault would have had no reason to hold onto development tokens for use in season that never really happened.
The big winners would be the Mercedes and Ferrari customers who would have had the same specification power unit as the works teams. Just look at how Sauber have dropped off during the season compared to how they started.

The information I have seen quotes 11 tokens used.
http://www.autosport.com/news/report.php/id/121805
It makes sense to use all the tokens this year even if it is just before the winter break if it helps improve the power and reliability for next year.
An updated PU doesn’t need to be used in the races, the change just needs to be registered with the FIA before the end of the season.

Then croft and Brundle must have got it wrong, Kravitz said 11 tokens blah blah and he was corrected by Croft live skysports only 7 tokens used on current PU..fair enuff but how can RBR judge any gain in performance without the other 4 tokens in play Turbo etc..it could only be for reliability

Well as Daniel only had a new ICE it is entirely possible that the extra development tokens were spent elsewhere. The updated Renault has been available since Austin. Until now none of the updated components had been used, but as the modification has been registered with the FIA those tokens have been spent.