Power Unit Use – Update before Britain

The FIA have modified the PU rules to allow new manufacturers the use of a fifth PU during their first season without penalty. As both Button and Alonso have already taken substantial penalties for their fifth (and in Button’s case sixth) PU components, presumably this will apply to the next new components that Honda have to use on both cars.  This should guarantee that no PU grid penalties will affect this weekend.

The FIA report into the Power Unit use so far was issued today: 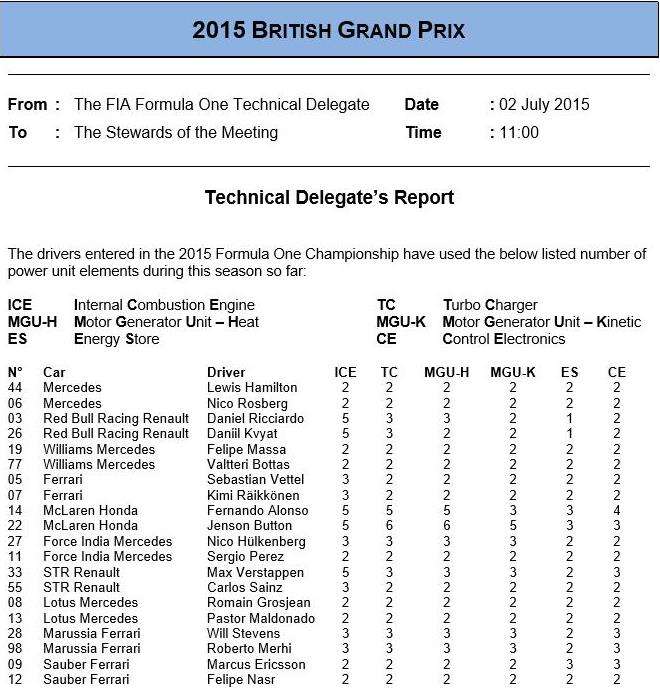 With only eight of the nineteen races completed only the Mercedes powered teams are on track to get to the end of the year without penalties. With both Red Bull’s and both McLaren’s taking penalties for new Internal Combustion Engines (ICE) in Austria, and Max Verstappen taking a penalty for his fifth ICE in Canada I had hoped that there wouldn’t be ICE related penalties this time around. However with Fernando Alonso’s new ICE being damaged in his first lap incident with Kimi Räikkönen another ICE is required for Alonso’s car. At present Honda are hoping to use one of the units used so far so that they won’t serve a further penalty, however as these were deemed unsuitable for use last time out, I do wonder if they will last through free practice and qualifying. Jenson Button also had to retire early from the Austrian Grand Prix, so he may have to take further PU components. The graph below shows each driver’s ICE use through the season, indicating that both Force India drivers also took a new ICE last time out (but remained within there allowable usage for the year).

The McLaren pair also took penalties for new Turbo Chargers (TC) in Austria, in Button’s case for the second race in a row. The Force India pair and Max Verstappen also had a new TC fitted for the last race. As can be seen from the graph, only the Honda powered pair are close to gaining any further penalties for any additional TC use this time out.

Unsurprisingly given their penalties last time out, the McLaren pair took new Honda Motor Generator Unit – Heat (MGU-H) in Austria, the second consecutive race they had done so. Both Force India’s also used new MGU-H’s, and again only McLaren are close to taking any further penalties this time out.

The same four drivers also took a new Motor Generator Unit – Kinetic (MGU-K), but this time only Button needed a penalty, and he remains the only driver at risk of further penalty this time around.

No one needed a new Energy Store (ES) in Austria, and this is the least likely component to cause a penalty as only three drivers have so far used their third ES (both McLaren’s and Marcus Ericsson).

Both Manor cars took new Control Electronics last time (their third), but once again t is a McLaren driver who is at risk of a penalty if they take a new unit this time out. For a change it is Alonso who is most at risk rather than Button.

So overall, the only drivers at risk of penalty this time are the McLaren pair, and that is only due to damage sustained to the new components fitted for the last race.

Isn’t it sad that the remaining races will be determined by petty rules, bean-counters and race car testing disguised as “racing.?”

I’m thinking……….not so sad really, there seems to be lots of agreement that F1 needs to get its costs in order and thats what the pu component restrictions are about. The racing is currently pretty good and will probably get better as the Renault and Honda p.u’ s improve and the cars start to carve their way through the field during races. And if not we’re still seeing much better competition than in the ‘glorious first turbo era’ where most of the engines had less than a 50% liklihood of finishing any of the races – check out MIE’s then… Read more »

Yes it is really sad, it is not racing anymore, it is about rules and the FIA ego! I guess only when there are no fans watching they will understand and we have all seen the interest in F1 going!

The CE is not the standardized McLaren unit everyone is using, or is it a different component?

The standardised McLaren unit deals with the control of the fuel maps for the ICE and the gearshift controls. The same unit has been used since 2008 and allows the FIA to check the teams software to ensure they aren’t introducing traction control or anything else that is banned by the regulations. The CE deals with the recovery of energy from the two MGU’s, the storage into the ES and feeding the stored energy back into the two MGU’s. It is also possible to recover energy from one MGU and feed it straight to the other without going through the… Read more »