Power Unit Use – Update before Canada

As the F1 circus moves across to North America for the first time this season, the FIA report into the Power Unit elements used so far looks like this: 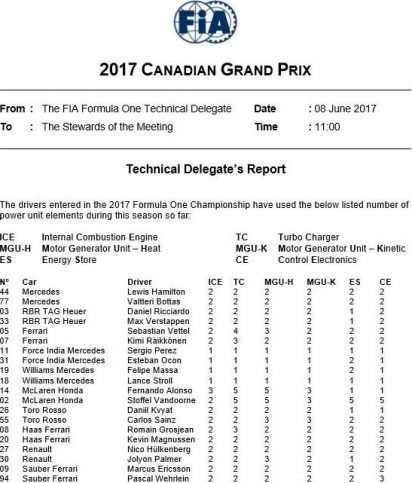 Jenson Button picked up a fifteen place penalty for fitting the fifth TC and MGU-H to be used in the car now back in Fernando Alonso’s hands.  With Honda stating that the MGU-H is currently good for only two races, expect Stoffel Vandoorne to pick up further penalties this weekend.  In fact, team-mate Alonso is the only other driver likely to pick up an penalties.  Only Ferrari’s Sebastian Vettel has  used four of any Power Unit element (his TC), but he has only needed to use this many because of the need to change his ICE, TC, MGU-H and MGU-K before qualifying in Spain.  This was to cure a fluid leak, and was the fastest way to solve the problem in the short time available between Free Practice 3 and Qualifying.  As a result it can be assumed that he still has two working TC, and it may be some time before he needs to take his fifth element.  It is however extremely unlikely that he will make it to the end of the season (another 14 race weekends) without taking a penalty, it just won’t be this weekend.

The other noteworthy aspect is the four Mercedes customer cars (Force India and Williams).  They are still using their original Power Unit (with the exception of the ES in Esteban Ocon’s and Felipe Massa’s cars.  With 20 races in the season, each Power Unit has to last for five race weekends, these have all lasted for six race weekends.  To make matters even more impressive, three of those four Mercedes customer cars have topped the distance covered so far in this year’s championship.  Ocon tops the table covering 4402 km in the six race meetings held so far, with Massa on 4353 km and Sergio Pérez on 4303.  Lance Stroll who has had several DNFs so far has only covered 3670 km, but is still only 13th in the list of distance (in km) covered: 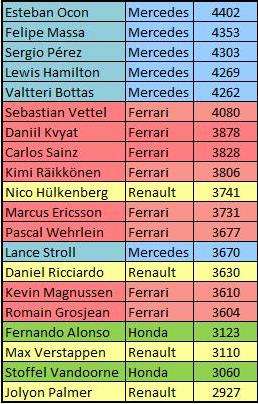 I expect these customer Mercedes teams to take their second Power Unit (or at least the ICE, TC, MGU-H and MGU-K) this weekend.  With Honda announcing today that their upgraded PU is not yet available, any new Honda elements will be for reliability not performance reasons.  The other drivers have already taken their second elements, and need to make these last now until Hungary if they are to survive the season penalty free.

Thanks Dave, these updates and your analysis really keeps us up to date with where the teams stand with their p.u allocations.
Things look pretty marginal for Ferrari, at the current rate of usage it won’t be long before they are taking penalties, which could threaten their positions in both WCC and WDC.
Its interesting that both Ferrari and Mercedes are the heaviest users of components for their respective p.u’s. Do you think they are running them with higher output than their customers to achieve their front running positions?

Yes, I do think they are pushing their power units harder than the customer teams.

Kevin Magnussen needed his third TC for Free Practice three. This was the only new power unit element fitted this time.

While some of the drivers that took-on new PU elements are in a position to still using the used/older elements during a race weekend FP1 and FP2, the number of laps which on average amounts to a race distance, and in effect being able to keep mileage of their race engines to a minimum, some others are not in a position to do that, because of failure of the replaced elements.
An example was Vettel having to revert to race his number one power unit (ICE).

Before qualifying Honda fitted some new elements. These were limited to Alonso’s third ES and CE, so for the first time in three races there should be no penalties for power units this time.
It will be interesting to see if Vandoorne gets to the end of the race, as this will be the first time a Honda TC and MGU-H will have lasted for three races.

Previous articleMcLaren at ‘fork in the road’ with Honda
Next articleFBC Track Talk: Canadian Grand Prix