On the Thursday before the race, the FIA publishes the report into the number of Power Unit (PU) elements that each driver has used so far in the season.  With the season now past its halfway point, as we prepare for the twelfth race of this twenty one race season, the elements used so far are: 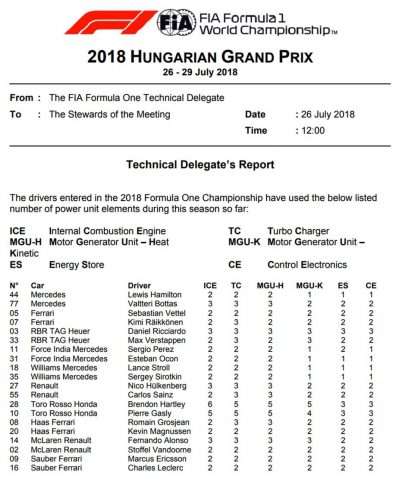 Two drivers took grid penalties last time out in Germany.  Pierre Gasly fitted a complete new PU following a poor qualifying, this was his fifth Internal Combustion Engine (ICE), Turbocharger (TC) and Motor Generator Unit – Heat (MGU-H), his fourth Motor Generator Unit – Kinetic (MGU-K), and third Energy Store (ES) and Control Electronics (CE).  Daniel Ricciardo just fitted his third MGU-K, ES and CE prior to Free Practice 1.  This was enough to send him to the back of the field (until Gasly took his penalty later), and so it is odd that he didn’t also take the opportunity to fit a new ICE, TC and MGU-H.  However the relationship between team and PU manufacturer is strained at the moment as they come to the end of the contract for Renault to supply Red Bull.  Renault have said that the elements did not need changing as they were not at the end of their predicted life, and they would rather wat until an upgraded specification was available (see AUTOSPORT).   However the third ICE, TC and MGU-H were fitted to Ricciardo’s car in Canada, and had potentially completed four race weekends already (so as least as much as the previous two sets that he had used).  He would certainly have needed more of these elements before the end of the season, and Germany would have given him the opportunity to add to the pool available without further grid penalties.   For whatever reason, this opportunity was not taken, and when the car failed in the race due to loss of power, it is likely that Ricciardo will have another race with grid penalties.

Of the Ferrari powered drivers, Räikkönen and Grosjean may attract penalties, both have used three TC and the Haas driver has used his final MGU-H.  These components were first fitted in Canada, so are likely to need replacing at the more power sensitive circuits (Spa and Monza) that follow the summer break).  All have used both CE and ES available.  These are usually reliable components with no moving parts, and would not normally be a cause for concern.  Also as we have now passed the halfway point, it is expected that the second of these elements would be used.  As stated above, all have just fitted their second MGU-K, again this is on track to last the season. 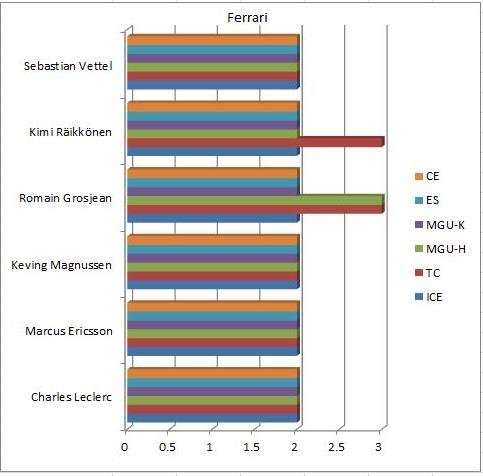 Mercedes are in a better position for five out of their six drivers.  Valtteri Bottas is the odd man out having used his complete allocation following the issue he had in Austria.  It is likely that he will pick up a grid penalty before the end of the year, but this will probably be timed to follow the next PU upgrade that Mercedes introduce.  I would expect that the remaining five Mercedes powered drivers will take their second MGU-K, ES and CE at this race (other than Sergio Perez, who has already used his second ES). 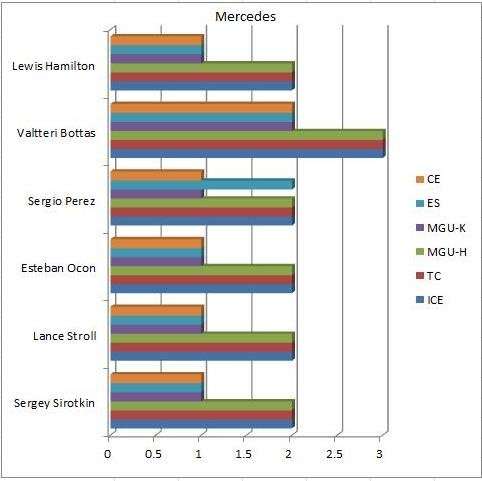 The Renault drivers are in a much more precarious position, all have elements where they have already used their allocation for the season, and of these it is Ricciardo that is most likely to suffer grid penalties in Hungary. 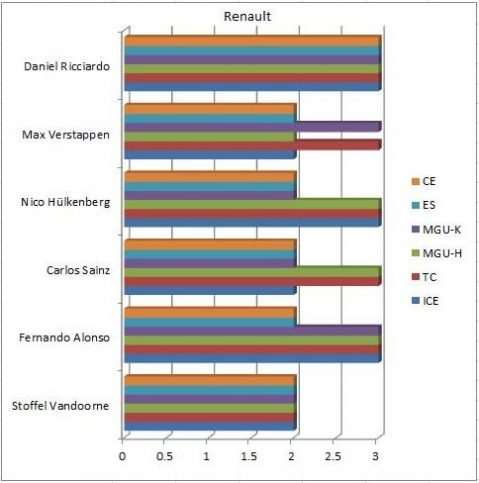 Despite Christian Horner’s statement that Toro Rosso would not be sacrificed to allow Honda to develop their PU, the fact that their two drivers have used five or six PU in only eleven races indicates otherwise.  I see no reason for this situation not to continue as Honda makes up for lost time in catching the other manufacturers.  It certainly seems to be working, with the team more competitive than their predecessors McLaren ever were with Honda power.  Also they don’t necessarily seem to be suffering as many failures as in previous years, even if the elements don’t have the time in the car to do the required mileage.

Well I didn’t expect that. The Ferrari customer drivers have taken their third ICE, TC and MGU-H before going out for Free Practice 1. (Except Romain Grosjean, who only fitted a new ICE, as he had already used his third TC and MGU-H).

No sign of new parts for Ricciardo yet, hopefully there is enough life left in his older components to last this race.

Hamilton has fitted his second and final ES & CE before Free Practice 3. This is on target to get to the end of the year with no penalties.

It looks like Red Bull are not planning to give Ricciardo any new PU this weekend, preferring to start at the front with a small power deficiency, than suffer grid penalties.