Power Unit Use – Update before Hungary

As we approach the halfway point of the season (race 10 of 19), teams should normally expect to be putting the final miles on their second set of Power Unit (PU) components.  This article on the Hungarian GP from an engines point of view, indicates the relative stress on each of the PU components, with the Internal Combustion Engine (ICE) receiving little stress, although the Turbocharger (TC) will suffer rather more.  The FIA published the regular list of components used so far in the season on Thursday: 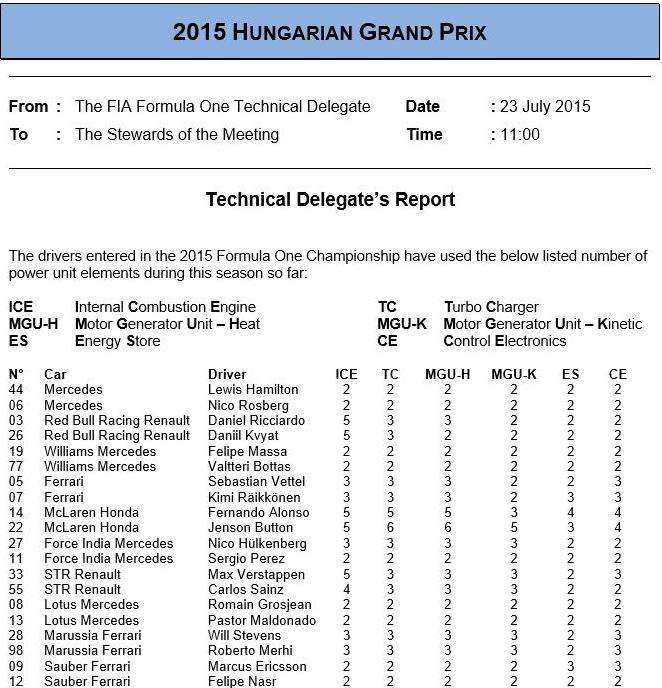 Last time out only Carlos Sainz used a fresh ICE, taking his total to four. At this point of the season, only nine of the twenty drivers are on track to get to the end of the year only using four ICE.  These are unsurprisingly mainly Mercedes powered drivers (with only Nico Hülkenberg using a third Mercedes ICE), however the two Sauber drivers have also only used a pair of ICE each.

Sainz also took a third TC at Silverstone, and was joined in this respect by the Ferrari pair.  The same nine drivers are on track to get to the end of the year within the four TC allowed.

For the Motor Generator Unit – Heat (MGU-H) it was both Ferrari drivers and both Toro Rosso drivers who used a third unit last time out.  For this PU component exactly half the field (ten drivers) have only used two MGU-H so far.  Daniil Kvyat joining the ‘usual’ nine.

Sainz was the only driver to use a new Motor Generator Unit – Kinetic (MGU-K) in Britain, this was again his third.  For this component there are thirteen drivers who have so far only used  two MGU-K.  In addition to the ‘usual’ nine drivers that have only used two of every other component, there are the Red Bull pair and the Ferrari pair.

Four drivers used an additional Energy Store (ES) last time out, both Red Bull drivers took a second ES, Kimi Räikkönen used his third while Fernando Alonso took his fourth.  Sixteen drivers are on track to get to the end of the season within the allowed limit.  Unusually Marcus Ericsson is not among those only on two ES, but his place has been taken by Nico Hülkenberg.

Both Ferrari drivers took their third Control Electronics (CE), while Jenson Button used his fourth. Twelve drivers have so far only used  two CE, once again Ericsson has used a third.  So overall for the complete PU there are only eight drivers who have only used two of each PU component.  They are dominated by Mercedes powered drivers (only Hülkenberg among the Mercedes drivers having used more than two of any component), however they are joined by Felipe Nasr.

With McLaren Honda being allowed an extra PU for the season, they would be extremely unlikely to get a penalty this race as they are choosing to use their ‘free’ additional PU, the only drivers therefore at risk would be the four Renault powered drivers if they should need a new ICE.  Max Verstappen has the oldest ICE among this quartet, having used his fifth unit for three races already.