Power Unit Use – Update before Italy

As normal for a Thursday prior to a race, the FIA have issued the technical report detailing the power unit (PU) components used by each driver so far during the 2015 season: 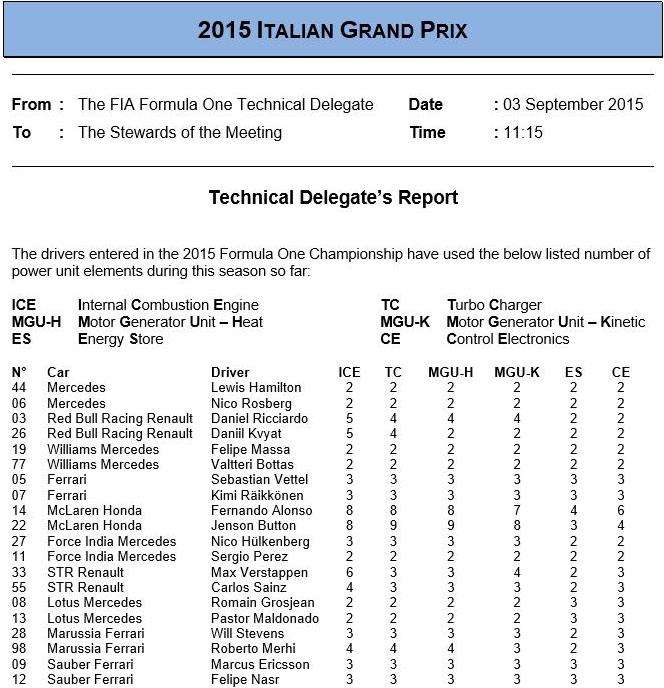 This table is dominated by the double Change carried out by both McLaren Honda’s to try and give them sufficeint components to last for the remainder of the season. This resulted in the 50 and 55 grid place penalties for the team’s two drivers at the Belgian Grand Prix. Both Fernando Alonso and Jenson Button took a new Internal Combustion Engine (ICE), Turbo Charger (TC), Motor Generator Unit – Heat (MGU-H) and Motor Generator Unit – Kinetic (MGU-K) on both the Friday and Saturday of the Spa weekend. Alonso also took a new Control Electronics (CE) over the weekend, giving him the five extra grid place penalties compared to his team mate.

The only other driver to pick up a penalty last time out was Max Verstappen for using his sixth ICE. However it was noticeable that both Sauber drivers took their third ICE, TC MGU-H and MGU-K which finally gave them the same standard of Ferrari hardware that the works drivers have been using since Spain. The other Ferrari customer (Manor), however are still on the 2014 build standard, so a generation behind what Sauber were using before.

Both Red Bull drivers took their fourth TC in Spa, so it won’t be just ICE that cause them penalties before the season’s end. Daniel Ricciardo also required his fourth MGU-H. Sebastian Vettel used his third Energy Store (ES), this component shouldn’t cause him any penalties for the remainder of the year, while both Lotus drivers too their third CE (again, this component shouldn’t cause them any penalties).

Despite the enormous penalties McLaren took last time out, Honda have indicated that both drivers will use at least one more set of components this time out (Monza being another power circuit where the team aren’t expecting to do well) so it looks like Honda aren’t planning on spending any further development tokens this season, as they are building up a store of components for the drivers to use until the end of the year. This maybe a good tactic as the series moves to some of the circuits where outright power is less important, and the team have a better chance of qualifying well, and perhaps scoring more points.

A similar approach is being taken by Renault (at least for the Red Bull team). So far they have indicated that new ICE will be fitted to both cars on Friday, whether this gets extended to include other components is not known at present (but with Honda changing so much it looks like Red Bull would only go to the ninth row of the grid, as the two McLaren’s would start from the back).   Also it may pay Toro Rosso to take a similar approach before the FIA changes the rules to close this apparent loophole. Once again, it does point to Renault not planning to spend any of its development tokens in the near future. For the manufacturer that was the instigator of allowing in-season development of the PU, it does seem odd to me that they have yet to use any of the tokens they have saved (so far it appears only Ferrari and Honda have spent any tokens).

In addition to the teams/drivers already mentioned, only Roberto Mehri is close to getting any grid penalties at this race having already used four ICE, TC and MGU-H.

Mercedes have used all seven of their development tokens ahead of this race, so both Lewis Hamilton and Nico Rosberg will use their third PU in Monza. They have also chosen to follow Ferrari’s lead with the development only available to the works team.

Red Bull have had to change more than the ICE on both cars on the Friday, so will be at the back of the grid. They have therefore decide to put another new ICE in on Saturday, to give them more components to last until the Russian GP (when Renault will finally use its development tokens). Carlos Sainz is following suit with a double engine change, while team mate Max Verstappen is only taking a single extra engine.

Ferrari has also used some development tokens ahead of this race, spending only three of its ten tokens available to improve the combustion area of the ICE. Once again this development is only available to the works team, so Sauber only had equivalent PUs for the one race. I wonder what agreement Haas has for next year?