Power Unit Use – Update before Japan

As is normal, the FIA issued their report into the number of Power Unit elements used by each driver on the Thursday before the Malaysian Grand Prix: 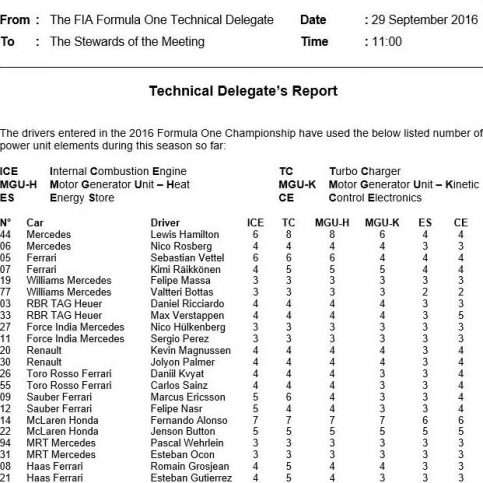 This highlights the number of drivers that have already exceeded the five power units allowed for the season, and have already taken grid penalties:

Prior to free practice one on Friday, several drivers took the opportunity of fitting new components.  The following four drivers fitted a new Internal Combustion Engine:

For Palmer and Sainz this was their fifth and final ICE, and with six races left in the season it may indicate they may have a problem before the end of the year (an even usage through the 21 race season would be for each power unit element to be used for four or five races).  For Alonso, this was a way of introducing a new engine block and taking the necessary penalties before Honda’s home Grand Prix.  The new ICE, his eighth, was only used on Friday, with an older unit fitted for the remainder of the weekend.  For Ocon, this was a late usage of his fourth ICE.  Oddly he is the only Mercedes customer to have so far unwrapped any element of his fourth Power Unit. Maybe Mercedes are giving a discount to their customers if the get through the season on only four PUs, or the customer teams are testing the reliability for next season?

The same four drivers took new Turbo Chargers, and it was the same number element for each of them.  Again Alonso removed this after Free Practice 2, and saved the new component for use in Suzuka.

For the Motor Generator Unit – Heat only three drivers fitted a new element:

For Palmer and Ocon this was again within their allowance (fifth and fourth element respectively), for Alonso it was again part of the eighth PU that was changed out after Friday.

With the other MGU, the Motor Generator Unit – Kinetic, only two drivers had new elements fitted:

As per the rest of the power unit elements, these were the fifth and fourth elements respectively, and the same comments apply.  Palmer could be in trouble come the last race of the year, while Ocon has plenty of component life left.

For Bottas this was only his third element fitted (the ES doesn’t usually have reliability issues), while for Rosberg and Sainz it was there fourth element.  None of these drivers should have penalties inflicted for over use of this power unit element.  Alonso though had his seventh ES fitted, and it contributed to his 45 place grid penalty and his stockpile of new power unit elements to last until the end of the season.

A similar situation existed for the Control Electronics, but this time Sainz did not need a ew element fitted, so Rosberg fitted his fourth, Bottas his third and Alonso his seventh.

On the Saturday, prior to Free Practice three, two drivers fitted a new TC and MGU-H.  Felipe Nasr fitted his fifth and final elements, as before this may be tight to get to the end of the season, as these components will need to last six races, while Fernando Alonso added to his pool of new components fitting his ninth of each of these elements.

With Lewis Hamilton having his terminal power unit failure in Malaysia, he will fit another of his pool of power units that he built up over the Spa weekend.  He will not need any further grid penalties this weekend, and should be able to get to the end of the season without further penalty given the three complete PU that were fitted in Belgium.  However, Mercedes are rumoured to be considering spending their remaining tokens, and if so Hamilton will suffer further penalties if he choses to use the updated components.

While Alonso has stockpiled components so that he won’t need a penalty this weekend, at some point Jenson Button will need a sixth power unit, but I don’t expect that to be at Honda’s home race.  Kimi Räikkönen is the next driver who is likely to take a grid penalty, his ICE, TC and MGU-K have been used since Monza and his MGU-K since Spa.  This should be OK for the Japanes Grand Prix, and it may be better to wait until Austin to take the penalty as overtaking maybe more straight forward there.

The Haas drivers are also likely to need new Turbo Chargers before the end of the season, their fifth elements having been used for three races already (since Italy).  Again, not likely this weekend, but possibly the team will wait until Mexico so as to not take a penalty at their home Grand Prix.

You know we live in a time where every little thing that happens is scrutinized and analyzed to the last degree. I dont think there is any rational person that can look at the above information and come up with any conclusion other than Lewis is hard on his equipment. Especially if you look at Williams numbers. Let the irrational conversations start.

Hamilton’s numbers are artificially high (like Alonso’s) as he has fitted multiple units in one weekend to avoid any further penalties. However it would appear that the works Mercedes are using their power units harder than their customers.

The Mercedes customers (other than Ocon) were due to fit their fourth power unit this weekend, but that has been delayed while Mercedes investigate Hamilton’s failure.
http://www.autosport.com/news/report.php/id/126527/mercedes-discovers-hamilton-failure-cause