On Thursday, the FIA issued their usual report into the Power Unit elements used so far this season: 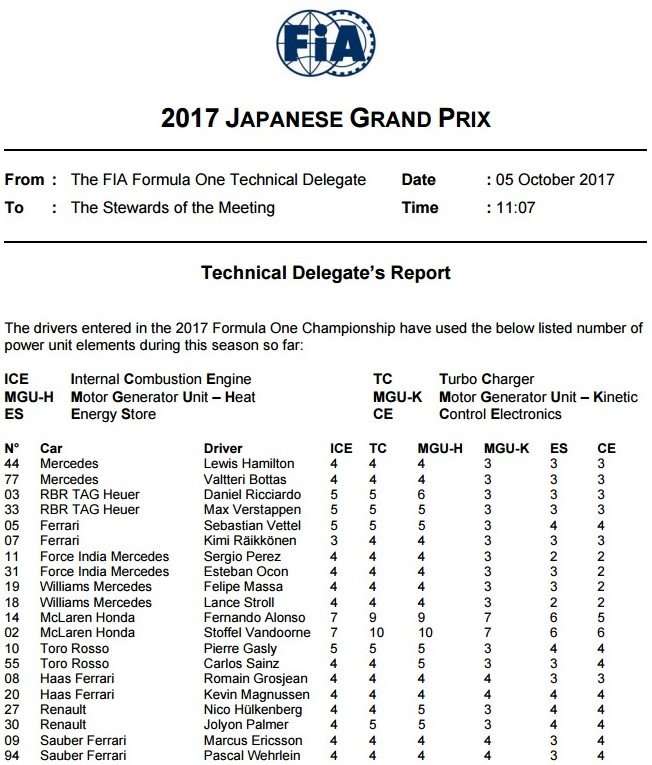 With each driver limited to only four complete Power Units for the entire 20 race season, this demonstrates how far the manufacturers need to improve reliability, especially if they are going to stand a chance of getting through next season (21 races) with the reduced number of elements, see the extract from the 2018 Sporting Regulations below:

23.3 a) Unless he drives for more than one team (see 23.3(c) below), and subject to the additions described below, each driver may use no more than 3 engines (ICE), 3 motor generator units-heat (MGU-H), 3 turbochargers (TC), 2 energy stores (ES), 2 control electronics (CE) and 2 motor generator units-kinetic (MGU-K) during a Championship season.

With the consent of (and at the sole discretion of) the FIA, the numbers above will be increased by one for any driver using a power unit provided by a new power unit manufacturer (as defined in Appendix 9) taking part in their first Championship season.

The Honda powered McLarens have been taking penalties for most of the season as they try to develop the Power Unit to a level where it is producing comparable power to the competition.  Progress is being made, as evidenced by Vandoorne’s good result last time out.  However, it is not possible to judge where they are on the reliability front currently as the team are introducing new developments to improve power output faster than the units are wearing out or breaking.  This though is also an improvement on the situation at the beginning of the season.

All the Renault powered drivers have also received grid penalties already and we are only three quarters of the way through the season.  The reliability will have to improve significantly over the next few months if McLaren aren’t going to continue to suffer grid penalties next season.  It is also possible that the current Renault drivers could suffer further penalties this season, although possibly not this weekend.

Of the Ferrari drivers, only Vettel has so far used more than the allowed four Power Units, and this didn’t add anything to his back of the grid start in the last race, so it was a wise move by the team, as both he and Räikkönen were likely to need to break into their fifth Power Unit before the end of the year anyway, thanks to losing a turbocharger each early in the season.  I still predict that at some point Räikkönen will need a fifth TC, but the other Ferrari powered drivers may get away without any grid penalties.  Taking the extra elements at the last race should however mean that Vettel can run to the end of the season without worrying about the potential grid penalties.

Mercedes are the only Power Unit manufacturer not to have suffered any grid penalties, and with the customer teams only fitting their fourth ICE, TC and MGU-H last weekend, they look in very good shape to get to the end of the year.  For the works team, the situation is less clear however.  They both fitted their fourth ICE, TC and MGU-H before the change in regulation for oil burning and so were used for the first time in Spa.  Mercedes said at the time this was for performance reasons, however in recent races it looks like Ferrari are as fast if not faster than Mercedes, so this performance step hasn’t been enough to keep them ahead.   Also if PU number four is more powerful than PU number three, then it will have to be very reliable to last from Spa through to the end of the year. If Mercedes have to fit the earlier PU for some races, it may suffer a dip in performance.  Although the team is well ahead in the constructors’ championship, Hamilton could still be caught in the drivers’ title if Ferrari stops throwing races away.

We are now in a position where the remaining grid penalties for PU use should not impact on the drivers’ title.  Also the emergence of a truly competitive Red Bull could help Vettel make up the deficit to Hamilton.  The title is far from decided, and the remaining five races could be  very close between the top six cars.

Hi Dave, Thanks for these p.u update articles, they are definitely food for thought on how the reliability of these p.u’s is developing over time. I’ve looked back at last year’s season end review, and the Mexican GP review, and it seems to me that at a similar stage of the season, the teams have used similar numbers of p.u elements this year compared to last. (Apart from hoarder Hamilton, and quick change Honda’s). Would you agree with that? And does this imply that reliability of these p.u’s has reached a plateau? I’m speculating that if that is the case,… Read more »

Sorry for the delay in replying. Last year the Mercedes customers only used four of their permitted five power units to get through the 21 race season. It is not really surprising that they are on track to get through this 20race season on four power units. What is surprising is that neither Ferrari or Renault have managed to improve to the required reliability level. However they do appear to be getting closer in terms of power output. Honda had a complete redesign this season, and have effectively started again from scratch. In this respect, they have made more progress… Read more »

Thanks Dave,
So WCC and WDC for Mercedes in 2018 again, its almost like they have a ‘baked in advantage’ ;-)
Isn’t it interesting that despite the ‘baked in’ power and reliability advantage the Mercedes p.u has, and the reliability issues that Ferrari and Renault p.u’s have, Ferrari and RBR have still made the top three in the WCC throughout the hybrid era?