With back to back races these updates are coming thick and fast.  The FIA report covering Power Unit (PU) use published Thursday is here: 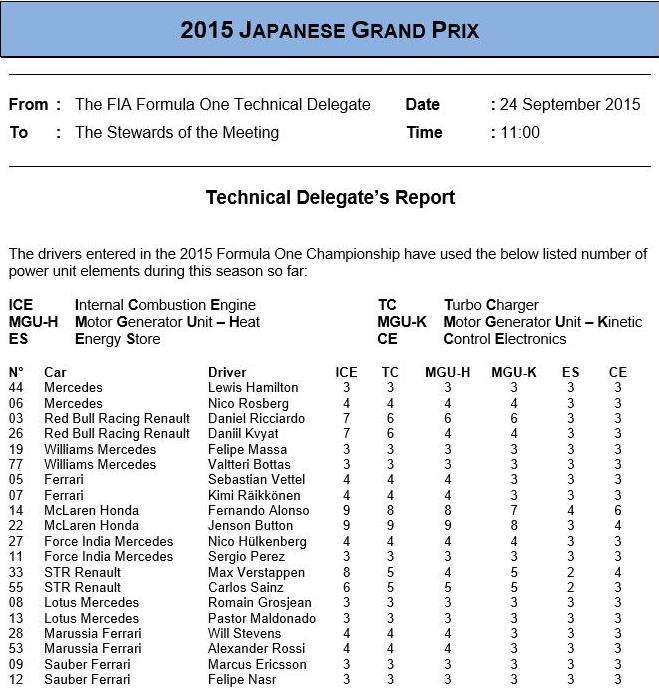 With so many additional components taken over the Spa and Monza weekends, there was very little need for drivers to take any new components in Singapore.  Both Nico’s (Rosberg and Hülkenberg) took their fourth Internal Combustion Engine (ICE), Turbo Charger (TC), Motor Generator Unit – Heat (MGU-H) and Motor Generator Unit – Kinetic (MGU-K).  In Rosberg’s case it was down to the problem found with the updated unit fitted for Free Practice 1 in Monza, where a leak in the cooling system has caused the team to decide to only use that unit during Fridays for the rest of the season.  For Hülkenberg it is probably due to his early replacement of his first PU three races before any other Mercedes powered driver.  It is likely that these two Nico’s are the only two Mercedes powered drivers likely to suffer a grid penalty this season for PU use above four components.  The Force India driver would appear to be at greater risk than the works team.

The only other new components used last time out were third Energy Store (ES) and Control Electronics (CE) for the Williams and Force India teams.  These being the final two Mercedes powered teams to use the third of these components, and easily on track to make their four available units last until the end of the season.

The only other news to emerge this week relevant to the PU use is the news from Renault that they would finally be using some of their development tokens for an upgraded specification to be introduced in Austin.  While Red Bull and Toro Rosso may  choose not to take the grid penalties to use the upgraded units, it does at least indicate that Renault are still considering developing the PU which is encouraging as far as their participation next season goes.   While these late season updates to the PU do not really help the teams and drivers this season, it does give the manufacturer greater freedom to develop the PU over the winter.  Where last winter the manufacturers had 32 tokens for development of the PU, this coming winter they will only have 25 tokens.  This represents a drop from being able to modify 48% down to 38% of the complete PU.  It therefore makes sense to use the remaining tokens during this season to give greater freedom for further development over the winter.