As the Formula 1 circus heads to Monaco for an event that has been described as like cycling in your living room, the schedule starts a day earlier than a normal race weekend.  This is a result of there being no running on the Friday.  As a result, the FIA report into the Power Unit elements used so far is published on the Wednesday: 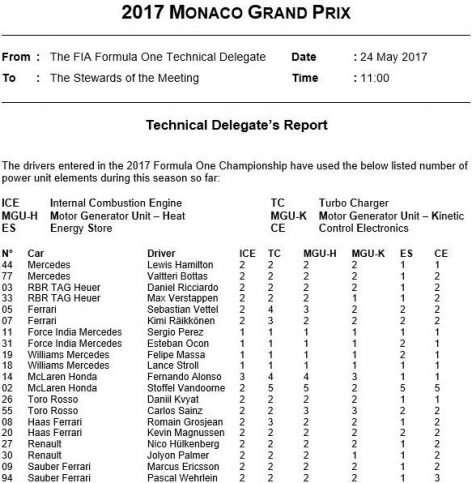 Each driver (or their replacement in the case of Fernando Alonso /Jenson Button this weekend) has four complete Power Units to last for the entire twenty race season.  Each Power Unit (PU) consists of six elements:

Should a driver require to use more than the four permitted PU through the season (as has already happened to Stoffel Vandoorne), then they will receive a starting grid penalty.  Ten places for the first time an element is used from the fifth or subsequent PU, and five places for each time a subsequent element is used from that PU. So Vandoorne received a fifteen place grid penalty in Sochi for using his fifth TC and MGU-H, while he received a ten place penalty in Barcelona for using his fifth ES and CE.

Monaco is the sixth race of the season, and if teams were looking to divide the mileage evenly between the four available power units, then this should be the race where they introduced the second PU.  However looking at the report above, it is clear that only the two Mercedes customer teams have that as an option, and even then Esteban Ocon and Felipe Massa have used 2 ES so far.  Other teams may have chosen to introduce their second PU early (or elements of it) and use the older first PU for running in the Free Practice sessions of the Friday (Thursday at Monaco).  With the time between Free Practice 3 and Qualifying so short at only two hours, it is difficult for a team to change only one power unit element in this time, it is quicker to remove the complete sub-assembly of ICE, TC, MGU-H and MGU-K and swap it for another pre-built sub-assembly.  While on some occasions there may be no actual damage to the replaced components, it just may be the quickest way to cure a fluid leak before qualifying starts, there are occasions where one or more element has suffered damage which would prevent it being used again.  Understandably the teams are very reluctant to share the data on precisely what has failed, so we are left with the report as published.

The FIA does publish further documents through the race weekend, and these detail whenever a new element has been used by a driver.  These reports for Monaco will be published on this page, under the technical reports section.  If a team intends to use any new power unit element for the first time they must inform the FIA, who will attach a seal to ensure that no significant moving parts can be repaired or replaced.  The element will be deemed to have been used after the car’s timing transponder has left the pit-lane.  If any new elements are used, the report will be issued once the affected cars have left the pit-lane for the first time in that session.

With unlimited development of the PU allowed this season, it is an advantage for teams to time these updates with the introduction of the new PU.  Mercedes were stated to have made a reliability update in advance of the Spanish Grand Prix, and as a result both of the works cars had their second ICE, TC, MGU-H and MGU-K fitted for first practice.  Unfortunately a leak detected in Valtteri Bottas’ car meant that this was swapped back to his original elements on Saturday.  The PU then failed in the race giving him a DNF.  Is this an indication that Mercedes are being pushed so hard by Ferrari that they are running their PU harder than they have done in the past?  Certainly the customer teams (who do not appear to have the big gains made by the works outfit for qualifying) have yet to suffer any reliability issues, but failures are very rare for the Mercedes team.

Ferrari as the closest challenger is currently as fast or faster than the Mercedes depending on the circuit.  Even if they do not yet get the same boos in qualifying as Mercedes, they are certainly able to perform at a close level in the races.  However, they have used significantly more PU elements to achieve this.  While it is possible (although unlikely) that all these have been precautionary changes and all the elements are available for their full mileage during the rest of the season, what it does mean is that Ferrari are more restricted in terms of the number of updated elements they can introduce for the rest of the year without incurring any grid penalties.  Sebastian Vettel has for example used all four of his allowed TC, so if Ferrari make either a performance or reliability improvement to that component, Vettel cannot make use of it unless he takes a grid penalty.  The fact that he has needed to use four TC after only five races does in itself indicate that at least one if not two of them has suffered damage such that it cannot be trusted to complete a race distance.

Renault may not have the same number of elements used as Ferrari, but they and their customers introduced their second ICE, TC and MGU-H back in Russia (some two races early).  Now either these were updated components that offered the teams some performance or reliability advantage, or there are some significant reliability issues with the current design.  Alternatively, the long straights in Sochi may have been enough to prompt the fitting of new elements to the cars as both the customer Ferrari teams did the same.  Renault has recently announced that they have delayed the introduction of their updated power unit, so I am concerned about Renault’s ability to get to the end of the year without penalties.

Honda is the only manufacturer to have taken any penalties so far this season, and with their record so far it does look extremely likely that one or both of their drivers will suffer the same fate in Monaco.  If Jenson Button does get through the weekend without a penalty it just makes it more likely that Fernando Alonso will be welcomed back to F1 with a lowly start position in Canada.  I am not expecting anyone else to suffer grid penalties this weekend, but it would be a surprise if one of the McLaren’s didn’t start from the back (and not just because they are slow).

The use of the elements is detailed in the FIA technical reports (doc9 & doc12) published on the website linked in the article.

The Mercedes customer teams are the only cars left using their original ICE, TC, MGU-H and MGU-K.

FIA document gives/lists “new” components used. As for which ones are used in different seasons, that information can only be gathered from the teams themselves. Once an element has been used once, it can be used anytime and the change is not published by the FIA. Only new elements get published in FIA documents. An example to clarify things:> Before FP2 Mercedes number 44 took 2nd ES and 2nd CE. The FIA document had been triggered once the car got passed the timing transponder at end of pit exit, which means that 2nd ES and 2nd CE elements has been… Read more »

Jenson Button has actually added one more TC and one more MGUH to the four Alonso have used.