With everything in Monaco starting a day early, the FIA have today published their report into the Power Unit (PU) elements used by drivers so far this year. 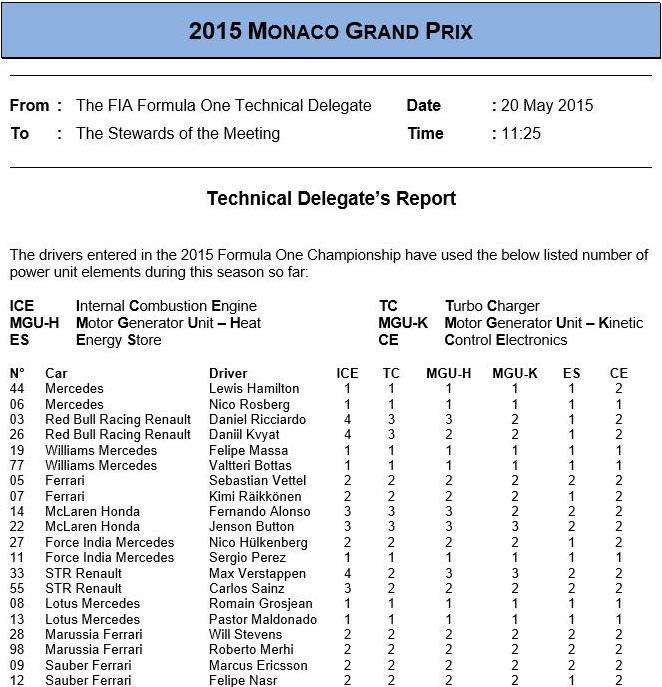 With each driver only allowed four complete PUs for the season, several drivers have already use a significant number of these components with three of the four Renault powered drivers already using four Internal Combustion Engines (ICE).  Carlos Sainz is the only Renault user to have used fewer than four ICE, but even he used his third unit last time out in Spain.  The McLaren pair are the next highest users of ICE, with both using their third Honda ICE last time out, this is just as worrying as they have completed so few miles, the distance they are getting from each unit is similar to that of Renault.  The only other drivers to use a new ICE in Spain were the two Sauber drivers, who used their second Ferrari unit for the first time.  All Ferrari powered drivers have now used two ICE, with only the Force India of Hülkenberg having a second Mercedes ICE.  With Monaco being the sixth race of the 19 race season, it is the right tie for the remaining Mercedes powered drivers to unwrap their second ICE.  However as Monaco isn’t particularly stressful for the PU, some may choose to wait until the higher speeds of Canada if reliability is not considered a problem.

Only six drivers used a new Turbo Charger (TC) in Spain.  Both Red Bulls took their third Renault unit (joining the Honda drivers who have been using their third TC since China.  While the four Ferrari 2015 powered drivers (Ferrari and Sauber) used their second TC last time out.  Once again it is only Hülkenberg of the Mercedes powered drivers who has used a second TC.

Even fewer drivers took a new Motor Generator Unit – Heat (MGU-H) in Spain, with fiver drivers needing a new unit.  Ricciardo took a third Renault item (joining the Honda pair and Verstappen on three units used to date).  While once again the users of this year’s Ferrari PU took their second MGU-H, to leave only the seven Mercedes powered drivers (excluding Hülkenberg) who have only used one MGU-H.

Both Toro Rosso drivers needed an extra Motor Generator Unit – Kinetic (MGU-K), Verstappen taking his third while Sainz used his second.  Honda powered Button also used his third MGU-K, putting him level with Verstappen as the only two drivers to have used three MGU-Ks.   Once again the users of the current generation of Ferrari PU got their second unit last time out.

The Energy Store (ES) has proven to be the most reliable component of this new breed of PU since its introduction in 2014.  Four Ferrari powered drivers were the only ones needing a new ES in Spain (Vettel, Stevens, Merhi and Ericsson) each using the second of their four allowed.

The Control Electronics (CE) appear to be much more reliable this season compared to last, with only the 2015 Ferrari drivers needing to use a new CE last time out.  This time it is only six Mercedes drivers (excluding Hamilton and Hülkenberg) who are on their original CE.

As discussed above, mathematically this would be the ideal time in the season to introduce the second PU, and therefore it is just possible that we may see the first of the manufacturers PU upgrade tokens being used here.  However as Monaco has such a small percentage of the lap at full throttle, it may be that Mercedes wait until Canada before introducing their updated PU.  As for the other manufacturers, they have already used their second, third or even fourth units, so it is not clear when they will choose to use their tokens.

Grid penalties are a real possibility from this race onward, particularly for the Renault powered drivers, but Honda aren’t that far behind.  The penalties are a ten grid place drop for the first time a fifth component is used, and five places for the each subsequent fifth component is used.  If these penalties cannot be applied to the driver’s starting position (and a complete PU with six components would lead to 35 places dropped), then time penalties would be added to the driver’s pit stops linked to the number of grid penalties untaken.   Races could start to get more complicated to follow rom this point in the season.

So in summary, it’s a comprehensive beatdown from Mercedes.

It will become more apparent as the season progresses. Williams have to be the best hope for a long term championship challenge, as Ferrari will suffer too many grid penalties.

Thanks for the update Dave. I think Shaolin is about right, if your p.u components vome with a silver star on them, you’re going to have a great season.
Am I right in thinking that the development tokens can only be applied to components that haven’t been used?

That’s certainly the way I read the regulations. Each PU component is sealed by the FIA to prevent them being rebuilt, so I don’t see how the could be changed in design. That is why I would expect Mercedes to start spending their tokens now (before most of their drivers use the second components.

Andrea is right then, poor renault (and Honda)
Can they trade the redundant tokens for something useful? A Bernie E effigy, or some 2014 Mercedes parts?