Power Unit Use – Update before Russia

Very few new Power Unit components were used in Japan, the list of those components used so far was published by the FIA on Thursday: 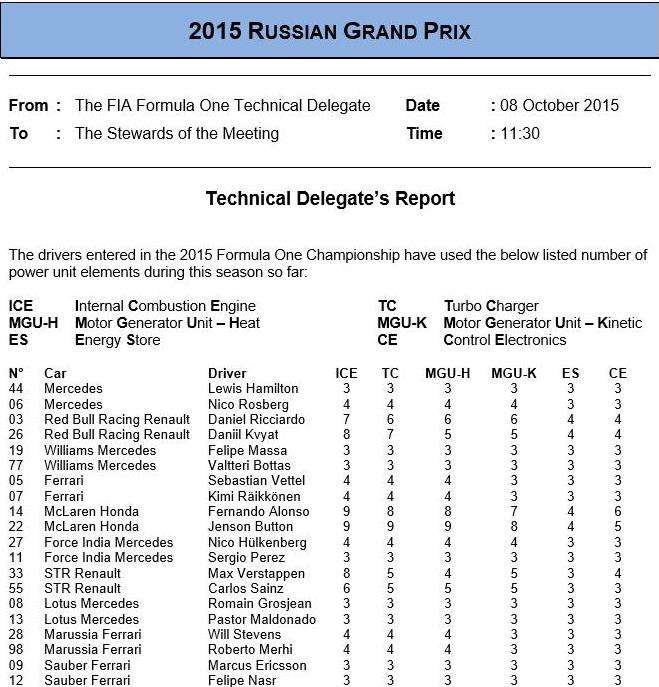 Daniil Kvyatt needed a complete new Power Unit (ICE, TC, MGU-H, MGU-K, ES and CE).  No one else needed anything other than replacement Energy Stores or Control Electronics.  New ES was taken by both Red Bulls, both Toro Rossos and Jenson Button’s McLaren.  Both Red Bulls and Button took a new CE.  No-one else needed any new components.

While Mercedes have used all their in-season development tokens, none of their customers will have the latest specification of PU when they but in their fourth (and hopefully final) unit for this weekend (hat tip Autosport).  This should maintain the works team’s advantage over their customers.  Only the pair of Nico’s (Rosberg and Hülkenberg) have used their fourth ICE, TC, MGU-H and MGU-K already, neither are planning to fit a fresh unit this time out.

Honda had four in-season development tokens left, and according to Autosport, have used all four tokens to try and improve their power deficit. Unfortunately they haven’t had time to manufacture two updated PUs, so only Fernando Alonso gets an updated specification this time out (as his existing PU had a higher mileage).  Button will have to wait until Austin to get his update.  This makes Alonso’s tenth ICE, just how many will Honda need to get to the end of the year (noting that the regulations call for only four to last the season).

Ferrari have ten in-season development tokens but with the works drivers already on their fourth PU, there are no plans to introduce a new specification unit this weekend as that would send the drivers backwards on the starting grid.  Before the end of the season they are likely to need a fifth unit.  At that point it is likely that the works drivers could get another upgrade, if nothing else this would make sense to help the winter development.

Renault, the manufacturer who insisted that in-season development be allowed this year, have yet to use any of their in-season tokens.  As a result they have twelve tokens left, and may use some in advance of the next race in Austin.  Daniel Ricciardo is not to impressed by the thought according to Autosport, so again this may just be preparation for real development over the winter. The Renault drivers not that far behind the Honda drivers in terms of the number of ICE used, with two on their eighth unit.

So Alonso is going to have to start from the back again this race in the hope that the additional power will help him make up some places.  It may be interesting to compare the two McLaren’s lap time if they both get untroubled runs this weekend.

I thought it was Ferrari that was the driver behind the in season development? Or were they only the ones that spotted it?

From memory, it was Red Bull and Renault that were pushing for it, Ferrari certainly supported the proposal.

I wonder what Renault are planning to do with their development tokens? They can’t carry them over to next season (which will be back on the planned schedule of “you run what you brought to the homologation date”), so any development they’d want to use them to introduce would need to be done during this season. Or can they use this year’s leftover tokens during the winter break, along with the tokens to be used in preparation for 2016? If the rules didn’t have a fixed homologation date for 2015 (which led to the in-season developments we’ve seen this season),… Read more »

Red Bull would have to pay $500 Million if they left at the end of this season, this figure decreases at $100 million a year until 2020.

It is an interesting point about when the season finally closes, could they just introduce a new specification for the young driver test at Abu Dhabi? In that way none of the drivers have to take start penalties for the use of yet another power unit.

You have to assume that IF they get Renault back on board, they’ll pay more for that new relationship. :)