Power Unit Use – Update before Singapore

The FIA produced report prior to the Italian Grand Prix at Monza highlighted all the power unit elements that both Lewis Hamilton and Fernado Alonso had taken at the previous event in Spa: 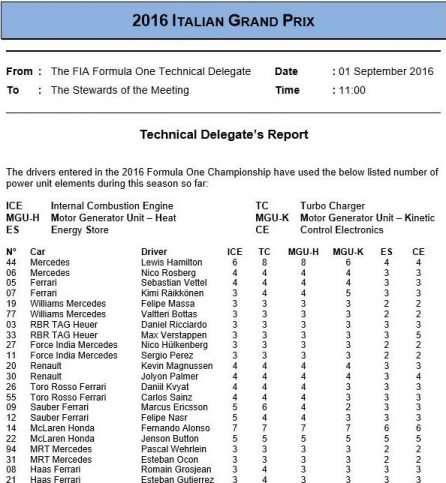 It is these two drivers and Marcus Ericsson who suffered grid penalties in Belgium for exceeding the maximum allowed five complete power units for the season.  With Monza being the fourteenth race of the twenty one race season, it was this race or the previous event in Spa that would be the planned race to install the fourth power unit (if the drivers were to use each unit for an even number of miles through the season).

For Vettel it was his fifth and final component (having needed an additional unit way back in Russia) so he is likely to need to take a grid penalty before the end of the season.  For the others it was their fourth ICE, and so they are on track to get to the end of the year penalty free.  Before Free Practice three on the Saturday Daniel Ricciardo also took his fourth ICE, ensuring that it was a few miles fresher for qualifying and the race.

Noticeable are the number of drivers who have yet to use their fourth ICE:

As these are all the Mercedes customer teams, I wonder if the delay in them fitting the fourth unit is for Mercedes to build sufficient engines with the latest upgrade (which the works team used in Belgium)?  While the usage of power units from the Mercedes customers looks odd, most did fit their third ICE as recently as the German Grand Prix, so they have only done three races.  Ocon is the odd man out, with his third ICE being fitted way back in Austria (when Haryanto was in the car) and it has been used for six events.  These teams could have a strong end to the season, as they should be able to turn the power units up in qualifying as each unit has to last fewer miles than their competitors.  However Williams and Force India are battling each other for fourth place.  Manor however, may be able to build on their improving qualifying performance, and score some more points.

Turbocharger – TC  The same drivers fitted a new TC as fitted a new ICE, and at the same time (Ricciardo waiting until Saturday morning).  However for all the Ferrari powered cars changing (Haas and Ferrari) it was their fifth and final TC, so they are all likely to need to take grid penalties before the end of the year.  Ricciardo fitted his fourth TC, and is on track to get to the end of the year penalty free.  His team-mate, Max Verstappen, joins the Mercedes customer drivers in only having used three TC so far.  This may be crucial in who comes second in the constructors championship as Ferrari battle Red Bull over the next seven races.

Motor Generator Unit (Heat) – MGU(H)  Once again it was the same five drivers fitting a new MGU(H) at the same times as the previous two power unit elements.  This time around it is the two Ferrari drivers who fitted their fifth MGU(H, while the Haas drivers and Ricciardo needed their fourth.  Yet more penalties in store for the Ferraris before the end of the year, while at the other end of the scale Verstappen joins the six customer Mercedes drivers in only having used three of this element.  This further strengthens Red Bull’s ability to hold onto second place in the constructors’ championship.

Motor Generator Unit (Kinetic) – MGU(K)  This MGU would appear to be under less stress than the one attached to the turbocharger.  Only three drivers fitted a new MGU(K) in Italy:

With Ricciardo again waiting until Saturday morning before fitting his.  For Ericsson it was only his third MGU(K), while for the other two it was their fourth.  In addition to the customer Mercedes drivers, all the customer Ferrari drivers bar Grosjean are only on their third MGU(K).  However both Kimi Räikkönen and Jenson Button fitted their fifth component in Belgium and so are likely to need a grid penalty worthy sixth MGU(K) before the end of the year.

For the Ferrari pair this was their fourth unit, which means this power unit element shouldn’t cause them any concern for the remainder of the year, while for the two customer Mercedes drivers, it was only their third ES.  In fact only the two McLaren Honda drivers are in trouble with this component.  Fernando Alonso has already taken a penalty fitting his fifth and sixth ES in Belgium, while Button fitted his fifth.  While most manufacturers have managed to get these components to last for the season without issue (four of the customer Mercedes drivers have only used two so far all season), perhaps Honda has an issue to resolve with their ES and this may cause further penalties.

Like the ES, this power unit element rarely causes issues, for the Ferrari pair and Magnussen this was their fourth CE, while for the Mercedes powered pair it was only their third.  Both McLaren Honda’s are in potential trouble with this element having fitted their fifth (and in Alonso’s case sixth) CE in Belgium.  However Max Verstappen may also suffer as he first fitted his fifth CE all the way back in Baku at the European Gran Prix (some seven races ago) and with seven more race until the end of the year, it may be hoping too much for the component to last.  Singapore may but the Control Electronics under more strain than other circuits, a number of cars have had issues in previous races when they have driven close to the local tram system, and the high transient currents through the rails have caused problems with the cars electronics.  Mark Webber in particular suffered for a couple of years (not every lap, but once or twice during the race weekend the car cut out at a particular point on the circuit).

I don’t think Singapore will be the place where any manufacturers introduce an updated power unit (for those that have tokens left) as it isn’t a particularly power hungry circuit.  However at some point the customer Mercedes teams will use their fourth power unit, and that should give them an improvement compared to their rivals, and it may well be this weekend that the upgraded units are available.

I really look forward to these informative posts – thanks MIE :)

You’re welcome. Despite Renault spending three tokens on improving their power unit, the updates are to parts that do not need any new PU elements fitted. No one had any new elements fitted for Friday practice (at least there is no FIA report).
http://www.autosport.com/news/report.php/id/126222/all-renault-drivers-will-now-get-upgrade