Power Unit Use – Update before Sochi

Despite the cars only covering at most a couple of thousand kilometres in the season so far (Valtteri Bottas has driven the furthest in practice, qualifying and the race at 2070 km, while Stoffel Vandoorne brings up the rear with only 1202 km covered), many of the power unit elements have needed to be replaced.  So after only three race weekends only seven of the twenty drivers are using their original power unit.  Bearing in mind that for this season, each power unit needs to last for five race weekends, this is a bad state of affairs and most of the grid could be in line for grid penalties before the end of the year.  Those drivers currently using their original power unit are:

The most noticeable thing about this list is that five of the seven are using the Mercedes power unit (only Valtteri Bottas has had to change a power unit element, his Control Electronics), and that of the two others, the Ferrari used by Marcus Ericsson is last year’s model.  Jolyon Palmer is therefore the only non-Mercedes driver using a 2017 power unit who has not had to change a power unit element early, but then he has had one early retirement from the opening race and has so far only completed 1450 km.

Last time out in Bahrain, new power unit elements were being fitted before every free practice session and prior to the race. Only the gap between Free Practice 3 and Qualifying went without a team having to change an element of a power unit.  Before Free Practice 1 five drivers took new components:

The list before Free Practice 2 was smaller, with only three drivers affected:

Prior to the race, two drivers needed new parts after issues in qualifying:

With McLaren stating that both their drivers will fit a new MGU-H this weekend to try and fix their ongoing reliability issues, it means that Stoffel Vandoorne will be using his fourth element already.  Any requirement for another MGU-H at any point after this will mean a grid penalty.  Other drivers getting close to penalties already are:

The FIA technical report confirming the power unit elements used to date is reproduced below. 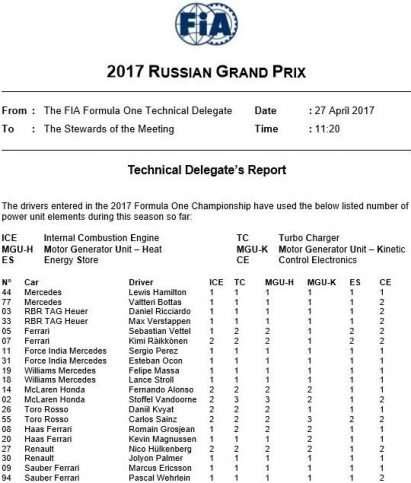 It is being said that Renault are now satisfied with their reliability fix to their 2017 MGU-K and will be using it in Sochi, Renault was trailing their reliability fix in Bahrain, Renault hit trouble with their 2017 unit during winter testing and all Renault engine cars had to revert back to using their 2016 unit. Renault claims the 2017 unit is 5kg lighter than their 2016 unit, which means the old one was at least 12kg,that is because in 2017 there is a minimum MGU-K weight of 7kg.

The old MGU-K also requires an air bottle for cooling (a further couple of kilos) according to AUTOSPORT.

The additional bottle of compressed air for cooling needed (at least on the 2016 Renault MGU-K) adds another 1kg.
Formula one power units do use air filters (air cleaners).

And Vandoorne kicks of the power unit components penalty race with a 15 grid drop penalty, not that it will effect him much.

Last place then. Although just starting the race would be an improvement at this stage.

Vandoorne had a suspected MGU-K failure in FP1. There is insufficient time between the sessions to change just that MGU, so McLaren are swapping the complete ICE, TC, MGU-H & MGU-K. That will be his fifth TC and MGU-H, so grid penalties already in only the fourth race of the season!

The above was from an AUTOSPORT report. The official FIA report only states a new TC and MGU-H, presumably the ICE and MGU-K were used in earlier events.

Vandoorne fitted a new ES and CE before FP3, while Palmer took a new CE.

The failure that Palmer suffered in FP3, which Channel 4 were reporting as requiring a new Power Unit, has not been reported as such by the FIA. Perhaps the team registered the ICE, TC and MGU-H that they changed at the beginning of the weekend?

Still no sign of the reported 2017 specification MGU-K for the Renault Power Units. Perhaps they are waiting until the sixth race before fitting them?