Power Unit Use – Update before Spain

With rumours now circulating that Mercedes may veto any increase in the number of Power Units (PU) at the next F1 strategy group later this month(see Grand Prix Times), some drivers are getting very close to gaining an unwanted grid penalty already. The FIA’s technical report into the Power Unit Elements used so far is below: 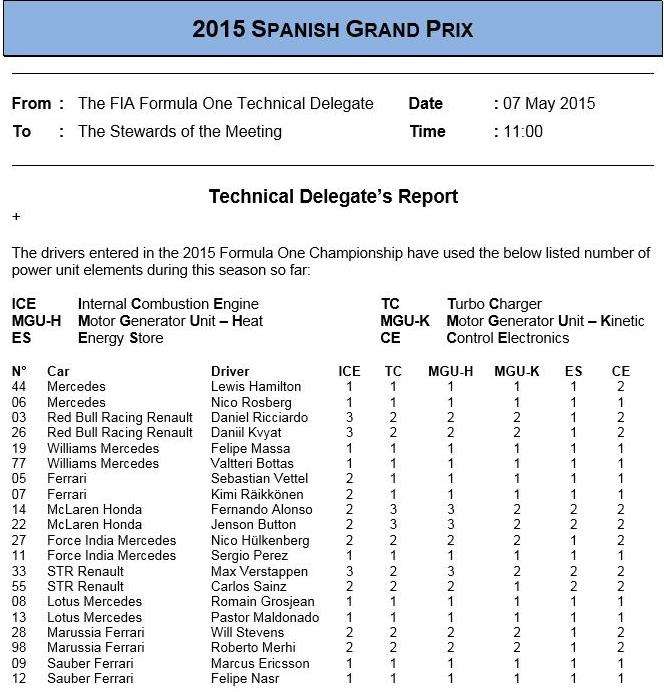 All bar one (Carlos Sainz) of the Renault powered drivers have already used their third Internal Combustion Engine (ICE), and with Daniel Ricciardo’s spectacular explosive end to the Bahrain Grand Prix it is highly likely he will use his fourth and final ICE this weekend.   Ferrari powered drivers are in a slightly better position than the Renault powered ones, but even then only the Sauber team are still on their first ICE (the works team took their second unit last time out, and the Manor drivers used theirs a race earlier in China). If the goal is to remain at four units for the year, then really teams should wait until the next race before changing them. Of the Mercedes powered teams, so far only Hülkenberg has needed a second ICE which he used for the first time in Bahrain. The two Honda powered drivers are slightly worse off than the Ferrari drivers, but slightly better than those powered by Renault, in that they first used their second ICE in China.

When it comes to the Turbo Charger (TC), it is the Honda powered pair that are worse off, having used their third TC for the first time in China. The Renault drivers come next, with all of them having used two TC so far, Kvyat only taking his last time out. Of the Ferrari powered drivers, only the Manor drivers have needed two TC, using theirs for the first time in China, while once again Hülkenberg is the only Mercedes powered driver to use more than one component.

For the Motor Generator Unit – Heat (MGU-H) it is a similar story, with the Honda powered McLaren pair on three components used, with the Renault powered Verstappen joining them last time out. The rest of the Renault drivers are on two units used along with only the Manor driver powered by Ferrari and Hülkenberg once again as the sole Mercedes representative.

It is a slightly better position for the Motor Generator Unit – Kinetic (MGU-K) with no driver yet having to use a third unit. However the Honda pair and three out of the four Renault drivers have used two, along with Manor from the Ferrari Powered teams and Hülkenberg for the Mercedes Powered drivers. Sainz is again the better of the Renault powered drivers, and this despite him completing the furthest distance of any of the drivers (3,006km), which is 52km further than the next driver (Hamilton).

Again this season the Energy Store (ES) is proving to be the most reliable of all the PU components. Only four drivers have needed to use their second unit, the two powered by Honda and the Toro Rosso pair with Renault power. Everyone else has remained on their first ES which they will need to for the coming weekend if they are to remain on track to be penalty free until the end of the year.

The Control Electronics (CE) may just prove to be a chink in Mercedes reliability, with not only Hülkenberg but Hamilton using two CE to date. Following a similar trend to other components, all Honda and Renault drivers are also on their second CE, joining the Manor team as the only Ferrari representative to have used two.

As mentioned above, the driver who has travelled the furthest distance so far is Carlos Sainz. The table below show the distances completed up until the end of the Bahrain Grand Prix. These include the free practice sessions for test drivers that are using the same PU allocation, and Kevin Magnussen’s limited Milage in Australia that counts against Alonso’s distance. 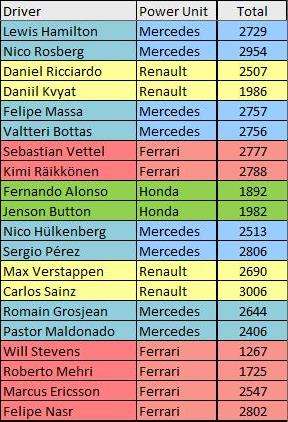 Unsurprisingly the shortest distance has been covered by the Manor drivers who didn’t run at all in Australia, with the McLaren drivers only having managed a couple of hundred kilometres further. Despite the Renault reliability issues, the Toro Rosso pair have put in the laps to try and learn the tracks, which is useful for them as novice drivers at this level. This could also explain why Nasr has driven further than Ericsson at Sauber. Other differences in distance covered by team mates can be explained by reliability issues (or incident/accident) that have limited an individual’s running. What is apparent already is that the Mercedes or Ferrari powered drivers do not seem to be limiting their driver’s mileage to preserve reliability. For Renault and Honda it seem to be the reliability that is limiting the distance covered rather than a conscious attempt by the teams to limit distance.

To sum up, if Ricciardo has another poor weekend with a failure in free practice, then he could be facing a start penalty in only the fifth race of the season. This could be particularly painful if the strategy group votes to allow five PUs for the season later in the month. However if the rumour is correct and Mercedes blocks that proposal, it is likely that both Renault and Honda powered drivers will suffer penalties first.

This is so disappointing this will have such a huge impact on a good portion of the grid.

So would Renault be on the hook for causing such a huge loss in potential point gains? To me it seems like if a vendor caused this much trouble in any other business they’d be sued.

Is limiting power units per driver one of the most effective means of cost control, or should cost control come at the R & D level?

The intent is to improve reliability, and for Mercedes and Ferrari it seems to be happening. Don’t forget that before the number of engines were limited by the regulations each driver was using several engines per race weekend (a new unit for each session). It wasn’t as if the manufacturers could benefit from large production runs either, as development was unlimited, and different engines were produced just for qualifying (as they wouldn’t last the race). One of the benefits of this change is that most cars now finish the races to the extent that points now have to go down… Read more »