Power Unit Use – update before the final race

The Power Units used so far in the season are shown in the FIA report issued today: 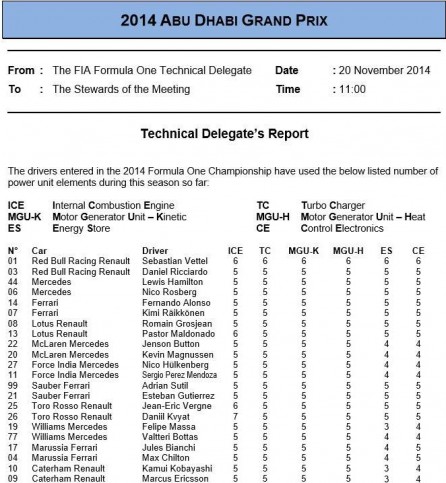 As we get towrds the end of the season, unsurprisingly most drivers have used all the toys available to them in the box. No-one used a new ICE, TC, MGU-K or MGU-H in Brazil. A few drivers finally unwrapped theirfifth and final ES (Hamilton, Rosberg, Grosjean, Gutiérrez and Kvyat), while the same drivers took their final CE (except Gutiérrez who used his fifth way back in Spa). As a result, no-one took a penalty, although we did see some drivers suffering failures in Brazil though having to use units that were near the end of their life (Alonso in practice and Grosjean in the race). 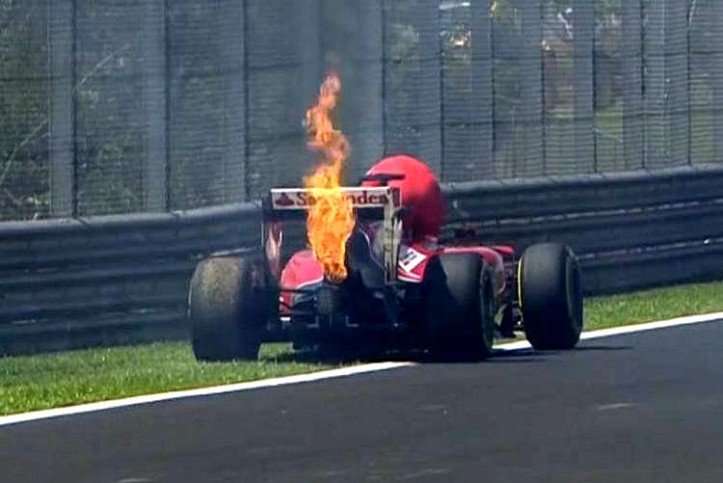 The perhaps unintended consequence of double points at the race in Abu Dhabi was that a number of drivers were forced to use down on power high mileage Power Units at the circuit were this performance drop off would be most keenly felt. Interlagos being the highest altitude circuit that is currently used in F1, so one where the turbo has to work harder than anywhere else. This also helps to explain why pole this year was a record for the circuit (faster even than the 3 litre unrestricted V10’s used in 2004), while at most circuits this generation of cars have struggled to come close to last season’s times (with rev restricted 2.4 litre V8’s). Yes the new track surface undoubtedly helped, buut the current generation turbocharged engines will be able to maintaine their power output at this altitude far better than the previous generations of normally aspirated engines.

No one should have to take a penalty this weekend, as the impact of the grid penalty will be much higher here than at other races due to the introdution of double points for this event. However it is just possibe that the customer Mercedes teams (McLaren, Force India and Williams) may use their fifth and final ES and CE this weekend although why they would wait until the last race is a mystery. In Filipe Massa’s case he has only used three ES through the year, so he would need to be really determined to use them all.

Caterham are also in the position of having ES and CE to spare (having only used three ES and four CE so far). In their case they may be able to negotiate a discount from Renault if they do not have to use all the avaiable components through the season. Although to be honest these willl have been manufactured already, and are likely to be changed for next season, so such a discount may not be possible.

Looking ahead to next season, when each driver will only have four Power Units to complete the twenty race series, this means that each PU component will need to last between 2500 and 3000km (based on the distances drivers have completed this season over the race weekends so far). If the drivers do not use any more ICE in Abu Dhabi, and complete this weekend with their average distance, then the table showing the avergae distance for each of their ICE is as follow: 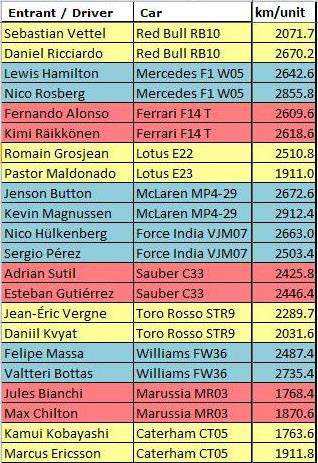 From this it looks like the Mercedes powered teams should be OK as all their drivers have made their units last over 2480km, with Magnussen getting an average of over 2900km. The Ferrari works team look to be on track with 2600km per unit, while the Sauber team averaged 200km per unit shorter (thismay just be a reflection of how far they progressed through qualifying).   Renault though really have some reliability improvements to make, with onlly two of their drivers (Ricciardo and Grosjean) manageing to get the units to last the distance that will be required next season. All the other Renault powered drivers have had to take an additional unit, and so their mileage per unit is so much less. Interestingly Kvyat managed to make each of his seven ICE go further than Maldonado’s six units, it just shows what an incident prone season the Lotus driver has had.

Honda will have their work cut out over the winter to not only equal the power produced by all of these PU’s (once they have had the modifications permitted over the winter) but also in getting the reliability which has had such an effect in the last third of the season.

Previous article
Bianchi out of coma; moved to French hospital
Next article
Caterham Crowdfund gives Will Stevens a chance