Power Unit Use – Update prior to Austria

With Canada being much harder on the Power Units (PU) than the previous race in Monaco, we saw many new components being used for this race. With only four PU to last the nineteen race season, each PU should last five races, so logically the second PU should be put in for race six (Monaco). However with Monaco putting a relatively low demand on the PU, the new units were saved for the seventh race (Canada). The FIA published list, showing the PU components used to date is: 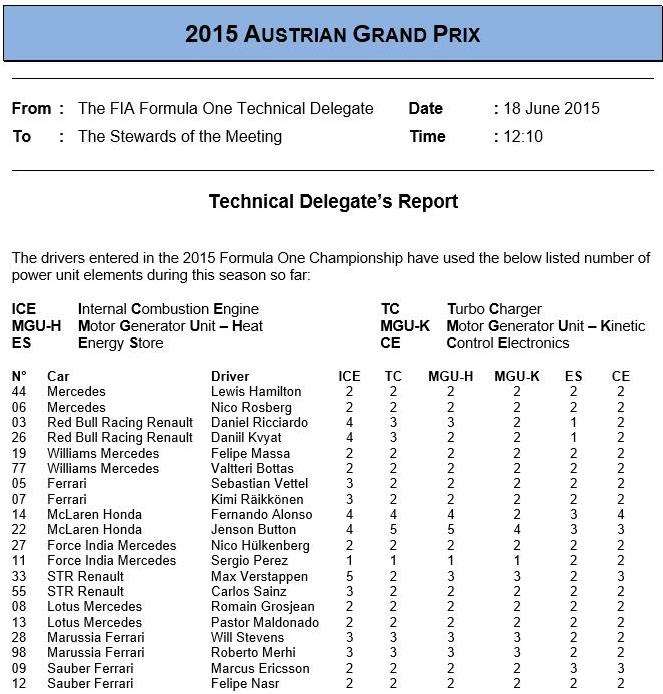 Virtually every driver used a fresh Internal Combustion Engine (ICE) for the Canadian race, with only the Renault powered drivers, Force India and Sauber trying to last without a fresh unit. Of these Max Verstappen failed, and needed to take new ICE, taking his total to five and contributed to his grid / drive through penalty. While most driver’s decision can be explained because they have already used their second (or third or even fourth) ICE before the ideal point in the season, Sergio Pérez is still on his first ICE. Perhaps this is indicative of Force India’s financial troubles, and they are trying to save cash by not using PU components? Sauber also look like they are trying to save money, as Ferrari spent three PU development tokens improving their ICE, but Sauber didn’t use the improved unit.

For the Turbo Charger (TC), three of the Mercedes powered teams (once again excluding Force India) used their second TC for the Canadian race. For Force India, Nico Hülkenberg had already used his second unit, but once again Sergio Pérez remained on his first TC (they only driver in the field to do so). Manor used their third TC in both cars (the second unit having been used since China), so they are likely to get a penalty for a fifth TC used before the end of the year. Both McLaren’s use a fresh (fourth) TC (Honda spent two PU development tokens which could have been used for the TC), however the catastrophic failure of Jenson Button’s car in FP3 meant that he needed a fifth TC which contributed to his drive through penalty. Both McLaren drivers are likely to receive further penalties for additional TC use before the season finishes.

There was an identical situation for the Motor Generator Unit – Heat (MGU-H), with the same outcome for Jenson Button. Honda’s two PU tokens could also have been sent in re-designing this component.

For the other MGU, the Kinetic one (MGU-K) again it was three of the Mercedes teams and Manor that planned to fit new components. Once again Button needed a fresh item following his issue on FP3. this time only using his fourth component.

For the Energy Store (ES), it was just the four Mercedes powered teams who used their second component, a planned change that even Force India were prepared to make.

With the Control Electronics, the Mercedes powered team used the second unit where they hadn’t already used it, so all bar Lewis Hamilton and Nico Hülkenberg got a fresh CE. Other changes (probably unplanned) were for Fernando Alonso and Max Verstappen.

For this coming race Fernando Alonso is the man most likely to get a penalty followed by the Red Bull pair (embarrassing at their home circuit) and Jenson Button.