Power Unit Use – Update prior to Bahrain

The current generation of Power Units (PU) were introduced last season, together with the limitation of five complete PU per driver per season. For 2015 the original plan was that this would be further reduced to four complete PU per driver, and with the original plan to increase the number of races to 20, this would have required each PU to last for five Grand Prix weekends. Thinks have changed however with the cancellation of the German GP, and a relaxation back to five complete PU following poorer than expected reliability of these new more powerful units this year. So we are back to the same situation we had last year, five complete PU to last the 19 races, so ideally each would last for four GP weekends.

The FIA issue their report into the PU use to date on the Thursday before each race. The report for the Bahrain Grand Prix is shown below: 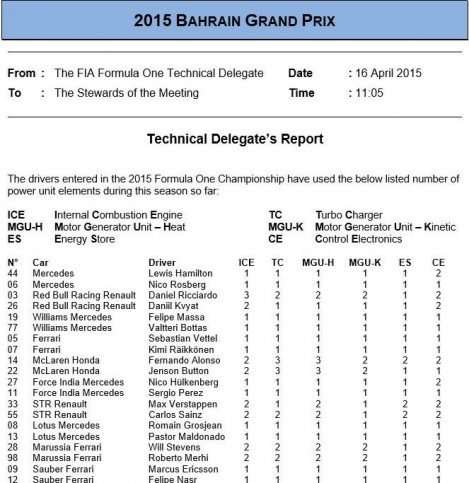 The key thing to note from this is that in the first three races each of the four Renault powered drivers have had to change the ICE and CE, with Ricciardo on his third ICE already and only on his original ES. The Toro Rosso drivers haven’t fared much better, with both using a second MGU-H and ES, while Sainz has also use a TC.

McLaren are also getting through their Honda components at a prodigious rate, both having used three TC and MGU-H, with the only original components being the ES and CE on Button’s car.

Oddly, given how little the team have actually run during the first three events (no running at all in Australia, and only Mehri starting in Malaysia), both Manor drivers have used two of every component other than the ES.

The only slight comfort for Mercedes rivals is that Hamilton has used his second CE, although this component didn’t cause any Mercedes powered teams a reliability concern last season.

Compared to this point last season (going into the fourth race – China in 2014), the overall reliability is much better:

With PU manufacturers having tokens left for development during the year, and each PU needing to last four races, the obvious first opportunity to spend these tokens will be before the next race in Barcelona (the fifth race of the year). This would certainly suit Mercedes and Ferrari powered teams (if they get through this weekend without needing to use additional PU components), for Renault and Honda though, it is possible that they may hold off developments for an extra race or two to limit the number of grid penalties they will need to take later in the year as they use extra PU components.

For Manor, it may free up the spare early 2015 PUs allocated to the Sauber and works Ferrari teams to replace the old 2014 specification units they are currently using. This may require the team to introduce a 2015 chassis in order to get the PU to fit, so again it may be a few races before we see this occurring. It should however give the team a significant performance boost (when you look at how much both Ferrari and Sauber have improved compared to 2014) and won’t cost Ferrari any extra money (they have already built spare PUs for Sauber and the works teams, and if these are superseded by later specification more efficient units they will be replaced without ever having been run). There is some hope that Manor may be able to fight with Force India and McLaren come the end of the season.

Many apologies, but I made an error in the article. I thought the proposal to have five PU for this season had been ratified, but comments in the team principles press conference yesterday have indicated that this is not the case (yet). The relevant questions and answers from the press conference are: Q: (Dieter Rencken – Racing Lines) To Toto, Maurizio and Rob in particular, but Eric if you’d like to comment as well. I’m talking about the fifth engines that were discussed in Malaysia. Toto, you said last week that a proposal had been submitted to the FIA regarding… Read more »

Hey MIE
thanks for keeping us current on this ever more important aspect of post modern F1 competition. being a Alonso and Button fan, and by default now a McLaren fan (again) i say poppy cock to the penalties. McLaren should use the tokens and just go for it. I want to see Honda crank up the power and see if the chassis is as good as the we have been lead to believe…

The first effects of the in-season development tokens may be seen in Barcelona. That however depends on whether the teams are likely to agree to increasing the number of power units this season from four to five. Also, only Mercedes and Ferrari have yet to change a PU early (and are due for a fresh Power Unit at race 5 or 6). So for Renault and Honda, we may have to be a little more patient, as although both have some tokens for development, the increase in performance is unlikely to be sufficient to offset the starting grid penalties they… Read more »