Power Unit Use – update prior to Singapore

The FIA report showing the Power Unit (PU) elements used prior to this weekend (race 13 in the calendar) was published on Thursday: 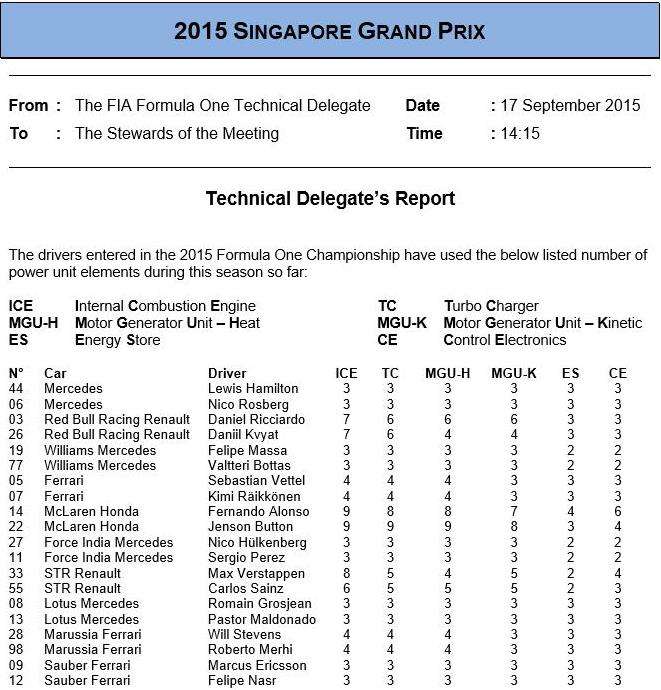 In comparing with the list for this race last year (race 14 in the calendar) we can see just how much reliability has fallen as the PU manufacturers have tried to catch the dominant Mercedes: 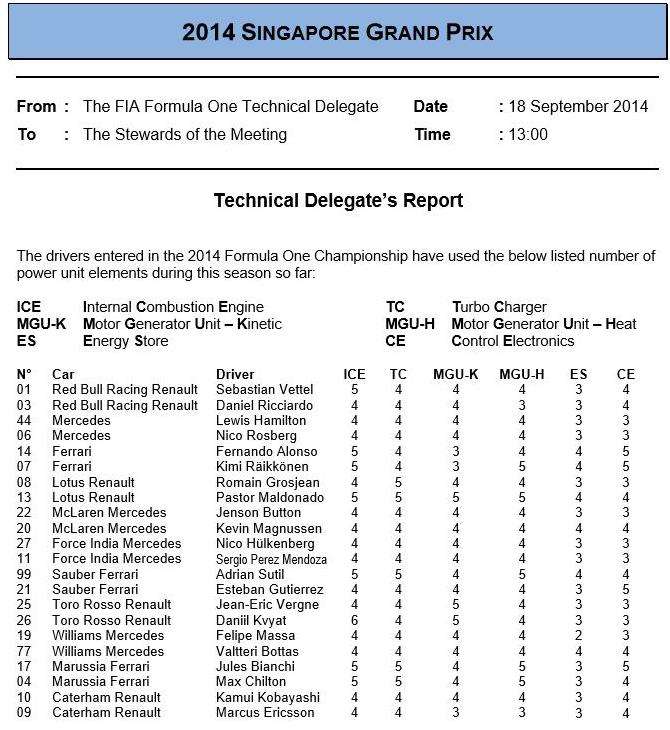 This year they only have four of each before the penalties start applying.  As can be seen from the list, only Mercedes of the PU manufacturers and the Ferrari units used by Sauber are remotely on target to get to the end of the season without penalties.  With the rules changing mid year, to remove the original drive through or stop-go penalties for those that couldn’t drop enough grid places, the Renault powered teams followed Honda’s lead and took multiple component changes last time out in Monza.

Once the driver is starting from the back of the grid it makes sense to use more components so that they have some spare for upcoming races.  The Singapore circuit should not be as damaging for Renault or Honda as it is not as much of a power circuit as the previous two (Spa and Monza), so their teams did not want to take penalties here where they may be able to score some decent points.  This approach has meant that drivers have used more components than perhaps they would have done had the rules remained consistent, so we don’t necessarily have a direct comparison with last year.  However it is not just Mercedes that have improved reliability over 2014, the Ferrari powered teams have also improved as well, even if they may still end up taking penalties.

No-one should need to take penalties this time out, as anyone who was at risk took new components last time, and with the McLaren drivers using their ninth Honda PUs it may become a presentational issue for the FIA about the success of their policy to restrict the number of PUs used per season.  Red Bull and Toro Rosso drivers are not far behind having used six, seven or eight ICE each.

One issue to keep a watch on this weekend is Nico Rosberg’s Mercedes ICE.  Having had to change his brand new unit between Free Practice 3 and qualifying last time out (reverting to a high mileage old unit which expired two laps before the end of the race), he will use his fourth unit for the race.  The team have stated that the third unit that gave problems in FP3 last time out will be used this for the early practice sessions, but as the unit is sealed they have not been able to confirm that it is without fault and so are reluctant to use it in the race.  It may be that the team hope to restrict its use to the free practice sessions for the rest of the year, thus allowing the fourth unit to last Rosberg until the end of the season.  However, if the problem reoccurs and Rosberg needs a fifth unit at some point it will give Hamilton an even easier journey to the championship.

Both Mercedes and Ferrari spent some of their remaining development tokens last time out.  In Mercedes case they used all their seven tokens, and with additional development from Petronas (their fuel and lubricant supplier) it looks like they improved their PU significantly.  Tellingly, their customer teams were not given the new PU (Toto Wolff says it was because they had not done sufficient dyno testing to prove the reliability), but with all the customer teams needing to take a third PU anyway due to the mileage of the previous units, it has given the works team an extra four races with a power advantage over their customers.  Ferrari spent fewer of their tokens (three) so they still have some left, but were able to improve their power output for the long straights at Monza.  Tellingly they did this the race after Sauber had been given the specification of PU that had been updated earlier in the year.  Manor meanwhile are still on the 2014 PU (whether this is down to cost, or simply because the 2015 unit will not fit in the 2014 chassis that the team are still using is not clear).

While Honda have spent some of their development tokens, they still have some to spend, how much impact will be seen this year is unknown, but it may help in their preparation for 2016.  Renault however, have yet to spend any of their tokens.  Last time out there was talk of them using these prior to the Russian or Japanese Grands Prix, but with the deterioration of the relationship with Red Bull (and presumably Toro Rosso) and the purchase of Lotus not yet resolved, it is not known whether they will bother investing the money in further development.