Prior to the action starting in Austin, the FIA issued its Technical Delegates Report into the power unit elements used so far: 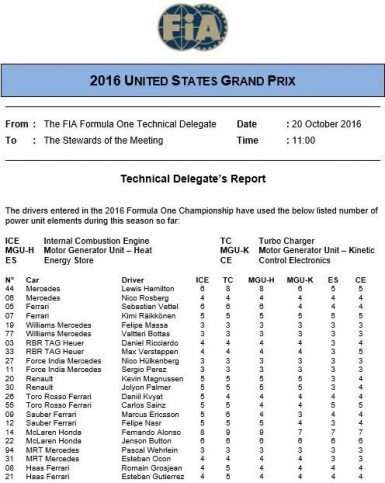 While it was the fifth and final of these elements for Rosberg and the Red Bull pair,  it was only the fourth for the rest of the drivers (all Mercedes customers).

The same eight drivers also fitted a new Motor Generator Unit – Kinetic, but they were joined by three others:

For Vettel and Grosjean this was their fifth and final MGU-K, while for Ericsson it was his fourth.  This MGU seemingly more reliable than the faster rotating unit fitted to the turbocharger.

For Vettel and Grosjean this was their fifth ES, while for the others it was only their fourth.

For all of them this was their fifth element.

All these changes took place before the start of first free practice, and all looked planned changes.  With only three races left, and with each manufacturer having drivers who have used all their allowable power unit elements it is unlikely that any new specification parts will be introduced at this late stage of the season.  What surprises me is that the customer Mercedes teams have chosen to get through the season on only four power units rather than the five permitted.  Perhaps they were given a discount from Mercedes of they could achieve this (ahead of a maximum of four power units next season).  Ferrari have some drivers still using only four elements in their customer teams, but I would expect to see the fifth element fitted before the end of the year.

As for penalties for Mexico, at the time of writing it is unknown if Verstappen’s retirement from Austin will require a change of any power unit elements, or if the damage is restricted to the gearbox.  Kimi Räikkönen is still expected to need a new TC, MGU-H and MGU-K before the end of the season, while Ericsson, Grosjean and Gutierrez are likely to need a new TC.