ProMazda – Three Winterfest races down and three to go

The 2015 Cooper Tires Winterfest for the Pro Mazda Championship is turning out to be a real knife fight between Team Pelfrey’s Jack Aitken and Andretti Autosport’s Weiron Tan. Jack and Weiron fought an epic battle in Race #1, about which you can read in our Day 1 recap, with Jack coming out on top after Weiron recovered from a Lap 1 set-back. Day Two would see the continuation of their on-track battle. 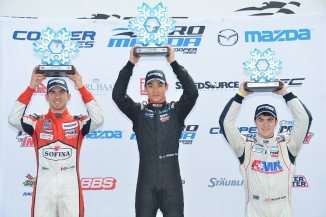 Race #2 did not go as Jack Aitken had planned. He executed a poor start allowing Weiron to easily jump out into the lead and many others to swallow him up. By time he got things back in order, he found himself mired back in the middle of the field. Meanwhile, Weiron Tan was legging it for the checkers, quickly adding more distance between him and the rest of the field with each successive lap. A full-course caution to clean up a front-stretch incident involving Daniel Burkett who backed into the concrete wall separating the track from pit road hard did not help the rest of the field catch the mercurial Malaysian. Once the green flag fell to restart the field on Lap 5, Tan went right back to putting seconds between him and the rest of his competitors. Nicolas Latifi, rookie driver for M1 Racing, drove an amazing race moving up from his starting position of P7 to finish in 2nd. Rounding out the Race #2 podium was Juncos Racing’s Will Owen who did a great job defending a resurgent Aitken.

The battle we saw fought in in Race #2 was rejoined for Race #3. With no one able to best the two rivals’ qualifying times in Race #2, Tan and Aitken started on the front row, but this time Aitken got off to a proper start. After going wheel-to-wheel through Turn 1, Aitken came out in the lead, a lead he would keep in spite of the hard challenge from Tan.

“We didn’t really know what to expect coming in. I’d only done one test before and we seemed to be going OK but no one else was there so we had no idea what our (relative) pace was like. We’ve actually come here and we’re on top so it’s really good. Weiron (Tan) pushed us hard all weekend and he’s going to be tough to beat at Barber as well, so the battles are going to continue, I reckon. My goal really was just to sharpen up my racecraft and make sure I was fresh for the season but he’s given me a run for my money and I’m fully into it already, so for sure we’ll go to Barber looking for more wins. The goal definitely has to be to win the championship.” — Jack Aitken, #82 Team Pelfrey

The agressiveness of Aitken and his propensity to use every inch of the track, and perhaps a bit more, didn’t set well well with everyone. Weiron was exceedingly upset with the Briton and with Race Control’s lack of action with regards to Aitken’s persistent blocking.

“I was extremely frustrated with the officials for Race Three… I got the inside heading into Turn One and was in front by the apex and Jack Aitken had run wide and exceeded the track limits to claim a position. Not only was I mad that he was not told to return the position the next lap, every single lap at Turn One and Turn Five he had exceeded the track limits without fail and a call was not made until Lap 14 in which a warning was given. Even after that he still did the same thing and nothing was done by the officials. I have nothing against Jack or the other drivers, but what I would like to see more fair competition. I race within the rules, so should everyone else. Officials must make things clearer. Race Three was not right and I couldn’t bring justice to it.” — Weiron Tan, #22 Andretti Autosport

With two race wins, Jack Aitken takes the lead of the Winterfest mini-series to the final three races at Barber Motorsports Park. His less-than-optimal results from Race #2 and Weiron Tan’s consistency means that his lead over Weiron is not a comfortable one. Jack only leads Weiron by five points, 83 to 78. The two rejoin their fight in Rounds 4, 5, and 6 at Barber Motorsports Park beginning this Wednesday.

You can follow live timing and scoring at http://promazda.com/results/live-timing.

Previous article
Formula1blog.com Podcast #409
Next article
Susie doesn’t like superlicense rules…and she has a point