Today was definitely a day for the rookies of the Pro Mazda Championship Presented by Cooper Tires to shine and demonstrate their racing prowess! The 2015 Team Cooper Tires Mazda Road to Indy Winterfest began for the Pro Mazda teams and drivers with an early afternoon practice session at NOLA Motorsports Park located in Avondale, LA just outside of New Orleans. Unseasonably chilly weather welcomed the middle rung of the Mazda Road to Indy Ladder with temperature only reaching into the low 50s F.

In spite of the cool temperatures, Andretti Autosport’s Weiron Tan gave a clinic during the first practice session, being the first Pro Mazda driver to post a sub-1:34 time, and continuing to better his times throughout the session. By the end of the session, one other driver, Team Pelfrey’s Jake Aitken, managed to get into the 1:33s as well, but he was still over half a second of Tan’s best time by the end of the session. Dalton Kellett, also with Andretti Autosport, would post third best time as he prepared for his first competitive race in Pro Mazda having moved up from the USF2000 Series in which he drove for Andretti in 2014. 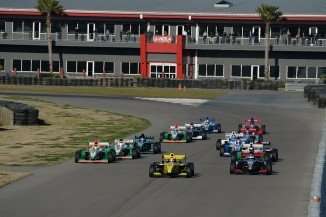 The opening lap did not go as scripted for Tan, although it could have gone a lot worse. Over exuberance on the part of several of the young Pro Mazda drivers forced Tan to take evasive maneuvers to avoid contact. He kept his car on track and unharmed, but instead of being on Aitken’s gearbox as planned, he was 1.5 seconds behind after Lap 1. Being on the first of 17 laps, he had plenty of time to close the gap, and he did exactly that.

Under braking I had to avoid a car that came in pretty hard, so hopefully tomorrow I don’t have to do the hard part of chasing Jack (Aitken) down! It was really fun, actually, until Jack started weaving; I’m not sure you’re allowed to do that. But the race was good – Jack defended well and we learned a lot from Race One. This track doesn’t give you much opportunity to pass, but hopefully I learned something today that I can apply to tomorrow. I’m disappointed we didn’t win the race today, but second place is still good. The team did a great job, and we have five more races in Winterfest, so hopefully we can do even better. — Weiron Tan, #22 Andretti Autosport

Tan did close the gap, and made moves to overtake Aitken for the lead, but the Briton drove very defensively, questionably so according to Tan, and maintained his lead. Aitken never relinquished his P1 spot and scored a victory with a flag-to-flag lead, taking the early advantage in the Winterfest mini-series. Juncos Racing’s Will Owen rounded out the podium assuming P3 from his teammate as Gutiérrez would suffer damage from early contact and finish the race in last position.

Weiron pushed me pretty hard there and definitely had me worried. He started with new tires and we started on scrubs, so I’m happy I managed to hold him off – and we can use our new tires later this weekend. The track only allowed us a couple of passing places and he was a lot quicker than me around the infield, but as long as I could keep some distance before the straight, I knew I could defend it. He surprised me a couple of times but he was never fully alongside so I was able to drive around the outside or shut the door on him. It was a good race and I hope for more of the same tomorrow! — Jack Aitken, #82 Team Pelfrey

There are two more Pro Mazda races at NOLA Motorsports Park tomorrow before the Mazda Road to Indy group heads to Barber Motorsports Park next week for the final three rounds of the Team Cooper Tires Winterfest. Tomorrow begins with a warm-up session at 09:30 CST with the green flag dropping on Race #2 at 11:15 CST and Race #3 at 15:30 CST. You can follow live timing & scoring as well as chat with other fans and race officials at http://promazda.com/results/live-timing.