Mercedes were looking for redemption after the debacle that was the German Grand Prix but when Red Bull’s Max Verstappen snagged pole position for this weekend’s Hungarian Grand Prix, there was reason for pause.

There were a few elements of the Red Bull game that Mercedes were paying attention to and the first of those was the lack of good starts. Unfortunately for Merc, Max got a good start and eliminated that possible easy pass. This left Mercedes and Lewis Hamilton having to earn Lewis’s 7th Hungarian Grand Prix win by other tactics.

In the end, Lewis was able to take advantage of some very good team strategy to secure his 7th win here with Max Verstappen second and Ferrari’s Sebastian Vettel 3rd.

A win for Mercedes strategy realized that Lewis had pace to take the fight to Red Bull and if leading, hold them off. The rolled the dice with a free pit stop for Medium tires and set about closing down the 20s gap to Max on lap 49. Max realized the move was the right call and was upset his team didn’t react immediately while Lewis was telling his team that he doubted the move. In the end, Lewis was able to reel the Dutchman in and make an easy pass for the win. Merc strategy was the hero of the day but Lewis had to execute and he did with perfection.

A win for Red Bull who finished second, fast lap and scored more points for the team constructor championship as well as Max getting the fast lap point. Max had a very good race, didn’t do anything rash and realized that scoring 2nd is a good result for a team that they may all know they aren’t quite the measure of Merc yet.

A win for Carlos Sainz and McLaren who was best-of-the-rest in his second consecutive P5 finish with Lando Norris in the points as well. Carlos drove a good race and helped Red Bull’s Pierre Gasly off for a terrific finish. Unfortunately a long pit stop for Norris meant the team missed a 5, 6 finish.

A win for Alex Albon and Kimi Raikkonen who both had good races with the latter having a very good afternoon and racing well into the points for the entire race while his teammate languished at the back of the grid. 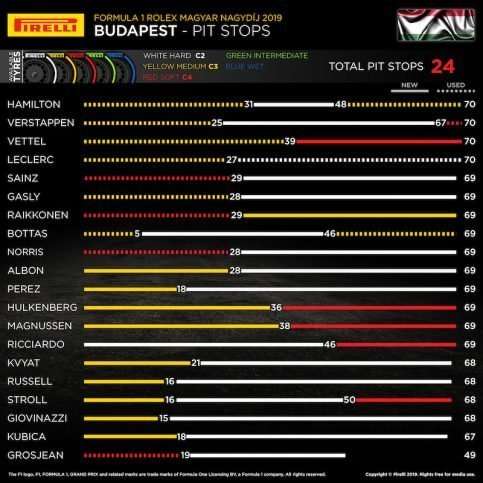 A fail for Ferrari who were not even in the same race as Mercedes and Red Bull in Hungary. Charles Leclerc led Sebastian Vettel for most of the day but when they boxed Set for Soft tires, the German reeled in his teammate and made the pass late in the race for a podium finish but regardless, the Ferrari was not flattered by the Hungaroring.

A fail for Red Bull’s Pierre Gasly who couldn’t have been a good tail gunner for Max but lost several places at the start and was eventually lapped by his teammate. That’s a wasted seat for Red Bull at this point.

A fail for Renault F1 who managed to get beat by their customer, McLaren, and fall further back from best-of-the-rest while spending their time in the press hinting at dumping Nico Hulkenberg and not taking advantage of the talented Daniel Ricciardo. Missing the forest for the trees I should think as the car is the issue and Cyril needs to change that immediately given the resources Renault are investing.

A WTH for Lance Stroll who just couldn’t get around George Russel in a Williams and for Romain Grosjean who was running in the points early on but then retired the car giving Haas F1 another bad weekend.

Also a WTH for the driver cool-down room and it’s beach motif which was…understood but unusual nonetheless…must be Hungarian humor.

Also a WTH for Anthony Mackie who was a complete jerk to Martin Brundle on the grid walk when he attempted to get a quick interview. reminder to Anthony, you play a superhero, you aren’t actually a superhero. Good grief.

Also a WTH for F1 and their grid kids. No idea what that is doing these days but the young girls and boys dressed in traditional Hungarian garb were terrific. The boys looked handsome in their suits and the girls were delightful in their dresses. Putting grids kids in Chernobyl-style white coveralls and hiding them until the anthem is just silly. Why not bring back grid women and men in traditional dress? Maybe dress from the 50’s as a nod to F1’s history? 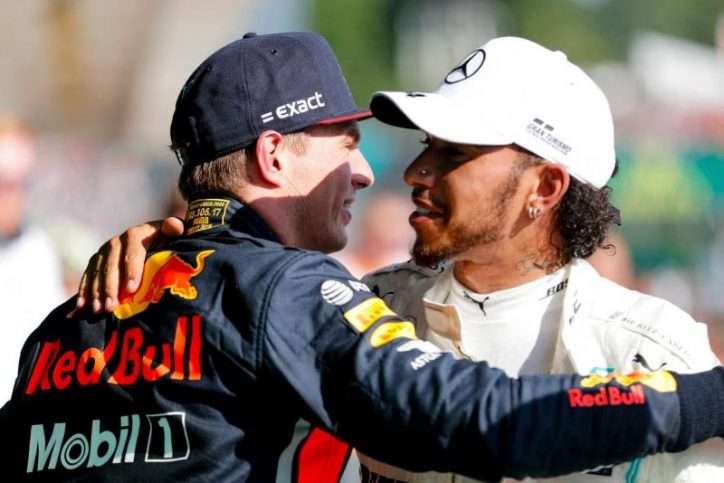 So how many more WTHs will Haas have before some big changes are made?

I’m ready to call it right now at the mid-season break: Ferrari is now the 3rd best team in F1. RedBull and Honda are more than the equal to the Scuderia. One must wonder if they could had surpassed them in Constructor points if RedBull had a better 2nd driver on-board. How soon will silly season rumor-mongering revolve around who could be/should be Ferrari’s next team manager? And one more Fail: this one goes to the broadcaster FOM and their annoyingly obvious virtual track-side ads for F1 Play filling every wide shot. Just stop it.

I wonder with the dominance of the Mercedes and we know they were accustomed to sandbagging at quite a few races. Now that RB are getting on top of things they seem to be getting very close to Mercedes (actually pushing Mercedes to the point I believe they can no longer sandbag). This is making Ferrari look like they are going backwards when in actuality it’s the RB and Mercedes which are starting to honestly push each other during the race.

It will be interesting 2nd half, me thinks!

Previous articleVerstappen ‘lots of drivers could win 5 titles’ in the Merc
Next articleTPF Podcast #641 Hungarian GP Review
The Hungaroring isn't known for producing prolific passing or lots of action but the strategy game was in full swing on Sunday and that made this race a fun one to watch. Lewis's execution of some terrific Merc strategy was terrific. Negative CamberRace Report: Hamilton, Merc strategy beat Verstappen in Hungarian GP