The Belgian Grand Prix can produce amazing races but it can also produce a more pedestrian race that exposes the division between car performance and strategy. Sunday’s race was the latter. Mercedes led every lap, the 30th race they’ve done so, and Lewis Hamilton took his 89th victory.

There was a hope in Red Bull’s camp that they might catch Mercedes out by keeping pressure on them in hopes of a tire issue for the German marque. That never happened and Max Verstappen couldn’t keep up.

As the top three trundled around in tire management mode, it was the Renault duo of Daniel Ricciardo and Esteban Ocon taking 4th and 5th as well as the spirited drive from Pierre Gasly that provided the excitement in Belgium.

A win for Mercedes who managed their tires and brought the two cars home for a one, two. With Lewis worried about a tire failure, Bottas failed to mount any challenge to keep some glimmer of a championship challenge but he did bring it home in second. For Lewis, his record-breaking pole position was converted into a victory and was the 89th win of his career.

A Win for Renault who managed to get both cars well into the points for a 4th and 5th place finish. A win for Daniel Ricciardo who took fastest lap on the last lap of the race and for Esteban Ocon who finished on his teammate’s tail. It was sadly a glimpse of what could have been for the Ricciardo/Renault relationship had they given the Australian a car to compete. That will sadly never be a reality as Daniel heads to McLaren in 2021.

A win for McLaren’s Lando Norris who put in a tidy race setting very competitive lap times late in the race to secure 7th place and that’s a good result given the fact that his teammate, Carlos Sainz, never started the race due to an exhaust failure.

A win for Pierre Gasly who had a terrific race and converted and Hard tire stint and Safety Car strategy to recover through the field providing most of the exciting passing all day. Pierre finished in 8th place giving the team crucial points and was voted “Driver fo the day” at F1.com.

A fail for Ferrari who were beaten by their customer team, Alfa Romeo, in the hands of Kimi Raikkonen. Ferrari, and all of their customer teams, suffered with a severe lack of shove from their engines and are already fretting Monza next weekend.

A fail for Red Bull and the Medium tire final stint for Alex Albon. The tire degradation was too high and this cost Alex a realistic chance to go after Ricciardo for 4th and cost him 5th place to Ocon.

A fail for Antonio Giovinazzi who lost the rear end of his car, hit the wall and caused a collision with Williams F1 driver George Russell putting both drivers out in a very scary crash.

Not quite sure what happened to Racing Point’s pace given they are referred to as the “Pink Mercedes”. With enough shove in the back of the car, was it a setup issue, downforce issue or where was the pace lost at Spa Francorchamps?

Most discussion has alleged that Ferrari’s engine in 2019 was illegal and the secret agreement they made with the FIA that made changes to their engine is now blamed for the engine’s serious lack of pace as evidenced by the Belgium Grand Prix performance from last year. Whether that is true or not, the question is, can the team do anything to find the pace in their engine that they are lacking for the rest of 2020 and even in 2021? 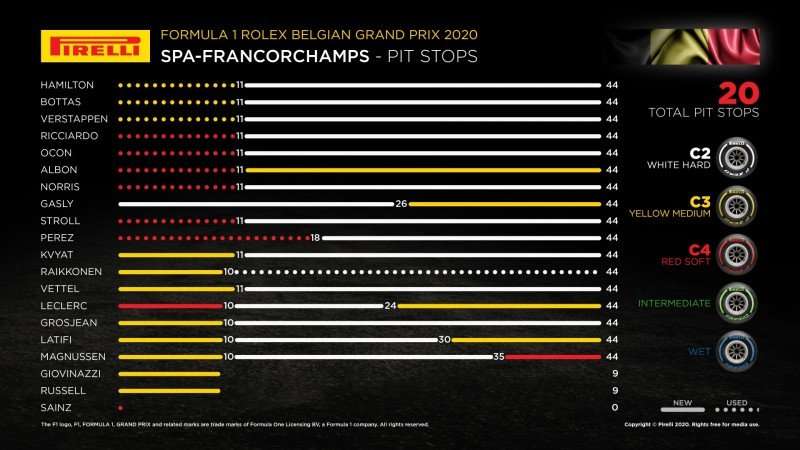 Not even a WTH mention for Haas.

Even the engine ‘fix’ from last year can’t account for the serious lack of Ferrari pace in 2020. Did you see the side by side comparison? If you consider how the car was after the ‘fix’ in 2019, it did not account for that amount of lack of pace. At this point, they need to do the Grosjean suggestion and go back to the last configuration that worked half assed well. In this case, get the 2019 unit out of moth balls.

Previous article
Hamilton on pole for Belgian GP
Next article
TPF F1 Podcast Ep 697 Belgian GP Review
Sure, it was a pedestrian affair but I'd take an average Spa Francorchamps over many other boring tracks. Race Report: Hamilton takes Belgian GP victory