The British Grand Prix began as a straightforward event with both Mercedes cars of Lewis Hamilton and Valtteri Bottas leading the way comfortably pacing a second a lap faster than the rest of the field. As each of the 52 laps unraveled, the racing got more interesting in the midfield and by the end, it became a tire preservation race that saw both Mercedes experience flat tires in the final laps of the race.

The drama began with three laps to go when Bottas experienced a front left deflation and had to box for fresh rubber leaving him out of the points and then Hamilton’s tire deflating on the last lap leaving the 6-time champion limping the last few corners to cross the line for victory with only three inflated tires.

The late-race drama still saw Hamilton claim the win making it his 7th British GP victory and with Bottas out of the points, the thoughts of any championship battle have taken a serious blow for the Finnish driver.

Red Bull boxed Max Verstappen late in the race for a shot at the fastest lap as they had plenty of time in hand to do so without losing track position. The stop created a 30+ second gap to Hamilton and had they not done so, they most likely would have won the grand prix. Ferrari’s Charles Leclerc managed to bring his red car tom on the podium in third.

A win for Hamilton and Mercedes who managed to limp the car home for the victory and luck being a fickle partner, it certainly revealed itself within Lewis’s side fo the garage as Bottas was out of the points and Red Bull were focused on a fast lap instead of monitoring the tire issues Mercedes were having in the last laps.

A win for Charles Leclerc who managed 3rd despite the struggles Ferrari had at Silverstone all weekend long. Also a big win for Daniel Ricciardo who managed to bring his Renault home in 4th ahead of the McLaren’s and while he didn’t look completely comfortable in the middle of the race, it was his late-race pace that delivered much-needed points.

Esteban Ocon, who has had a very quiet return to F1, managed to bring his car up the grid to finish just behind Norris for a well-earned P6. Ocon needed a good race and delivering a P6 performance behind teammate Ricciardo gave Renault some serious points in the Constructor’s Championship. A good way to celebrate Alan Permane’s 500th grand prix.

A win for Pierre Gasly who clawed his way up from 11th to 7th and stayed ahead of Alex Albon, the man who replaced him at Red Bull. Pierre drove a great race and was competitive all day. Alpha Tauri had a mixed day with the crash of Daniil Kvyat but up until his accident, both drivers were running very well and Gasly executed with precision.

Ok, it isn’t points finish but George Russell had a good day and was knocking on the door of points at his home race and I’m happy to see that.

A fail for Racing Point who entered the weekend with a COVID-19 positive test for Sergio Perez that sidelined him for the race and even though they made a great choice in bringing in Nico Hulkenberg as a reserve, the team couldn’t get his car fired up and on the grid for the race. During the race, Lance Stroll lacked the pace many expected from the pink car and languished at the bottom of the top 10 to finish 9th. What happened to Racing Point’s pace?

A fail for Red Bull who already had fast lap in hand with Alex Albon’s late-race box for fresh rubber and after Bottas’s tire deflated—it visually appeared the same as Hamilton’s—the team boxed Verstappen to go for fast lap but had they left Max out, he would have had the win. Hindsight is 20/20 and the team were quick to say there was no guarantee that Max would have won as his tires were dodgy too but I suspect they would have held on as does Paul di Resta for Sky Sports F1.

It wasn’t the best of days for McLaren who were beaten by Renault at their home race. The late-race deflation of Carlos Sainz’s tire was not good and thankfully Lando Norris was able to bring it home in 5th but I wonder if he lost the place to Ricciardo due to being stuck behind Sainz who was clearly struggling for pace with a vibration on his tire?

What in the world was happening in Sebastian Vettel’s side of the garage? His teammate manages a podium and he’s in 10th place in a car that looked intent on fighting him all weekend long. I’m not sure what is happening inside that team but Seb is not a driver who cannot work around issues and improve a car’s handling.

I am not sure why Alex Albon is struggling lately but his clash with Magnussen and the penalty it produced was a bit harsh in my opinion. He had a good recovery drive from last and held fast lap until Max took it away from him. Alex did well at Alpha Tauri and when Gasly was sent back down, he’s done well there too but both drivers struggling at Red Bull has me wondering what pressure is being applied at the top team?

Extinction Rebellion? Can we have one part of our lives that isn’t steeped in politics, causes, awareness and other important issues that are much better placed in the other parts of our lives? Everyone has their opinions, ideology and causes but I would like to simply have a race please.

What happened to the Pirelli’s and will this be a bigger tactical element next week when softer compounds are used? Pirelli boss Marios Isola said:

“We’ll of course be investigating exactly what happened to the tyres on the two Mercedes cars as well as that on the McLaren of Carlos Sainz in the final two laps of the race. What we already know for sure is that the tyres involved in these failures were extremely well-used, with nearly 40 laps of running; albeit some behind the safety car. The race was very much influenced by the safety car, with the second one prompting a pit stop for nearly everyone, leading to a very long second stint. After a complete analysis we will be able to understand fully what happened, which will obviously be very valuable information for next weekend.”

He has a point about running them long after the second safety car period. The deflations of Carlos Sainz, Lewis Hamilton and Valtteri Bottas are certainly being looked at and Mercedes in particular were blistering but Carlos said he had a vibration too and Red Bull said the Max’s tires looked dodgy as well. I also think there should be a close look at Daniil Kvyat’s tires as well. I am not sure that accident was his fault. 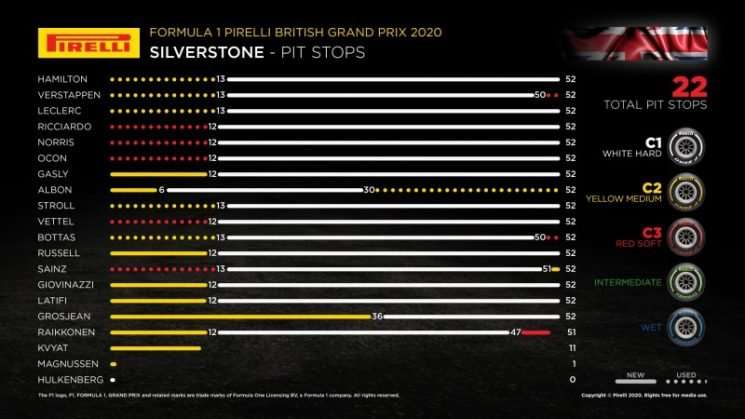 While that was an exciting race, the flat tyres totally killed my F1 Fantasy score.

Getting my tinfoil hat on for this one, I wonder if the RP’s lack of pace was due to them having to change something on the car because of the Renault protest?
Just putting it out there.

I thought the same thing. :)

Previous article
F1 British GP: Hamilton takes pole ahead of Bottas
Next article
TPF F1 Podcast Ep 693 British GP Review
The race started out as a pedestrian dominance of Mercedes but there was some drama toward the end that woke everyone up. Race Report: Hamilton wins British GP on three wheels