As the glaring light of the 2018 Formula 1 season begins to wane, whatever performance gains Ferrari had made at the summer break have seemingly been diluted by Mercedes and their huge development push to recapture their advantage and this weekend in the lead up to the Russian Grand Prix, it seemed they certainly had all the answers.

Lewis Hamilton continued the 100% domination record for Mercedes at the Russian Grand Prix winning the race and extending his lead to 50 points to his rival Sebastian Vettel. The celebrations were a bit damp due to Mercedes calling team orders by moving Valtteri Bottas over so Lewis could take the lead and win. Valtteri finished in second behind his teammate with Vettel in third.

A win for Mercedes and Lewis Hamilton by extending their driver and constructor championship leads irrespective of team orders. The result was exactly as the team needed them to be but reading fan comments, it leaves a sour taste in their mouths…or in social media terms, their fingers as they type their comments.

A big win for Red Bull’s Max Verstappen who started 19th and managed to claw his way back to 5th through some terrific passing and measured driving. A terrific result for his 21st birthday drive. In retrospect, his teammate, Daniel Ricciardo wasn’t making up similar ground due to a front wing issue that was eventually changed so to finish in 6th was a decent result considering he was driving a difficult car for his first long stint. 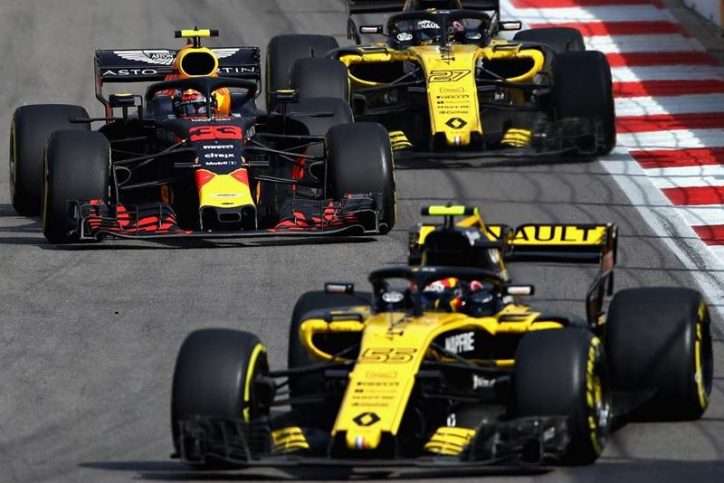 A big win for Sauber’s Charles Leclerc and once again, this young man is showing why Ferrari picked him for 2019 as he is putting in performances beyond the cars capacity and turning in to something very special indeed. Charles beat the typical best-of-the-rest teams such as Haas F1, Renault, Force India and that’s huge! The car’s ultimate pace is a bit of good news for Kimi Raikkonen as well as he’ll take the wheel in 2019.

A quiet win for Haas F1’s Kevin Magnussen who did well to fight off the dual attack from Force India all day. Kevin had an aggressive defense but nothing untoward as stewards reviewed it. Force India may not have finished in 8th or 7th but the dual points finish is what they needed to pull closer to McLaren in the constructor’s championship in 6th.

A fail for Ferrari who needed a win but have slipped back behind Mercedes it total performance. An overcut from Sebastian Vettel seemed like it may work but the Ferrari simply didn’t have the pace to keep Lewis behind them. The championship was coming down to small details but it could be back to clear Mercedes domination at this point.

A fail for Valtteri Bottas who had pole position and led the race with no struggles only to be asked to move over for Lewis. This isn’t what Bottas wanted and Lewis said it wasn’t what he wanted but nonetheless, Valtteri lost the race he most likely should have won. 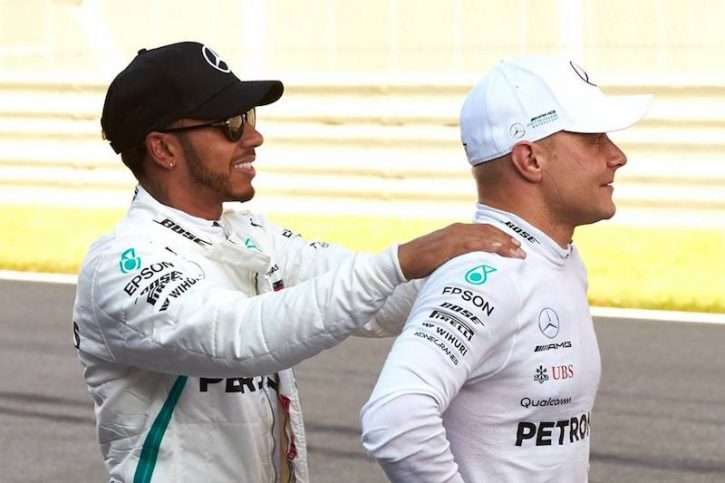 A fail for Toro Rosso who had brake issues with both cars spinning on the 6th lap and then retiring both at the end of that lap.

A fail for both Renault and McLaren who were nowhere near the best-of-the-rest performance finishing well out of the points in a race with a mixed grid and several cars out of place.

A fail for Sergey Sirtokin who managed to out qualify his teammate, Lance Stroll, but then finished dead last in his home grand prix in 18th while stroll managed to finish in 16th.

A fail for Marcus Ericsson who’s teammate managed points while he languished in 13th and provided more justification as to why the team would sign Kimi and Giovinazzi for 2019.

Team orders are still a pall on the sport and perhaps some of that is the obvious body language, the comments and sheepish statements from drivers and team members as well as the press. Lewis apologizing for denying Valtteri the win, Paul di Resta setting the podium interview stage as a result that wasn’t legitimate or unfortunate. These all leave fans in the position of being towed into the emotionally negative place.

Lewis said in post-race press briefings that he didn’t want team orders and tried to make it clear that it was not something he asked for, it was the team’s decision. Lewis said passing Valtteri didn’t feel good and he didn’t want it but it is what the team wanted. I also found it very interesting when Lewis pulled Valtteri onto the top of the podium with him exactly as Michael Schumacher had in 2002 at the Austrian Grand Prix that caused such an outrage at the time. 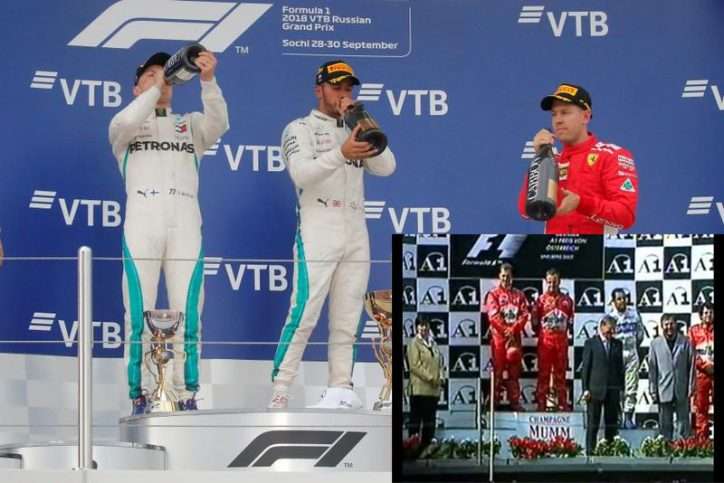 Interestingly, it was Sebastian Vettel who came to the defense of Mercedes and their team orders by suggesting the press were being too harsh. Sebastian said it was the obvious no-brainer decision to take and secure maximum points in the driver’s championship. 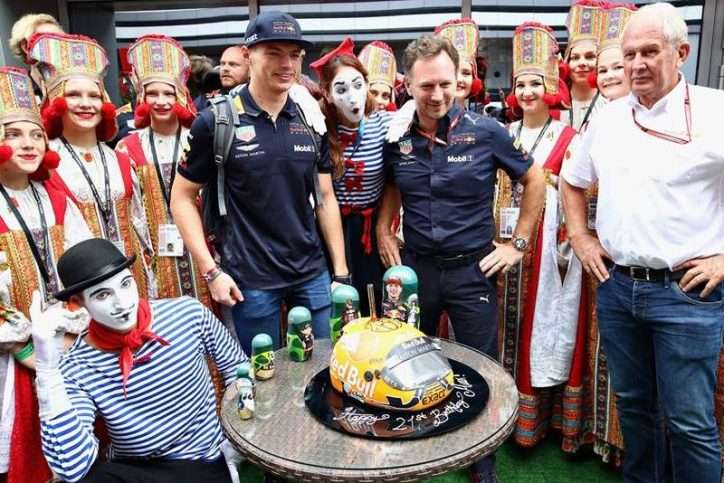 Wolff on Saturday – “It is going to be difficult to tell him ‘you are not allowed to race’ after putting it on pole”
Wolff on Sunday – no problem telling Bottas to let Lewis by.
They could have easily corrected this on the last lap as Bottas had 4 seconds over Vettel. A huge bummer to ruin Bottas’ excellent weekend.
Maybe I’m just butthurt because my guy’s (Vettel) championship chances are as good as done, but it seems 43 points would be as good as 50 in that case.

Only good thing about today’s “race” is that commentators may now have fodder with which to tease viewers with the possibility of a reverse play in an upcoming race after the points race is a fait accompli. They yakked that up for a good long while. Not long enough: Anything would be better than following and yakking up a meaningless MAG-OCO-PER train for lap after boring mid-race lap; note that the gambit under discussion involved HUL who was, um, not involved at all in any way and finished behind the train. Sure VER deserves drive of the race, keeping in… Read more »

See if you can find the F2 and F3 races from the weekend, they were manic. Very close hard racing.

I got up in time to watch but nodded off after about 20 laps. I need to get a DVR. Otherwise it’s on again later this afternoon. I don’t like team orders, but understand them. The principles just need to be more open about them and yes accept them when done by others.

I record the races but lately just read the headlines and go do some dvr cleanup.

Boring races, biased media, unwatchable broadcasts, general tone of all forums has sucked every ounce of enjoyment out of being an F1 fan.

I think I need to take a year or two break and revisit… Not sure I am up for all the off track drama and on track processions next year.

I just want to watch racing and there are many other series that provide that.

A wise person once told me . . . “just because you can doesn’t mean you should”. Just because Merc could call team orders, doesn’t mean they should have. That call just ruined the race for me. I almost turned off the television when that move happened. It’s called racing for a reason. With 5 races left in the season, team orders were not necessary. If it came down to the last race of the season and that move would give Lewis the title, then I could understand it. But we’re not to that point quite yet. I wouldn’t feel… Read more »

No mention of the fact that for the first time this season we had a race without a safety car or virtual safety car. Fifteen races on the bounce that required a safety car, yet no-one got close enough to need one today.

Good point Dave, apart from a short burst of yellow flags, a ‘clean’ race. Nice for a change.

For Bottas and Hamilton to switch back places at the end of the race, Lewis has to slow down so he can get by. But as Bottas moves towards him, Vettel is coming as well!!! I promise you if Vettel had been in 6th, Mercedes would have been much more likely to do it. As it was, they knew that if they had Hamilton and Bottas reverse order, which would require Hamilton to slow down, there was a real possibility Vettel could have got by Hamilton by the end of the race. This is just the way it goes! If… Read more »

Are you saying that Hamilton can’t give up a spot as well as Bottas?

I have no problem with team orders. I just hope that if Hamilton locks it the championship, that team orders work the other way to help keep Bottas ahead of Kimi for 3rd.

A team can order anyone to give up any spot they like. What I am saying is that asking Hami to give up a win to Bottas was a risk. I did the F1600 support race at the Canadian Grand Prix last year and I was leading my class and the team I was racing against for the win had another car in a different class ahead of me, so he ordered that driver to slow down and back me into his oither car who was in my class (I know that was confusing). In the end I finished ahead… Read more »

I’m not sure what all the fuss is about.
Its a team sport, Mercedes are the team and call all the shots.
Mercedes want to win the Driver’s and Constructor’s championships. Maximising Hamilton’s WDC points without reducing their WCC points is the best strategy to achieve those things.
The only thing that surprises me is that apparently Mercedes weren’t absolutely clear, to Bottas, about what was going to happen before the race.

You have to love F1 media and fans.
There were lots of great things about that race, Verstappen’s charge through the field, and 30 laps in the lead (without hitting a single car), (If you’re a Mercedes / Hamilton fan) their return to form over Ferrari, Le Clerc taking his Sauber to 7th, Ocon and Perez ‘playing nicely’ to maximise RPFI’s chances, the alleged pace of the Honda Upgrade p.u, Bernie’s goatee, etc, etc, but all the reports and comments are dominated by the team orders ‘controversy’.