The Sakhir Grand Prix was already starting with an oddity in that Lewis Hamilton contracting COVID-19 meant that George Russell would be starting in Lewis’s Mercedes, Jack Atiken would sit in for Russell and Pietro Fittipaldi would sub for Romain Grosjean in the Haas F1.

The oddity didn’t stop there with lap one taking out Max Verstappen and Charles Leclerc as well as punting Sergio Perez’s Racing Point to the very back of the grid for the race restart.

The oddity didn’t stop there with George Russell passing Valtteri Bottas, leading the race, avoiding power issues and looked set to win his first race in Formula 1 only to have the taken away by a bit of a clown-show down in the Mercedes pits with wrong tires and then a slow puncture.

The oddity didn’t stop there as Sergio Perez managed to turn a first-lap incident into a 1-stopper that saw him scythe his way through the field, take advantage of attrition and VSC periods to take his first win in Formula 1 and overhaul McLaren for third place in the Constructor’s Championship.

A big win for Sergio Perez and Racing Point for a terrific win in Bahrain and a really nice third place for Lance Stroll. The results move Racing Point firmly into third place int eh constructor’s championship worth millions and gives Mexico its first win since 1970 thanks to Sergio Perez.

A win for Renault who managed to get Esteban Ocon in an undercut position passing Stroll and allowed the Renault to secure a 2nd place finish which Esteban desperately needed. Daniel Ricciardo’s podium and performance this year has overshadowed Ocon so this podium is a big boost for him.

A win for George Russell who looked quick all weekend in a car he’d never been in. George had this win in his pocket and even when the first VSC period lost him the lead, he re-passed his teammate, Valtteri Bottas, took the lead and then got gutted by a slow puncture to drop him to 9th. George’s performance tells several stories about the Mercedes, Bottas, Hamilton and Russell himself. However you read those stories is up to you but in the end, Russell did a stellar job and I’m not alone in hoping to see him get another chance in Abu Dhabi.

A win for Carlos Sainz and Daniil Kvyat who maximized their situation even though, in Carlos’s case, the VSC caught him out and cost him positions but a 4th and 7th respectively, it was a good result for both.

A fail for Mercedes who managed to put on a bit of a clown show denying George Russell his first F1 win. Leading into the weekend, it was about the mighty Mercedes given young George a chance and did he have enough in him to merit driving Hamilton’s car or would he let the team down? In the end, he delivered more than the team could handle apparently as they turned a stacked pit stop into a crime scene and then boxed George for a puncture leaving the young Brit gutted and the world gutted for him. Lewis has the title, let’s give George another shot at a win in Abu Dhabi and allow Hamilton some R&R.

A fail for Charles Leclerc who succumbed to the rookie-like late breaking bumble-fest by diving underneath Max Verstappen, locking up and clouting Sergio Perez leaving an uninspired Sebastian Vettel to trundle around to 12th for the Scuderia.

A WTH for Valtteri Bottas who seems to have a black cloud of bad luck following him everywhere these days. Being beaten by a kid who’s never sat in that car until Friday is not something he’ll want to put on his CV for 2021. Listeners with good memories will recall this is why I advocated putting Russell in the Mercedes for 2020 to have a couple years to understudy with Lewis Hamilton but Mercedes chose to continually renew Valtteri’s contract. I wonder if there are a few in Mercedes who are re-thinking their 2021 contract with Bottas now? I know I have been for two seasons now.

A WTH for Pierre Gasly as he looked quick all weekend and I hated to see him get caught out and lose ground to finish down in P11.

A WTH for Jack Aitken who wrecked George Russell’s car, caused the SC that created the Mercedes clown show that cost George the race. 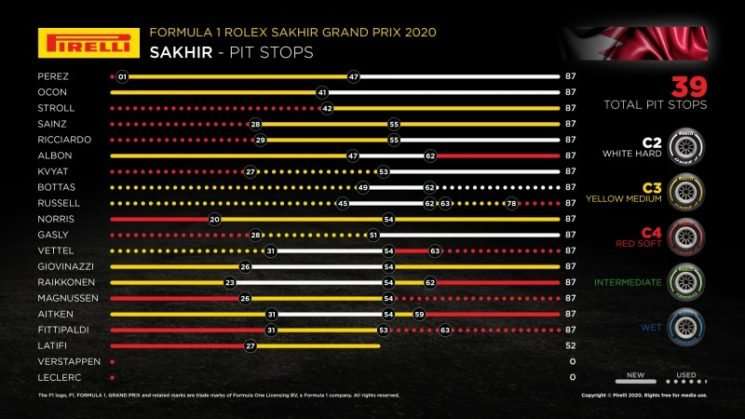 That was the most entertaining race of the entire year. The racing itself was fantastic. I’d like to see this be the layout they use every year.

Win/win, Russell proved he’s got it and Checo got a long deserved win. I really like Albon but Checo should be in that seat next year.

It was too late as well, the damage to LH and VB’s reputation was well and truly done by then.

Exciting race with the best driver out of the best car.

How about every driver has one bye-week each season? I mean as far as gimmicks go it would cost nothing (except a few cars the rookies will bin) would be evenly applied and would create opportunities for young drivers. I mean this was the most interested in an F1 race I’ve been in years.

I agree NC that you have been advocating for George and he’s proved himself every bit as capable as you thought. I’d respectfully suggest that proves you wrong not right though. Lewis is a brilliant, paranoid, insecure driver and I don’t think Mercedes fail to appreciate Valterri’s inferiority, I think it’s his most valuable quality. Looks like he’s trying to be Champ but never really threatens the Champ. How long you think it would take for Lewis to unravel with George in that seat?

Previous articleBottas, Russell on front row for Sakhir GP
Next articleThe Parc Fermé F1 Podcast Ep 711 Sakhir GP review
A great win for Sergio and from a guy who has no ride after next week! Also a terrific debut for George Russell and the outer loop of the Bahrain circuit proved to be a fun race to watch. Negative CamberRace Report: Perez takes first F1 win at Sakhir GP