There’s always a threat of rain at the Japanese Grand Prix but even though the clouds were overcast, the rain seemed to spare the Formula 1 sessions from a deluge. The drying track, due to overnight rain, presented drivers with the challenge of changing levels of grip and tire degradation. The clouds did reduced temps, both ambient and track, and that worked into the equations of every team’s strategy.

Nico Rosberg made a good start and controlled the race that handed his team the Constructor’s Championship as Lewis Hamilton fought back to 3rd with a terrific drive of damage limitation following a poor start.

Nico Rosberg needed a good start and that’s exactly what he got and it helped that his teammate didn’t. A win for Red Bull’s Max Verstappen and both Ferraris who all had good starts too. Nico gets a win, literally, for controlling the pace and managing his tires and power unit and extending his points lead to 33. Nico’s first win at Suzuka.

A win for Lewis Hamilton who had a miserable start that dropped him back to 8th and yet he managed his strategy, car resources and blue flag issues to come back to the podium for 2nd in a mighty damage limitation drive. It was a poor start but arguably the drive of the race.

A win for Max Verstappen who managed to hold off a charging Lewis Hamilton to claim 2nd and he did a masterful job of managing his tires to keep himself within pace of Rosberg and capable of holding off Hamilton. Max was voted by fans as the driver of the race and that’s hard to argue with except for the bloke that won it and Lewis’s terrific recovery drive.

A Win for Force India with both cars in the points and ahead of their closest rival, Williams F1 which extends their lead in fourth in the constructors’ championship.

A big win for Mercedes who secured the constructor’s championship with both cars on the podium. A great job for the team and great win for the Silver Arrows. Their third title in a row.

You can probably add Ferrari in the win column with a 4th and 5th place but you could easily argue that they just narrowly missed out on the podium with Kimi’s gearbox change and Sebastian’s blue flag and aggressive role of the dice on soft compounds for his final stint.

It was the last thing Lewis Hamilton needed but a poor start from the world champ is exactly what happened and while he apologized, he felt bad about his efforts as he sank back to 8th in the opening laps. One has to wonder if this race wasn’t his if he’d managed a decent start.

Fails for McLaren and Ferrari for taking grid penalties just ahead of the race that saw both Button and Raikkonen drop down the order. Not a huge issue for Button but Kimi had qualified so well and it was a shame to lose the positions.

A WTH moment for all of the blue flag frustrations. Sebastian Vettel was apoplectic over the slower drivers not moving out of the way and to be fair, he wasn’t alone with Max Verstappen and Kimi Raikkonen both bemoaning the lack of blue flag compliance. The reality is that Suzuka is a narrow track and it’s difficult to get out of the way but there were a few instances of poor execution and one in particular for Lewis Hamilton and a Renault. It brings up the entire concept of blue flags with many fans calling for the elimination of the race regulation.

A WTH race for Haas F1 who had a terrific qualifying session started the race on the same strategy as everyone else but left it too late for pit stops and got caught out falling to the back of the grid and out of the points. In fairness, Romain Grosjean did manage to fight back to 11th and was the last car on the lead lap.

A WTH moment in the cool-down room as there was a pall over the room and very cold given the team just won the title. Regardless, Nico was smiles but not a lot of chat even when Max tried to lighten the mood and chat up Nico.

I’ll need to do the math(s) to figure out why Daniel Ricciardo was 30s behind his teammate. I know he got held up but not quite sure why that happened. 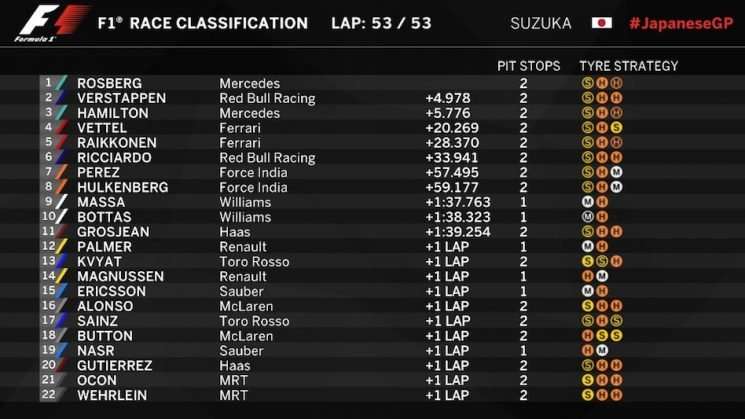 Hmm you have Lewis in both win and fail. I suppose his race exhibited both but when you’re trying to be world champion, when you ARE currently world champion, partially ameliorating your own mistake has to net out as a fail. When you choke after claiming to be bigger than the media and the sport through a series of childish acts and tantrums, it’s a self administered humiliation. Have to admit I’ve been wrong about Kimi. His unflappable mind is rare in F1 and just what a disappointing team needs to get the max possible under the circumstances. Well done.… Read more »

“I’ll need to do the math(s) to figure out why Daniel Ricciardo was 30s behind his teammate. I know he got held up but not quite sure why that happened.” Ricciardo’s engine was on its last legs and was delivering less power on the straights. He mentioned it after qualifying, and said that it may have started on the decline during the Malaysian GP. Ted’s qualy notebook described it as “asthmatic”. You could see the lack of power in his car when Vettel just breezed past him on the back straight. Other than that, he was indeed held up by… Read more »

Previous articleHamilton walks out of media brief; scolds press
Next articleMerc withdrawal protest of Verstappen move; Lewis tweets about ‘idiot’
Race Report: Rosberg wins Japanese GP; Merc wins titleI enjoyed the race and thought there were some really good battle and passing in some tight corners. Suzuka is always a great track and no rain meant we got to see the cars at full chat. Also, Merc claims the title too.