The Belgian Grand Prix had a lot to answer for given last year’s unfortunate rained-out debacle but it started with a raft of penalties which made qualifying and the final grid positions a mathematic equation akin to determining the airspeed velocity of an unladen Swallow. That’s not the race’s fault, just an FIA and F1 issue they need to sort out for a more palatable viewing experience.

Despite that, it was going to be a difficult weekend for both Red Bull’s Max Verstappen and Ferrari’s Charles Leclerc as they took engine penalties leaving them to start in P14 and 15 on the grid. Well, that was the theory anyway but Max stormed back in a handful of laps and took the victory in a weekend where he and the car were simply sublime.

A big and demoralizing win for Red Bull and Max Verstappen. If Toto Wolff and others felt that the FIA technical regulation tweak to the floors would slow Red Bull down, it wasn’t evident at the mighty Spa Francorchamps—in fact, the Red Bull in Max’s hands looked even faster than before the summer break. It was a master class in patient and punishingly fast driving from Max with teammate Sergio Perez behind him for a very nice P2 finish maximizing points for the team. It also moved Perez ahead of Leclerc in the Driver’s championship.

A podium is a win for Carlos Sainz but his Ferrari seemed to struggle a lot with degradation and the team tried to manage the strategy as best they could but he ultimately succumbed to quicker Red Bulls and had to fend off a recovering George Russell in a Mercedes.

A win for George Russell who found his Mercedes slightly happier with the warm weather on Sunday and the allowed him to take P4 while challenging for a podium no less in the waning laps of the race. He continues his consistent runs despite the lack of pace his Mercedes affords him. George extends his lead over his teammate in the Driver’s championship by 24 points.

A win for Alpine with Fernando Alonso in P5 and Esteban Ocon recovering up to P7. The dual-points finish puts tremendous heat on McLaren as Alpine has its foot firmly on the “best-of-the-rest” position in the constructor’s championship.

A win for Sebastian Vettel in his last Belgian Grand Prix to finish P8 but also a win for Pierre Gasly in P9 and a big win for Alex Albon in his Williams bringing home another point in P10.

It was a fail for Ferrari who looked quite a bit behind Red Bull all weekend. One might argue that this track wasn’t going to flatter the Ferrari and I think that’s true but once again, a few minor strategy bobbles with Leclerc’s tires and a speeding in pit lane penalty dropped him down to P6. Carlos Sainz held on for a podium but having taken pole position, that’s cold comfort. It just isn’t panning out for Ferrari with strategy issues, unforced errors from Leclerc and inconsistency from Sainz. A long shadow of defeat is creeping over the heads of the Italian team for 2022.

A fail for Lewis Hamilton who squeezed Fernando Alonso on the first lap launching his car into the air and prompting a scathing response from Alonso. Hamilton admitted he was to blame and curiously he did not receive a penalty for the error which I think may have been dolled out if it were any other driver to be honest. It’s a shame because I think Lewis could have done well given the higher temps and he may have even had a podium had he not had the incident with Alonso.

A fail for McLaren with Lando Norris boxed and released into traffic and a DRS train to finish P12 and Daniel Ricciardo dropping to P15. McLaren have lost the “best-of-the-rest” spot in the championship and need to turn their luck around quickly.

With the entire world of F1 fans screaming for consistency over white lines and altercations, I am a bit stumped as to why Lewis didn’t get a penalty for clouting Alonso. Consistency doesn’t mean for everyone except Lewis. I’m not picking on him, I had him on the podium for my fantasy GP picks but I find the dichotomy odd and not in keeping with the outrage from fans.

I admit, I’m not entirely sure how Pierre Gasly made it up to P9 but good on him, I’ll have to go back and watch the pit strategy and his race again. Also not sure Zho dropped so much.

After Sunday, I think it’s clear that Nicholas Latifi is enjoying his last season in F1 and that’s unfortunate but I did enjoy the Canadian Battle while it lasted.

So, the technical regulation tweak…has it played itself out and benefitted Red Bull or did Spa just flatter some teams? Time will tell who is struggling but not he surface you might suggest that Ferrari may have had some issues with it. I would argue, as Martin Brundle did, that the compression of Eau Rouge is really what determined ride height so let’s see if they struggle in the upcoming Dutch grand prix. 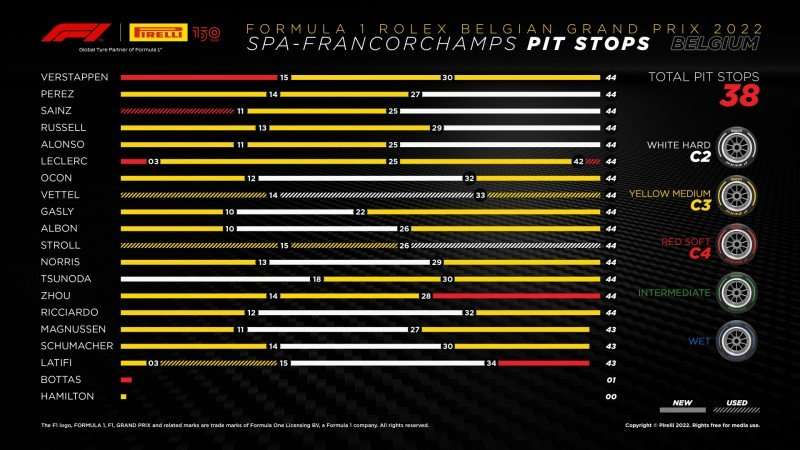 TYRE TALES: HOW THE RACE WAS WON

Owing to grid penalties, Verstappen started the race from 14th on the grid, opting for the P Zero Red soft tyre to make his way rapidly through the field during the opening stages. By lap 12 he had taken the lead, which he held until his first stop on lap 16 for P Zero Yellow medium tyres. Two laps later he was back in the lead, and he was able to make his final pit stop for another set of new mediums, 14 laps from the finish, without losing his advantage. He went on to take his second consecutive win from the midfield after Hungary, where he started 10th on the grid.

Great summary, as usual. I agree Lewis was at fault, regardless of what they say I think the penalties are used to address injustices. The victim continued, the offender’s race was ruined, the stewards were satisfied. But it was at least consistent over the race – Lewis got no penalty, Latifi drifted over and hit Ocon then off the track the other side then across the track into Bottas – no penalty (far more shocking than the Lewis pardon in my opinion), while Perez clearly moved across, squeezed (was it Leclerc?) off the track and contacted him while less than… Read more »

How does Latifi combine slow, dangerous, and boring so effectively? Maldonado and Kvyat could be criticised for turning F1 into a circus but at least one got a circus to watch. For all the carnage Latifi causes he’s somehow not even interesting to have around.

Previous article
F1 boss says no new teams, like Andretti, needed
Next article
Belgian GP Review | Podcast Ep 798
I can't lie, I LOVE SPA! The Belgian GP is one of my favorites and I enjoy it every time we race here. Thankfully it will return next year. Race Report: Verstappen dominates Belgian Grand Prix