The Austrian Grand Prix was set to be a challenging race for Mercedes given the circuit characteristics and thus, Ferrari may find a brief glimmer of hope with pole position secured by Charles Leclerc. Unfortunately, Sebastian Vettel had trouble with his Ferrari in qualifying and started ninth behind the Mercedes duo of Lewis Hamilton and Valtteri Bottas.

As it turned out, Leclerc and Vettel were marking the wrong car this weekend as Max Verstappen, powered by a Honda engine and a biomass of orange-shirted Dutch fans, took his Red Bull car to the top of the podium and won the home race for his Austrian racing team.

At least that’s how the race ended but in the process of taking his win, Max passed Charles on lap 69 with some wheel-touching results as he dove down the inside of Leclerc and pressed the red car wide on exit of the corner. The stewards deliberated for almost two hours after the race to determine if the move was in accordance to the rules and eventually took the decision that no further actions were required.

A huge win for Red Bull and Max Verstappen who won the team’s home grand prix. The slow start that dropped Max to P8 due to his anti-stall kicking in was adversity enough but he charged back through the field on the hard compounds to pass Valtteri Bottas and eventually Leclerc for the win. The victory moves Verstappen into third in the driver’s championship ahead of Vettel. It was also Honda’s first win since 2006.

A win for the FIA who managed not to cause more controversy by reversing the result of a grand prix over a regulation that most fans are becoming frustrated with.

A win for McLaren and Lando Norris’s 6th place finish and once again, best-of-the-rest. A win also for Carlos Sainz who started last and finished in the points for his 8th place result. McLaren’s pace in France was not reduced by the Red Bull Ring track layout and it does lend some credence that they are the legitimate contenders as best-of-the-rest for the balance of the season regardless of track characteristics.

A win for Alfa Romeo’s Kimi Raikkonen and Antonio Giovinazzi who both finished in the points with a 9th and 10th place finish. It was Giovinazzi’s first F1 points finish.

Mercedes had a rough day at the office and to be fair, I wasn’t believing their comments ahead of the race weekend, but they were correct, this track was a challenge for them. The speed they have in the corners against Ferrari was neutered because there were only ten turns and perhaps more difficult than that was the heat and car temps that Lewis and Valtteri had to deal with all day long. For Bottas, he did manage to claw back some points against his teammate so a good result for him. Lewis was about 40s away from being lapped in P5 no less.

A fail for Renault who had a poor home race in France and equaled that with a poor non-points result in Austria. They are now 20 points behind McLaren and one has to wonder if Cyril has the answers. A hint, Cyril, it’s not Nico holding you back.

A fail for Racing Point and Haas F1 who still struggle tire temps and finding the pace they had last season. If there is an upside, it is that Sergio Perez was able to get his Racing Point car ahead of the Renault’s so that’s good.

A WTH moment for the FIA as the world waited two hours to hear if they were going to negate the result because two drivers got aggressive during the race. Calmer heads prevailed but it does bring into question all the previous similar situations that were penalized. As much as I think they made the right decision, I am now questioning why previous penalties were given for similar actions?

A WTH moment for F1.com who were duped and the Driver of the Day award went to last-place finisher, Robert Kubica. If the system was hacked by bots voting or if it was a fan message about the current state of F1, I have no idea but in the end, it’s hilarious. 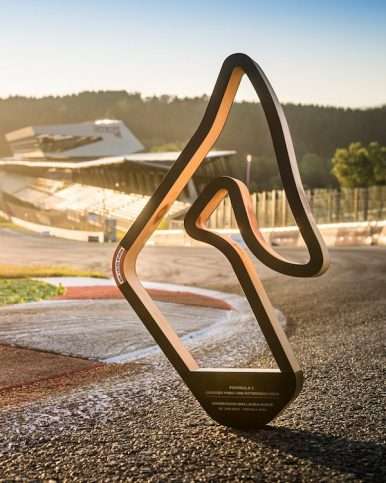 Thank goodness the FIA managed to not screw this up. I thought for sure that they were going to overthink this and do something stupid. Worth noting that the penalties in the previous races all had to do with drivers leaving the track limits. Max stayed firmly within the track limits and so gave the FIA an out; it’s sufficiently different from what Vettel and Ricciardo did that they can let the results stand without looking totally inconsistent. Max delivered the best drive of any driver all season and it would have left a terribly sour taste with the whole… Read more »

It was absurd that they were even reviewing the incident. The stewards should only make judgements on the most egregious incidents. F1 is rapidly turning into preschool where everyone needs to play nice and we have to worry about their feelings, ridiculous.

Fake controversy aside it was the best race of the year.

You missed one, NC. A big thumbs up for Honda! They got their 1st win in 13 years. SkySports should had sent someone down to the McLaren garage for a comment from Zak Brown or talked to Ron Dennis via phone or Skype for a reaction.

I thought I saw the Honda engineer crying on the podium. Finally a win.

I thought the same at first but I believe it was champagne.

Regardless of whether it was legal or not, the simple fact is that it wasn’t a “clean” move. When the the heck is Max going to learn how to pass without being a d*ck about it?

I was rooting for him right up until the point he acted like someone who didn’t have the skills or pace to win and had to resort to cheap shots to get the victory. It was absolutely unnecessary and amateurish.

I’m not a fan of Max (he just irks me) but I really don’t see what the problem was, Charles had plenty of room on the left.
Up until the last couple of years, drivers used to accept that they got passed, ran wide, and got on with it.
Now they’ll bang wheels hoping for the other guy to get a penalty.
A bit like ‘diving’ in football.

There was runoff on the left, but there wasn’t any actual track. My point is that you often hear the commentators talk about the professional driving and “giving the other driver room” – but never with Max. I think he would have pulled off the pass even without forcing LeClerc off, but he never does that — It seems he always uses the ‘dirty trick’ to get things done.

Biggest winners of the season: Carlos and Lando.
Haven’t they just lucked into the right team at the right time.

Can’t have hurt his case that he came out in support of the Stewards after the Vettel/Hamilton incident. I’m sure that this would help make a 50:50 into a 51:49 decision

Sorry took me a while to find the reference.