Ok, so not every Formula 1 race is an action-packed event but the interesting part of the Mexico City Grand Prix was in the strategy and when you read the notes in the margins, you start to view the race as a race of missed opportunities.

Mercedes certainly had pace in Mexico but they were still slightly slower than the Red Bulls so when they positioned both cars on the grid on the same strategy—starting on the Medium compound tires—it seemed like either they missed an opportunity, played the only opportunity they had or had something up their sleeve.

Now, it’s not entirely fair to put too much pressure on Mercedes because in reality, I doubt they thought Red Bull would go Soft, Medium to the end and, like Pirelli, may have thought Max Verstappen might go soft, medium, medium. In the end, Max had plenty of tire to stay out and take his record-breaking 14th win of the season ahead of Lewis Hamilton’s Mercedes and Sergio Perez in the sister Red Bull for a podium finish in Mexico.

A win for Max and Red Bull for taking his 14th win of the 2022 Formula One season. It’s also a win for Sergio Perez who managed to get on the podium for his home race in Mexico City to a throng of adoring fans. Red Bull managed to read to tea leaves of Mercedes strategy and were flexible enough to adjust their own strategy and have it executed flawlessly by Max.

A win for Mercedes who were as competitive as they have been all year and at this altitude, Lewis Hamilton and George Russell kept within earshot of the Red Bulls for most of the day. They were clearly ahead of Ferrari and some thought they have their best chance of winning a race this weekend. Still, a podium finish is a good outing for the team in the extremely capable hands of Lewis Hamilton.

A win for McLaren’s Daniel Ricciardo who has been MIA all season only to punt Yuki Tsunoda off track, gain a penalty and still march through the field like a Roo on fire to claim 7th place ahead of Alpine solidifying their lead as best-of-the-rest in the constructor’s championship. It was a big, big deal for the team and Daniel executed when Lando Norris could not. To be fair, Lando finished in 9th.

It was a fail for Ferrari who were in another postal code as far as performance goes against Red Bull and Mercedes. Perhaps, as Paul tweeted me, they had their engines turned down for survival given the high altitude? Carlos Sainz and Charles Leclerc finished 5th and 6th respectively.

A fail for Alpine who were leading the best-of-the-rest just two races ago but a DNF for Fernando Alonso and Esteban Ocon coming home behind the McLaren of Ricciardo puts a decent gap between them and the team from Woking.

I’m not sure why Mercedes chose the same strategy and started both cars on Softs if I’m honest but I am sure it made sense to them. Easy for me to be critical but even when George was radioing the team to change strategy, they didn’t seem to listen to him much.

I’ll be honest, the spat between Red Bull and Sky Sports F1 is odd. I agree that Ted has gotten more vocal about last year’s championship loss by Lewis Hamilton and perhaps he felt it was long enough ago that it was ok to say that Lewis got “robbed” of that title. But if I’m honest, as a Yankee, Sky has become quite a bit more augered in on all things Lewis and there has been a lot of innuendo and even terse behavior from the crew that we’ve not seen between them and other teams.

Knowing full well that social media has become a full-on dumpster fire, they are feeding it with these dog-whistling comments. The Mexico City Grand Prix is a weekend for Sergio Perez and yet a majority of the pre-race show broadcast was spent talking about Lewis, his idols, Mercedes and their chances to beat Red Bull and more Lewis features and focus.

I’m fine with features on Lewis, he’s a 7-time champ, but at Sergio’s home race? I’ll be blunt, I think F1’s new fanbase loves the young prodigies in the form of Lando Norris, Max Verstappen, Charles Leclerc, Carlos Sainz, Pierre Gasly, Esteban Ocon, Alex Albon and George Russell. I think Lewis’s day and time is waning and Sky is having a hard time letting it go and transitioning to the young guns of F1.

Sure, Lewis has 7M followers on Twitter but the young guns combined have more and the Netflix series, Drive to Survive, has brought the young drivers to a new level of fandom. Prost faced it, Hakkiinen faced it as did Schumacher, Alonso, Raikkonen and Vettel. There is always a changing of the guard, it just seems that Lewis and Sky aren’t ready to make that change.

In the end, can you blame them? Lewis and Sky are still capitalizing on Lewis’s brand and success for good reason, he’s achieved an amazing amount of success both on and off the track. I understand the desire to keep that train rolling, I really do but when the national broadcaster who is also seen around the world makes Red Bull an enemy, we’ve crossed a line from what is supposed to be a relatively objective broadcast crew.

No matter how fervent you are in your feeling that Lewis got “robbed” of his title, there are millions and millions of people who do not agree with that sentiment and when you poke the social media bear and get the mob to storm the Red Bull keep, you’re alienating millions of people amongst the 70 million who watch each race around the world.

In the end, I think Red Bull are raw from the cost cap pile-on that most of the media and teams served up for them for nearly a month and the FIA did very little to put an end to that with their report. Knowing that Sky has become increasingly uncomplimentary to them, I think they should have just ignored it and chosen to be adults and move on. That’s easy to say but if it’s causing sponsor friction and friction with their employees, then I understand the sentiment.

I don’t really have a knife in this fight and I understand both sides but in the end, it leaves me asking, “where are the adults in the room?” 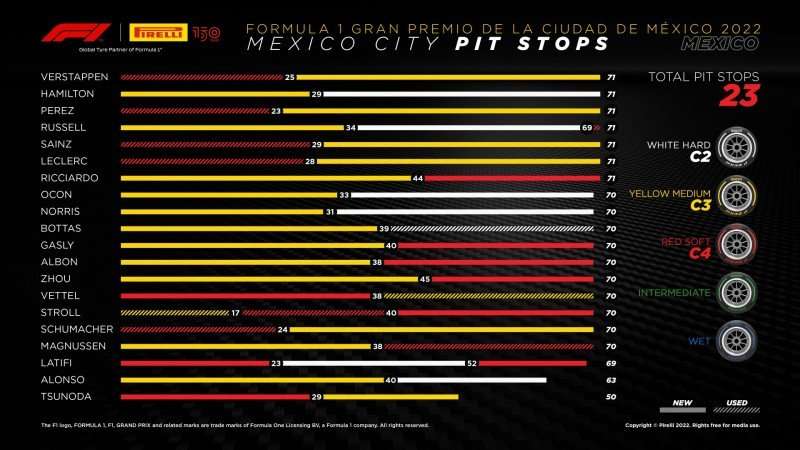 Verstappen chose the P Zero Red soft tyre at the start to lead, before switching to the P Zero Yellow medium tyres on lap 25 and conceding his advantage. He regained the lead once his Mercedes rivals had made their single stops, and from there it was a question of managing his medium tyres to the finish: completing a 46-lap stint on the yellow compound to win by 15 seconds.

With 12 drivers starting on the soft and eight on the medium, there was a big mix of strategies from the start. This was reflected in the key battle between Red Bull and Mercedes, with Mercedes selecting the P Zero White hard tyre for the second stint after an opening stint on the medium. Lewis Hamilton’s second place at the finish equalled his best result of the season set just one week ago in Austin. His team mate George Russell was one of just three drivers to stop twice, putting on the soft tyre at the end to secure an extra championship point for fastest lap on the final tour.

Missed this one due to various reasons although it’s never been the most exciting, however congratulations to the winners.