This past weekend, Rally America hosted the second round of its National Championship series, the Rally in the 100 Acre Wood held in Mark Twain National Forest with Rally HQ stationed in Salem, MO. It’s been a while since I’ve had the pleasurable opportunity to photograph a stage rally. In fact, it’s was three years ago that I worked this same rally back when the event took place on the last weekend of February. A huge Thank You to our rally friends at Open Paddock for the opportunity.

A rally is very different than a circuit race in just about every aspect. There is no single venue in which it happens, there is no singular formula of car, and there’s no dedicated and restricted pit and garage area. Before competition begins each day, there is a Parc Exposé. Think of this as a car show for the rally competitors. Steelville City Park hosted Parc Exposé on Friday. On Saturday, the day’s activities started in downtown Salem. These Parc Exposé sessions are great opportunities for spectators to get close to the cars and talk to the drivers and co-drivers. Many of the competitors are extremely eager to talk about their cars and their sport. Many of the competitors enthusiastically welcomed young kids and invited them to sit in their cars. 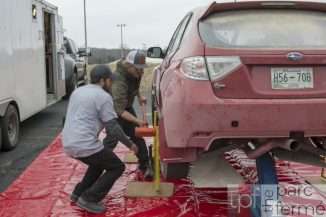 The accessibility doesn’t end there as the Service Parks are also open and accessible to all. Twice per day, the cars that are still mobile come in for service. This is a time for crew to replace tires, brake pads, refill fluid, and affect other repairs as necessary. If things have gone well, then cars are in and set to go back out again in short order. The Rally in the 100 Acre Wood is a difficult rally. It’s hard on both the cars and the competitors. There were many teams on Friday replacing brake lines and doing quick and dirty body work. When you only have 45 minutes to turn around the car, there’s little time for finesse. Crews often do body work with angle grinders and sledge hammers. Trophies are for being fast, not for being pretty.

Spectating a rally is very different from attending a circuit race. You need a well thought out plan for the day. Route maps, time tables, and service breaks are just as much a part of your day as for the competitors. As a photographer trying to document the event and tell the stories that developed, I printed out the schedule and all the stage and area maps and placed them in a three-ring binder ahead of time. Using the area maps and the schedule, I made a plan for each day of what stages I would be able to reach in time. This plan also included time to get to the service park and refuel both the car and its driver in the middle of the day. Planning is critical. Not doing so will lead to one getting to stages late, getting lost, and wasting a lot of gas just driving through the countryside.

The competition was fierce this weekend. Even more challenging than the competition were the conditions of the roads. Winter snow and rain washed most of the fines from the gravel roads leaving only the larger stones. Conditions became worse ass the first drivers passed through. The aggressively tread rally tires uncovered suspension-bending, wheel-breaking rocks that put an end the days of many competitors. The crews were busy in the service areas repairing brake lines, steering racks, and other mechanical ailments. Those teams were the lucky ones as a few teams, including the front-running duo of Joseph Burke and Karen Jankowsky in their newly built Mitsubishi Evo ended up on their side.

For many classes it was a battle of attrition, but drivers with mechanical sympathy for their machines would find their care rewarded. Piotr Fetela and Dominik Jozwiak brought home the overall victory in their Ford Fiesta ST skinned, Mitsubishi Evo powered car. They were fast and smooth all weekend long.

You can see our photos from the 2018 Rally in the 100 Acre Wood on the Parc Fermé Flickr site. If you have a Flickr account, be sure to follow us as we’ll offer up more motorsport photos from the variety of events that the crew here at TPF attend. 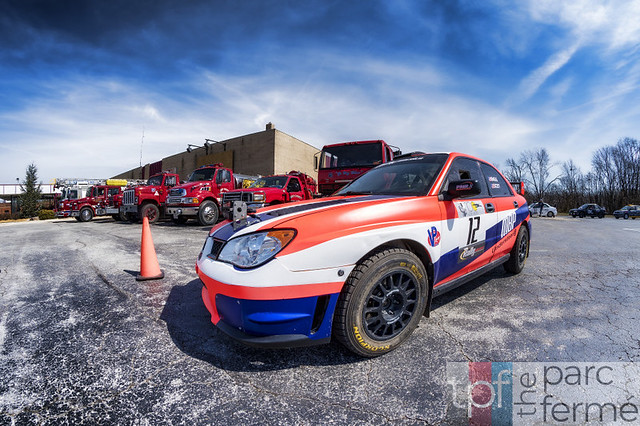