The UK Health and Safety Executive (HSE) carried out an investigation into the testing crash that resulted in Maria de Villota losing her right eye on 3rd July 2012. The investigation concluded last month that no action will be taken against the parties involved.

Under the Freedom of Information Act several news sources have asked for copies of the report, and AUTOSPORT and the BBC have received an extract of the findings. I have not seen this extract, but the two reports above quote several findings in common:

The Spaniard said she could not operate the clutch when the steering was on full lock but was told “it does not matter as there would be no need for full lock during the test”.

She was given notes from the race engineer ahead of the drive, but these did not feature information about stopping the car or “which gears should be selected when arriving at the pit lane”.

A standard trailer, rather than the usual race trailer, was used, and it had an “unusual” and “larger” tail-lift.

De Villota began the day by completing a drive in a saloon car with her race engineer where the programme was explained to her, however the report added the stopping procedure was not discussed.

The Spaniard completed two runs up the runway successfully and on returning to the garage area, with the car travelling at 45 km/h, she braked and the car continued to slow.

As the engine dropped to 4100 rpm and with the gear still engaged, the engine idle control attempted to prevent the speed dropping further in a bid to stop the engine stalling.

“This is the start of the first of three periods of oscillation in the data which show that the car is ‘fighting’ the driver”.

De Villota had “not been provided with any information on how the engine idle control would affect the stopping performance of the car”.

De Villota said in the report that she had pressed the button to unlock the clutch, but it did not work.

The front right wheel locked, with de Villota trying to steer the car to the right. As she braked harder, the front left wheel then locked.

She then attempted to change down from second to first gear, but the change was rejected as the torque was greater than 100Nm.

De Villota eased off the brakes, allowing the wheels to turn, but re-applied the brakes and that caused the left front to lock again.

“the car was pushed along the apron of the runway into the tail-lift of the trailer”.

De Villota had thought that she would miss the lorry and did not see the tail-lift but “the tail-lift had been left in a position which not only created risk of injury, but was also protruding outwards at the level of the deceased persons eye”.

The team was “relying on the skill and experience of the driver”.

As stated above, I have not seen the HSE report and I am by no means an expert in Formula 1 car design. The following is only my opinion, but I believe that several hazards can be identified from what has been reported, and all F1 teams should examine what they can do to mitigate those safety hazards. 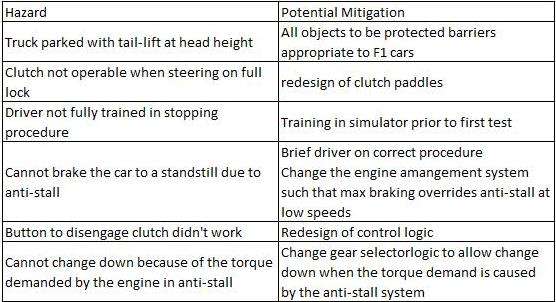 I don’t think that this is what Kimi Räikkönen had in mind when he stated that F1 should become more challenging. These sort of risks can and should be reduced, and hopefully all F1 teams will learn the lessons from this incident so that it is not repeated.