The world of motor sport has history…long history. From the very humble beginnings to current day racing, motor sport has offered its fans some of the most epic battles and characters as any other sport in the world. I mean who can forget Teo Fabi right? In 1976 it offered a legendary battle between British champion James Hunt and Austrian champion Niki Lauda.

The renewed interest in this mega duel was rekindle by Ron Howard’s 2013 movie RUSH which recants the tale with Hollywood dressings but not too much Hollywood. It offered a classic Ron Howard take on story telling (come to think of it, I can’t recall seeing Clint Howard in the movie) with cinematic glitz (given its humble budget) and was well received.

While I enjoyed the movie, I tend to favor Formula 1 documentaries and in the case of Hunt vs. Lauda, the story is so dramatic and epic, it doesn’t need Hollywood treatments to capture and galvanize new and veteran fans of Formula One. Just as the SENNA documentary merely need tell the tale and instantly capture the incredible career and tragic death of one of the best drivers the series has ever had, James Hunt and Niki Lauda also have an incredible history and story to tell.

A new documentary, previously aired on BBC, will be hitting the store shelves this January and we’ve had a rare opportunity to see the film.

The film is called 1976: Hunt v Lauda and it is a straightforward documentary of the 1976 season in which James Hunt was crowned champion and the movie RUSH used as its storyline. 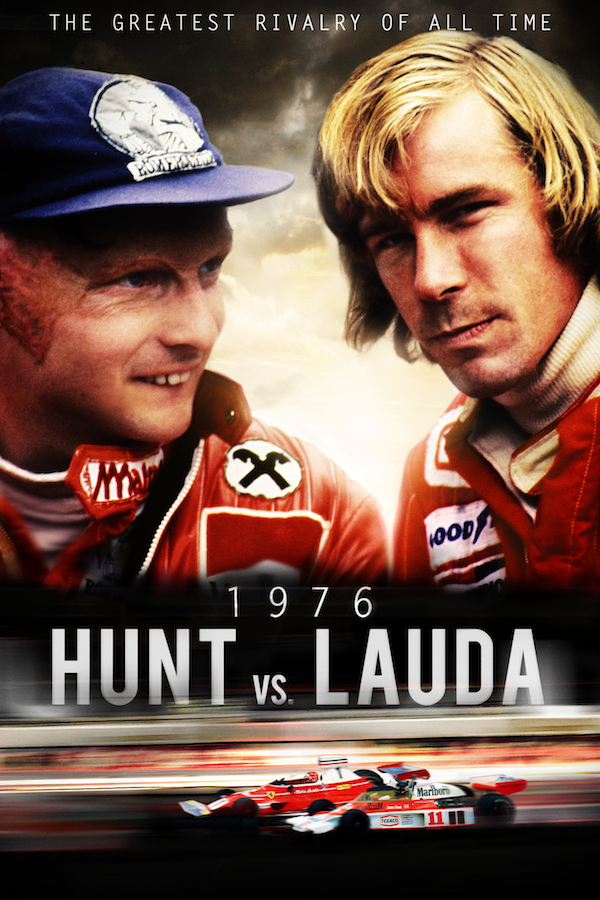 Besides my admitted bias toward documentaries, I really enjoyed this film for many reasons. The most pressing reason is the interviews with Alastair Caldwell (McLaren team boss in 1976) and Daniele Audetto (Ferrari team boss in 1976). These two have such personality, passion and recollection of every detail of that year and their rivalry is clearly still tangibly visible to this day…no, I’m serious, you can tell these guys are no fans of each other and that they still harbor some scars from the 1976 season.

What is most interesting is that the interviews with Niki Lauda are terrific but even Niki, as is his style, doesn’t carry the lingering rivalry that the two team bosses do in the film. It’s fabulous and very telling about how a team takes Formula 1 very seriously. Another reason to never discount what Red Bull are currently doing in the sport because it isn’t just Sebastian Vettel, it’s the team that are working their tails off to make it happen.

The documentary details the season nearly race-by-race and doesn’t get tedious or taxing on your attention span. You move along with the story line by virtue of the compelling commentary of Caldwell and Audetto that keeps you hankering for the next scene.

With rare footage of the races and behind-the-scenes action, the documentary does a nice job of visually keeping you in the game and unlike the cinematic movie, the level of detail begins to unpack the story for you. Shots of the British crowd staging a hand-clapping revolution and mob mentality is video I had not seen before prompting Caldwell, an Englishman, to call it, “not very British” as he laughed about the event.

The documentary wraps up very quickly after the title was won and if I have a criticism it would be that the film could have let the viewer make a tad softer landing from the emotionally charged height the director created. Perhaps a little post 1976 career unpacking might have been good but that’s nitpicking really.

Overall, I found the documentary by producer Mathew Whiteman to be a very enjoyable piece with masterful commentary offered by Peter Windsor (as usual) and Simon Taylor (the pro that he is). If you enjoyed the movie RUSH, then you owe it to yourself to get this DVD to help fill in the gaps and give you a much better appreciation of what really happened. If you are a veteran of the sport, you’ll love the new footage and hearing the tale again as well as the team boss commentary.

The movie will be release on January 7, 2014 and you can pre-order it from Amazon right here.