The final day of this test saw both Spanish drivers go off in the long third corer of the Catalunya circuit with sufficient force to reach the barriers. Of the two incidents, Carlos Sainz appeared to do more damage to the Toro Rosso, but it was the earlier incident for Fernando Alonso which caused more concern to observers. The impact was sufficient to require a trip not only to the circuit’s medical facility, but also a helicopter trip to the local hospital for a precautionary check up. The CT scan revealed Alonso was unharmed, and although pictures of the car did not appear to show significant damage, McLaren decided not to continue into the afternoon. Jenson Button had been due to take over in the afternoon to even out the mileage covered by the teams two drivers, but the incident prevented any running at all today for the British driver. McLaren will need a clear run in the final pre-season test to be ready for the start of the season in three weeks time.

The fastest times and total laps covered today are shown below:

Romain Grosjean again put Lotus at the top of the table with a run on Super Soft tyres, these were also used by Felipe Nasr and Carlos Sainz to set their 4th and 6th fastest times. Far more impressive was Nico Rosberg’s second fastest time as this was set on the Medium compound which is reckoned by Pirelli to be anything up to two seconds slower than their softest compound. Alonso was the only other driver to set his fastest time on the Medium compound, but I suspect McLaren have other things to worry about rather than outright speed. The remaining four drivers set their times on the Soft compound tyres.

Several drivers attempted race distance runs, but there were enough red flags today that all these were interrupted so it is hard to compare these directly. Times in the 1:29’s were highlighted for some of these race stints on Hard tyres (this some way off Hamilton’s times set for a similar stint on Day 2). The afternoon red flags were caused by Bottas, Hülkenberg (with a terminal engine failure) and Nasr in the final ten minutes. The Force India failure while being a rare occurrence for a Mercedes power unit, may not give the other teams much cause for joy. Reports of the noise from the cars by those at the track indicate that the 2015 power units are louder than their predecessors, and that Force India was much quieter than the other Mercedes runners. It is likely therefore that as the cars was last year’s so was the power unit.

The distance covered by each team through this test is shown in the graph below: 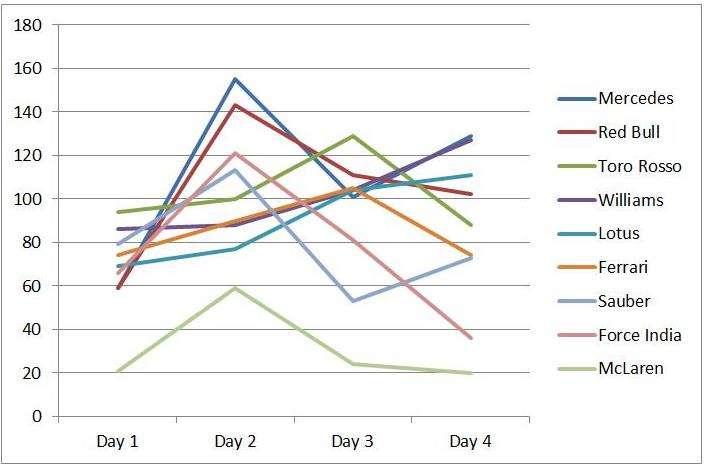 This clearly shows just how far Honda are behind the other power unit manufacturers in terms of reliability, but also indicates that Renault have managed to overcome the issue that hampered their running on the first pre-season test at Jerez.

While I maintain that the outright fastest time each day have far less meaning than the cars performance on long runs, some have asked for a comparison across the total test. This is shown below. 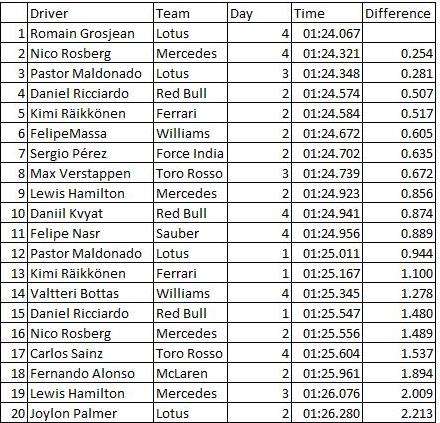 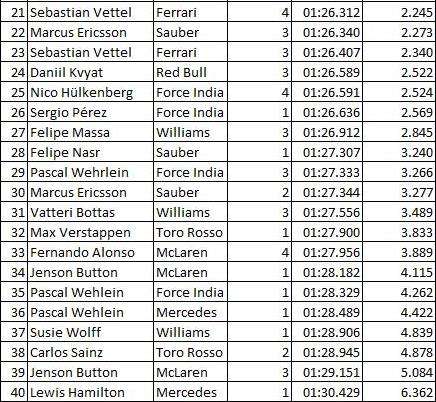 This table also shows that the times improved as the test progressed, this may be due to teams sorting the cars but is also likely to be helped by the track condition improving as more rubber is laid on the circuit. It will be interesting to see if this improvement continues when the teams return next week.