As testing resumes this week it isn’t possible to directly compare with what happened this times last year (the second and third pre-season tests were held in Bahrain in 2014). However as a current Grand Prix circuit it is possible to compare times with those recorded at last seasons race weekend. For comparison Pole was set by Lewis Hamilton at 1:25.232 while the fastest race lap (Hamilton again) was a 1:28.918. The tyres used for the race weekend were the Hard and Medium compounds, useful when comparing the fastest time from this pre-season test which will most likely be set on softer tyres.

Another comparator is the in-season test which was held in the week following the Grand Prix, where the fastest time was set by Pastor Maldonado in the Lotus at 1:24.871 using Super Soft tyres on the second day of the two day test. To confirm that testing times mean very little, the fastest on day one was Max Chilton in the Marussia at 1:26.434 (also on Super Soft tyres). With the best will in the world it is hard to see that Marussia were anywhere near being the fastest car during that test, it is just that they chose to concentrate on single lap pace while other teams were working through a different programme.

As the Force India used at this test is the 2014 car (possibly even with the 2014 Mercedes power unit, as one of the reasons given by the team for not going to Jeez was they couldn’t fit this year’s unit into last year’s car), it is worthwhile noting that the fastest qualifying time by the team was Nico Hülkenberg’s 1:27.685 to start 11th, while the fastest race lap was from Sergio Pérez at 1:30.756.

The testing today saw a more successful day for all the teams, with every team completing more laps than they managed yesterday. There were only three red flags through the day (a brief pause in the morning when Ricciardo stopped in the pit-lane and needed to be wheeled back to his garage, a pause in the afternoon while Sainz was recovered from his off into a gravel trap and the final pause when Ericsson was asked to stop on the start finish straight in the last half hour of the day. An improvement over yesterday was the lack of collisions between cars. However there were still ten drivers recording times as although Nico Rosberg was well enough to do 66 laps in the morning, he was replaced in the afternoon by a recovered Lewis Hamilton to give his neck time to heal properly. The times and distances covered were: 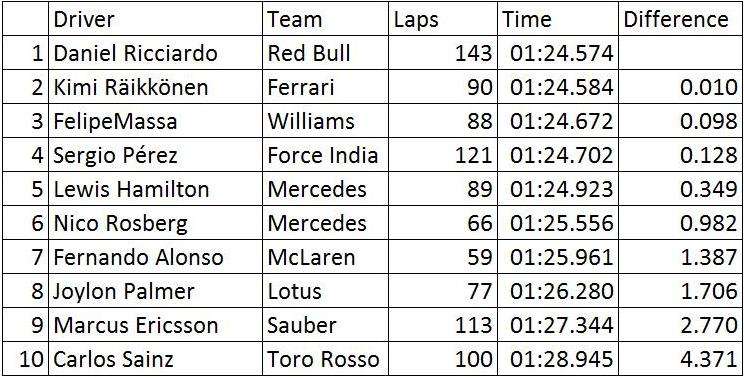 Comparing the medium tyre time to Force India’s qualifying time from 2014, it would appear that the car is 1.2 seconds faster. Now this could be due to the in-season development of the car last year (remember this is the 2014 Force India), or it may be that the track is in better condition after one day of pre-season testing than it was after free practice on the race weekend. It does however give a baseline to use if we are going to try and compare the other teams lap times with what they achieved last year at this circuit. By the end of last season, Force India was ahead of only Sauber, Lotus and Caterham, and 1.8 seconds away from the Mercedes in qualifying for the final race of the year. It is unrealistic to think that this is then the fourth fastest car and a quarter of a second faster than this year’s Mercedes.

A more realistic impression can be gained if we look at some of the longer runs. Both Hamilton and Ricciardo spent much of the afternoon doing longer runs. In both cases I am making assumptions based on sporadic laptimes reported by AUTOSPORT during their live coverage. Professional journalists actually at the test will have access to every lap time recorded, and will be in a much better position to give detailed analysis.

From my reading of Hamilton’s run in the afternoon, it looked like he was running a full race simulation, He did a run totalling 66 laps (the full race distance at Barcelona) stopping twince for new tyres. It is unfortunate that the second stint of this run was halted early on by the Red Flag for Sainz’s incident, but Hamilton resumed within minutes of the track going green. Each stint appeared to be on the Hard tyres, and the lap times that were reported are:

This compares very favourably with his race times from 2014 reported above, with the times appearing to be of the order of two seconds faster than in last season’s race. It should be noted that with the stoppage for the Red Flag early in the second stint, it is possible that the tyres were replaced, and / or fuel was added which would alter the relevance of the times.

Daniel Ricciardo did a series of long stints, while he didn’t appear to run a complete race simulation and there was quite a long gap between the second and third stint, the times reported were:

While the second stint compares with Hamilton, it was noted that the Red Bull was on the Medium tyre (for the last two stints at least) while the Mercedes was on the theoretically slower Hard tyre for all three stints.

Without similar data for all the teams it is difficult to compare where they really stand, and all we are left with is the headline times which can give very misleading information.

Not in any order: N Lauda M Schumacher A Senna…