Day three at Barcelona was more overcast than the first two, and a few spots of rain fell just before the lunch break. This served to make the track somewhat slower than yesterday, and limited running for some teams as those concentrating on performance testing were less willing to go out when the track was slower.

Sauber had a gearbox problem which prevented them running in the morning, but towards the end of the day Marcus Ericsson was able to put in a trademark Sauber quick lap to end up fourth overall in the timesheets. Just ahead was Lewis Hamilton who unlike those around him in the table used Medium tyres for his fastest runs. Hamilton was the only one of the three World Champions running today not to cause a red flag.

Sebastian Vettel had an embarrassing spin on the first lap of the day on cold tyres, while Jenson Button stopped after only seven laps with a reoccurrence of the MGU seal problem that had stopped McLaren running on the first day of the test. Despite Honda redesigning the part it failed in the same way and needs a further redesign. This is the first repeat failure McLaren/Honda have had in testing, and despite completing far fewer laps than any other team so far this winter (even Force India who weren’t at Jerez at all have gone further than McLaren in both tests to date – 1,247.5km for Force India against 833.9km for McLaren), they are still ahead of where Red Bull were last year (who had only completed 720.8km at the end of the second test).   Although once Button recommenced testing late in the day he was obliged to run with reduced power (not being able to use the full potential of the MGU-K).

Mercedes, Red Bull and Force India also completed fewer laps today than yesterday. The teams had no apparent problems and perhaps had reduced mileage due to the drizzle around midday. Both Williams race drivers were in action today, although most of Valtteri Bottas’ laps were single laps for pit stop practice, and he only completed a flying lap late in the day.

Daniil Kvyat appeared to start a race simulation in the afternoon, and while he did complete the 66 lap distance with four pit stops (using Soft and Medium compound tyres), it was interrupted by a stay in the garage after the second stint. As a result it may not be a truly representative race simulation (and the tyre compounds won’t be those used come May for the Grand Prix).   The first stint of ten laps on Soft tyres averaged 1:31.7 (varying from 1:30.791 to mid 1:32). The second stint on Medium tyres saw laps from mid 1:29 falling to mid 1:31 after 12 laps and to 1:32 by the end of the stint (23 laps). Kvyat then had a 25 minute break in the garage before finishing off the race distance, this was another Medium tyre stint with similar times as before followed by a further Soft tyre stint. This last effort (presumably on low fuel) saw consecutive laps of 1:28.0, 1:27.5 & 1:27.8, and continued for 12 laps to complete the race distance. This is somewhat slower than the simulation Hamilton completed yesterday, but it is possible that the team topped up the car for the last half of the race distance.

Max Verstappen ended up second in the time sheets after setting a time on Super Soft tyres in the morning, while Pastor Maldonado waited until conditions improved in the mid-afternoon (after the slight drizzle) before also using the Super Soft compound to set the days fastest time, Lotus being one of only three teams (joining Toro Rosso and Sauber) who went faster today than yesterday.

Times and distance covered today are: 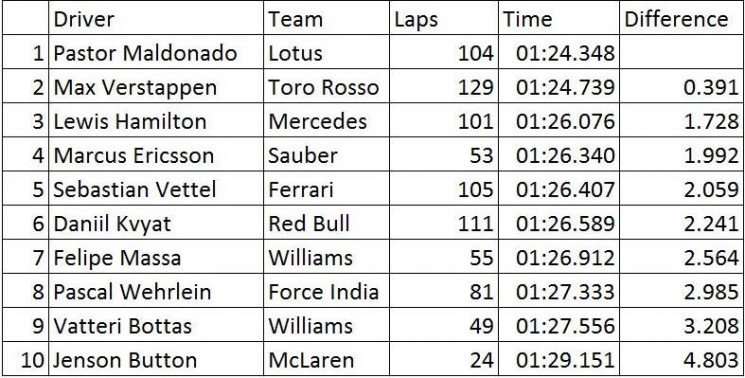