Then and Now – Land Speed Record

Virtually since the first wheeled vehicle was built, their owners have been trying to prove that theirs was the fastest. The land speed record is the highest speed achieved by a wheeled vehicle on land. There is no single body for the verification and regulation, but in practice the FIA Category C (Special Vehicle) flying start regulations are used. The record is the speed over a fixed length (usually a measured mile, but sometimes a kilometre), averaged over two passes. These two passes must be in opposite directions (to remove any advantage of a tail wind) and carried out within an hour. A new record must exceed the previous one by at least one percent to be validated. Class records exist for other classes of car, and there are separate classes for motorcycles.

The internal combustion engine made its first appearance as a record holder on 5 August 1902 when the American William K Vanderbilt took the record to 76 mph. A year and a half later Henry Ford used a 18.9 litre four cylinder engine to power his way to 91 mph, although this record wasn’t recognised by the ACF (the then governing body who had verified all other records, but it was the first time the record had been set outside of France). Through 1904 the record was broken numerous times with Gobron Brillié becoming the first person to exceed 100 mph by going 103 mph in July that year. On 26 January 1906 by taking his steam powered car to 121 mph, Fred Marriot exceeded the contemporary rail speed record for the first time. This record for steam powered vehicles remained until 25 August 2009.

These early records were all set by the car making a single pass in one direction, but in 1914 the rules changed, and the first 2 way record was set at Brooklands in June of that year by L G Homestead at 124 mph.

In February 1919 Ralph de Plama took the record up to 149 mph, although this record was not recognised in Europe. Through the 1920s and 1930s there were many record attempts with huge improvements in speeds. British drivers Kenelm Lee Guinness, Malcolm Campbell, Ernest A D Eldridge, Henry Seagrave, J G Parry-Thomas, George E T Eyston and John Cobb taking and retaking the record, with only occasional interruptions from René Thomas (France) and Ray Keech (USA).  The last record set in Europe was Malcolm Cambell exceeding 174 mph at Pendine sands in Wales. The greater speeds needed larger expanses of flat ground, and so record attempts moved first to Daytona Beach (276 mph in 1935, Malcolm Campell being the fastest) and then Bonneville Salt Flats, John Cobb reaching 367 mph over the measured mile in 1939.

Following the second World War, Cobb returned to Bonneville and managed to take the record to 394 mph (with the first one way run over 400 mph) in September 1947. Nothing much then happened until the 1960s when another great battle took place, this time it was American drivers (Craig Breedlove, Tom Green and Art Arfons) who took the record. Donald Campell tried with Bluebird to retake his father’s record, but by the time he exceeded 400 mph in July 1964 ( at 403.10 mph the fastest wheel driven car) Craig Breedlove had already exceeded 407 mph, but using a vehicle with three wheels and jet powered caused controversy.   During 1964 several four wheeled jet powered cars went faster, and eventually in December of 1964 the FIA and FIM agreed that the absolute land speed record would be held by the fastest vehicle running on wheels, whether wheel driven or not. Craig Breedlove holds the distinction of being the first man to break 400, 500 and 600 mph and by November 1965 the record stood at 600.601 mph over the measured mile.

In October 1970 another American, Gary Gabelich used his rocket powered blue flame to exceed 1000 km/h and set a new land speed record of 622.407 mph. At the end of that decade (December 1979) Stan Barrett claimed to have broken the sound barrier, but this was a one way run, and used radar to measure an instantaneous speed rather than the average over a measured mile or kilometre. It is not officially recognised.

It wasn’t until the 1980’s that Richard Noble started his quest to return the land speed record to Britain. After crashing his first car, he rebuilt it and with Thrust 2 managed 633.468 mph over the measured mile in October 1983. Noble much like his predecessors cannot leave the land speed record alone, and lead a team to break the sound barrier, with Andy Green driving, Thrust SSC first took the record to 714 mph before breaking the sound barrier with a run of 763.035 mph in October 1997 (fifty years and a day after Chuck Yeager first supersonic flight).

Now Richard Noble and Andy Green are back with their Bloodhound project, attempting to break 1000 mph. However this time it doesn’t look like they are alone, several teams are at various stages of preparation for record attempts, and we could be on the verge of another great competitive period like the 1920s, 1930s or 1960s.   The potential competitors are:

As can be seen from the graphic below (courtesy of Flock and Siemens), the greatest improvements in the record have followed these periods of intense competition between different teams. With Bloodhound due to run for the first time this year, this will be an interesting time for the land speed record. 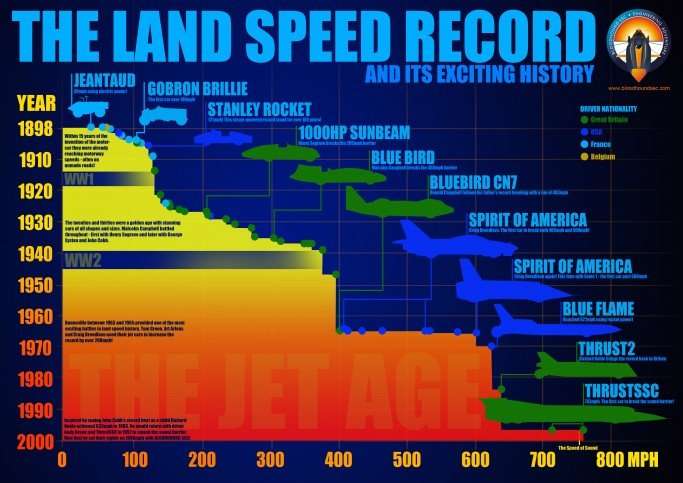 Previous article
Grosjean: Key to 2015? Completely change driving style
Next article
German GP at Hockenheim…James May will be happy