Todd has already written about the fastest times and total mileage covered in testing here.   While it is true that Mercedes once again covered the greatest distance, a comparison with 2016 shows that they did fewer laps than last year.  This is in common with most of the teams, see the table below comparing the total distance covered in testing in 2017, 2016 and 2015.

Only three teams managed to improve on the distance covered from last year:

The number of laps each team completed in the first test is shown in the graph below: 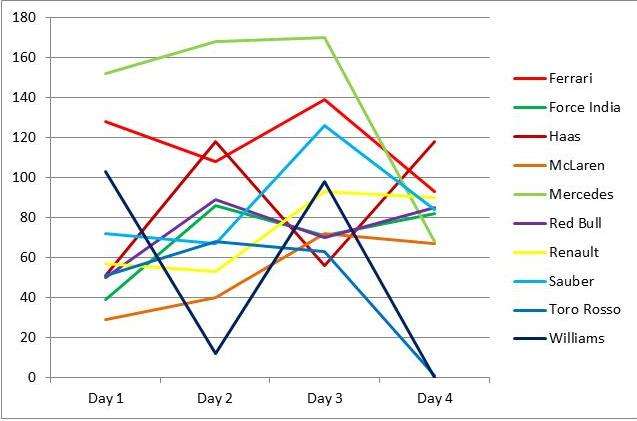 This highlights that both Williams and Toro Rosso did not run on the final day of the first test (due to car damage in Williams case and car problems for Toro Rosso), also that the Mercedes team ran for a much shorter distance on the final day.  In fact most teams reduced the distance on the fourth day compared to the third because of the track being wet for the Pirelli wet tyre testing.

The other notable feature is the drop off in distance Williams suffered thanks to Lance Stroll damaging the car when they had insufficient spares to repair it.  McLaren although starting poorly, looked to be getting steadily more reliable through this test.

A similar graph for the second four days of testing is shown below: 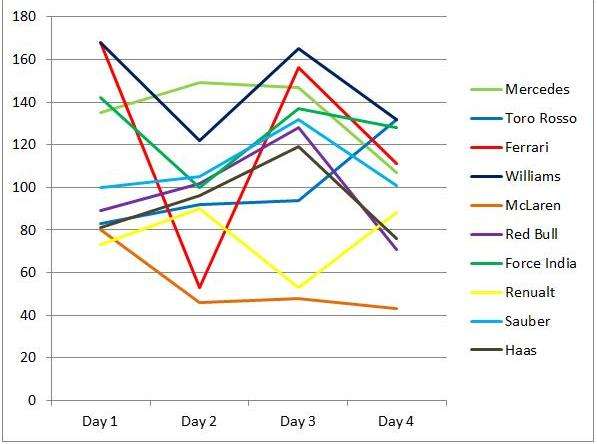 This time the McLaren reliability is getting worse as the test progresses, unsurprising then that they completed the fewest laps over the eight days of testing.  Toro Rosso were getting better through this test, but missing a day in the first test really harmed their overall distance which meant they had the largest drop off in distance covered from 2016 to 2017.

The graph also shows that Ferrari also problems on the second day of the test, so they too suffered reliability problems.  Also most teams did fewer laps on the final day than they had done previously, whether this indicates that they had achieved their programmes, or perhaps the number of red flags on that day was greater than the earlier tests isn’t clear from this data.

Why the reliability of the cars should be so much worse this year than last isn’t immediately clear.  The changes to the aerodynamic regulations should have meant the teams wanted to test more not less so they can fully validate the numbers they are getting from the wind tunnel and CFD models.  At the start of this regulation period there will be a lot of development as teams discover what the opposition has done, it is important to know the data they get from their simulations will translate to performance on the track.

The conclusion that I draw is that with every manufacturer taking the opportunity of the removal of the token system to completely redesign their power unit, the reliability of all except the Ferrari has suffered somewhat.  This may become significant towards the end of the season, especially as drivers can no longer stockpile power unit elements for future use.

Not being at the circuit, the data I have on lap times is limited to the best individual lap each driver recorded on the day.  The graph of these best lap times per day for each team is shown below: 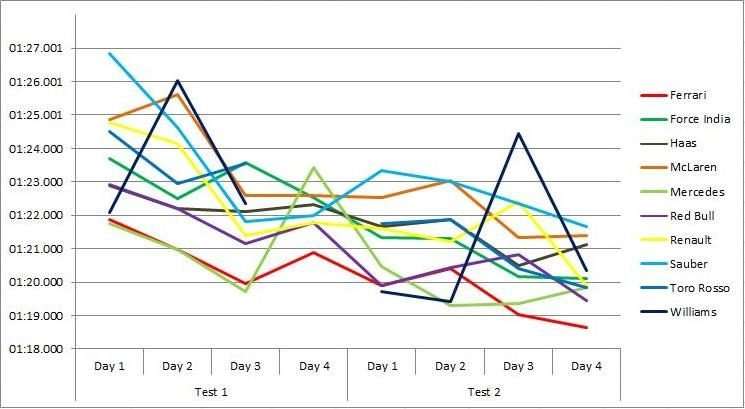 This shows as expected a steady improvement of the lap times as the testing progressed.  Day four of the first test the times slowed thanks to the circuit being artificially soaked for the wet tyre testing.  Williams seemed to concentrate exclusively on long runs on day three of the second test, with their best time noticeably slower than the previous day.  This was set on a harder tyre (Medium compared to Ultra Soft) so hopefully the time difference isn’t all due to preserving the tyres for the duration of the stint.  There are gaps in the Williams and Toro Rosso graphs as neither team ran on the final day of the first test.

Ferrari has certainly come out on top of what Ron Dennis used to call the winter world championship.  This is nothing unusual, but reports from those at the circuit report the red cars looking far more stable and controllable than the closest opposition (Mercedes).  On day three of the second test, Sebastian Vettel noticeably backed off on the straight before he crossed the timing line of his best lap, and on day four Kimi Räikkönen said there was more time in the car after he set the fastest lap of testing overall.  It could be that Ferrari are in a much better position than Mercedes and will dominate this season, or it could be that Ferrari managed to get the tyres into their optimum operating temperature during testing while Mercedes did not.  The temperatures were much cooler in testing than they will be at most of the Grands Prix, so maybe Mercedes will get the tyres to work better under those conditions.  Last year Mercedes ran the test using the harder compound tyres than the opposition (Mediums being the softest at the first test, and Soft at the second).  This year they were using Ultra Softs like everyone else.  Perhaps Mercedes will have a problem getting heat in the tyres (especially if they have to do a standing restart on wet tyres), or maybe Ferrari will put too much energy into their tyres in normal race temperatures?

Red Bull rarely showed their hand in outright lap times, but the time on day one of the second test could show that they may be competitive with Ferrari.  Williams on a couple of occasions were fast, but not consistently so.  Their testing programme was certainly interrupted in the first test, so this may explain why there were doing things differently to the other teams.

Looking at how the times improved over last year, in the first test is shown in this table:

It looks like Mercedes have made a missive leap over everyone else being over five seconds faster than last year.  However the tyres used in the different years and the fact that they were nowhere near their absolute pace in the first test in 2016 is why that improvement looks so much better than everyone else’s.

A similar table for the second test is shown below:

Here the improvements in lap time are more consistent than in the first test and show that these rules while not improving lap times by five seconds for everyone, did get about a four second improvement.  Red Bulls apparent 4.989 second improvement is because they did not run as fast in the second test in 2016 as they did in the first.  Sauber made the least improvement at just over three seconds, but they are the only team running the same Power Unit as last year.  So maybe the chassis regulation changes (bigger wings, wider tyres etc) are worth around three seconds, and the redeveloped Power Units are worth around a second?

You are a genius with a spreadsheet and graph, Dave. Great post thanks. I had forgotten that Ferrari ran the fastest times in testing last year, probably because I was stunned by the huge number of laps Mercedes ran ‘a whole seasons race distance’ over the two tests I seem to recall. So with that in mind, plus your caution about the lower track temperatures meaning the performance on the different tyre types might not be representative, maybe Ferrari’s parity with Mercedes isn’t as certain as I was thinking. In terms of test distance, Sauber, Renault and Toro Rosso look… Read more »

I think the reluctance of teams and drivers to test in the wet on day four of the first test had a bigger impact than any driver fatigue. The other effect was the reduced reliability thanks to the redesigned power units, with every manufacturer suffering some problems.

“reduced reliability” was only suffered by two out of the four manufacturers power units.
the biggest reluctance to test in the wet was that of Lulu and his team.
both FERRARI drivers shown the least “driver fatigue” of all of those on the grid.

Only Ferrari, Haas and Force India managed to cover more distance in 2017 than in 2016. So I would say at least three of the four manufacturers had reduced reliability.
Ferrari did few laps on the second day of the second test (just 53) thanks to the damage caused by Raikkonen’s off in the morning. Whether this off was caused by driver error or car failure I don’t know. This was the one weak point in Ferrari’s test. While Mercedes may have covered more laps than Ferrari, they also had more problems.

Previous articleWhat did we learn from both F1 tests?
Next articleIndyCar — David beats Goliath on the Streets of St. Petersburg