With a speed of 218.896mph, Will Power has taken his second pole position of the 2014 IndyCar season and his second straight at Texas Motor Speedway. Josef Newgarden of Sara Fisher/Harman Racing was just over two tenths and more than a mile an hour slower to finish the qualifying in 2nd, the highest oval start of his young IndyCar career.

Helio Castroneves, who currently lies 2nd in the series championship points behind his teammate, could do no better than 14th, two places behind Indy 500 winner and 3rd place driver Ryan Hunter-Reay. But despite their midpack starting positions, working through the field may indeed be a possibility for the two drivers who are closest to hunting down Power for the championship points lead.

When the aero is wrong on the one and a half mile Texas oval, it is all but impossible for cars to run close to one another. Similar to the aero package used at TMS two years ago, IndyCar has taken steps to keep last year’s race, in which there was indeed little passing, from being repeated. 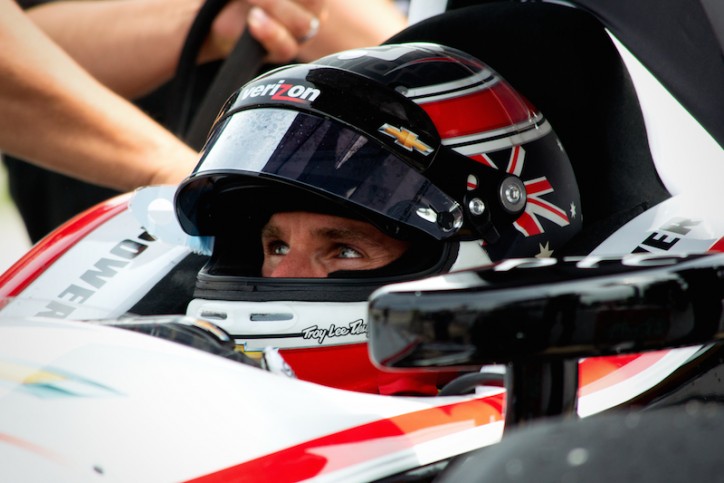 This year, the teams are allowed to run at a zero degree angle on the rear wing, which will produce an extra 300 pounds of downforce . Last year, the maximum that the teams were allowed to run was -5 degrees. Though tire degradation is still expected to be high, the cars should run slightly slower and therefore suffer a slower tire wear rate than in 2013. In fact, Will Power’s pole this year is in fact slower than last year’s…by 0.06 seconds.

One issue that most of the drivers experienced during qualifying was a significantly slower second lap due to the handling going away very quickly, which may not be a good omen for the race itself. As the pole winner described it, his Chevy powered Team Penske car became, “Pushy loose.” Jason Wilson expects that, during the event tomorrow night, the balance will not just change three or four times during the race, but three or four times per stint. If that ends up being the case, it will surely be a very long six-hundred kilometers for any team and driver that does not get the set up just right.