Amid all of the fun and frivolity of the FIA “Prize giving” ceremony, we typically just call those award ceremonies here in the US, there was also time for some tolled up sleeves and hard work by the people in the picture below.

Yes, the FIA were busy making a few decision about the new group and regulatory procedure behind the new cost cap set for 2021. They also were trying to put their foot on the neck of digital motorsport.

I read a lot of press releases and statement in and around the world of motorsport and I thought I would create a new post format that simply highlights what I see when I redline the statements I read. What catches my eye and what may intrigue you as well. 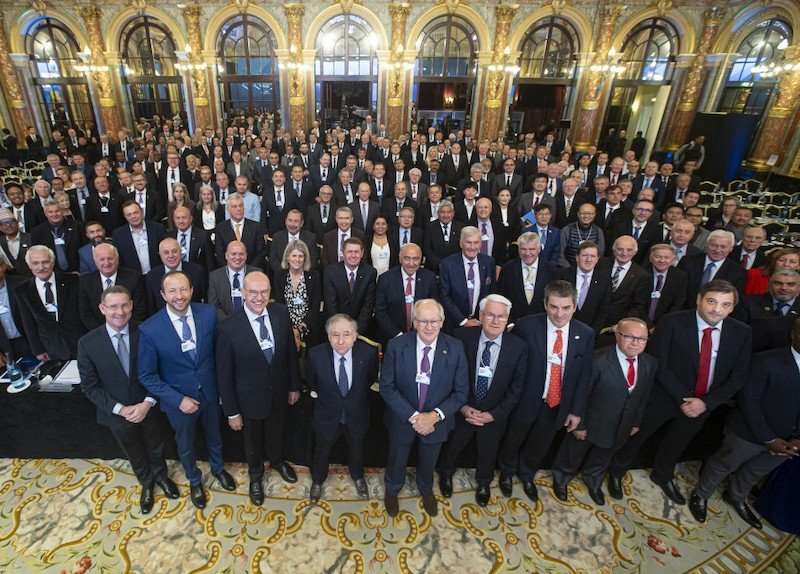 Opening the Assembly, FIA President Jean Todt highlighted the way in which the Federation is growing on a global scale, with interest from new member clubs, and a push to improve diversity in sport.

The Federation’s ongoing efforts to improve grassroots access to motorsport have been boosted by the CrossCar programme, while the Girls on Track initiative is creating new racing fans and finding untapped female talent.

On a global level, the FIA’s member clubs have joined the Federation’s world championships to work towards a planet-friendly future for sport and mobility alike, with a focus on electric racing, greener fuels, and Smart Cities developed with all road users in mind.

Negative Camber
So the main focus of Formula 1’s governing body is electric racing, greener fuels and smart cities? I was hoping we could start with something simpler like better racing.

Amendments to the FIA Statutes

The 2021 Formula One Financial Regulations require, for their full implementation, that the FIA Statutes be amended.

Consequently, the Assembly approved a number of amendments to the FIA Statutes relating to the creation of a Cost Cap Adjudication Panel (CCAP), that would be competent in the first instance in all disciplinary matters relating to the FIA Formula One Financial Regulations, within the structure of the FIA and to the election by the General Assembly of the members of the CCAP. Candidates will be proposed by the FIA Sport Members entitled to vote and by any group of five competitors of the FIA Formula One World Championship.

Negative Camber
This is an important and powerful role they have just announced and one suspects Ross Brawn had his input as well. This is a very politically powerful role in the cost cap process having the ability to see team financials. It would be interesting to know what the teams think about this new group.

Additionally, the Assembly agreed to the following amendments to the FIA Statutes:

Negative Camber
This is an interesting move as it either suggests the FIA is intrigued by or threatened by the advancing digital motorsport business and they are trying to position themselves as the regulatory body of all digital racing.

In order to implement the 2021 Formula One Financial Regulations the Judicial and Disciplinary Rules (JDR) were amended to include the addition of new provisions on the jurisdiction of the International Court of Appeal (ICA) to hear appeals against decisions of the Cost Cap Adjudication Panel.

The term of office of 18 judges of the IT and ICA ends on 31 December 2019. The Assembly therefore proceeded to the election of the following:

The Assembly agreed to several amendments to the International Sporting Code, including the following:

Negative Camber
What we are seeing here is the removal of any of the cost cap regulation oversight or responsibility in regards to enforcement and punishment from the race stewards. It is all being placed in the hands of the cost cap group and adjudication court.

1. So, this first part is probably pandering to the eco-friendlies out there. May or may not have anything to do with racing, but there’s political points to be scored. 2. I’d lean toward intrigued by the new “digital” aspect I’m going to assume that the FIA is going to hire some folks who are tech-savvy, but if it’s going to be regulated, who better than the FIA to deal with the subject. 3. This looks like putting in the mechanism to handle the cost cap procedures. At least they’ve figured out something. 4. Quite frankly, I’d rather have hired… Read more »

I find the new cost cap tribunal a bit concerning and I also find the digital motorsport very interesting. The FIA may be looking to play a role as the regulatory body for it but the people that are making the digital products and hosting the events can manage their own. I am just curious if they will see the FIA as adding legitimacy to their programs or how this will play out.