The first three races of the 2015 Cooper Tires Winterfest for the Mazda Road to Indy’s Cooper Tires USF2000 Series powered by Mazda and the Pro Mazda Championship presented by Cooper Tires were contested at the NOLA Motorsports Park in Avondale, LA just outside of New Orleans last week. Day One of the two-day activities at NOLA included a practice session, qualifying, and Race #1. (Read our recap of the USF2000 action during Day One) Day Two included a morning warm-up session and Races #2 and #3.

Jacob Eidson, a veteran USF2000 driver for Pabst Racing, started Race #2 on Friday from P2 in spite of his setting the fastest race lap in Race #1. His best time in Race #1, though wasn’t faster than Cape Motorsport with Wayne Taylor Racing driver Nico Jamin’s 2nd fastest qualifying lap from the pre-Race #1 qualifying session. I know it’s a weird qualifying scheme, fastest previous race lap or second-fastest qualifying lap, but it works. Starting behind Nico and Jacob were Nico’s teammate Aaron Telitz and John Cummiskey Racing rookie Anthony Martin. The real story of Race #2, though, wasn’t to be found in the front two rows. You have to go all the way back to Row 4 to find Afterburner Autosport’s Victor Franzoni, who started in P7 after electrical gremlins thwarted his initial qualifying efforts, to find the real star of the show. Victor executed a meteoric charge through the field in the first lap, and eventually overtaking Nico for the lead on Lap 3. Once in the lead, Victor never looked back, leaving Nico to finish 2.8 seconds behind Franzoni.

For Race #3, Nico and Jake started on the front row as they did in Race #2, but thanks to Victor’s great drive in Race #2, he would move up to start on the inside of Row 2 in P3 alongside Aaron Telitz in P4. Repeating his brilliant performance, Victor quickly sprang to the front of the pack again. He dominated Race #3 and lead flag-to-flag. That triumph was short-lived, however, as his car failed to pass post-race tech inspection and his car was disqualified.

“I’m happy with the results from this week. The Pabst team worked really hard to make sure the car was as good as it could be, so my hat’s off to them. Between qualifying and Race One, I had a clutch issue. They were able to take the car from one piece to two pieces, put in a new clutch and put it back together in less than 35 minutes. Not many people know how hard they worked to make sure the car was back and running for race one! We had some good races, especially the third race today – I spent most of the race trying to get around Nico (Jamin) and got him with just a few minutes left in the race. I’m not sure exactly what happened, we were racing wheel to wheel and I was in front of him. But that’s racing. I was very happy to be consistently running up front and I hope we can keep it going at Barber.” — Jacob Eidson, #22 Pabst Racing 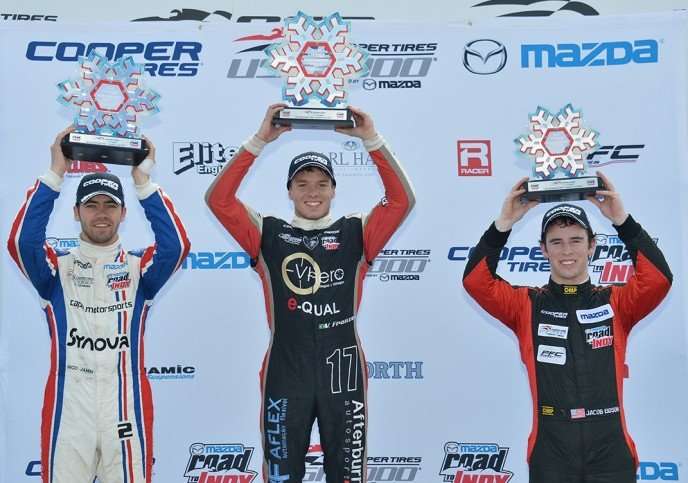 This handed the victory to Jacob, giving him the lead in the 6-race mini-series with 87 points, leading Aaron Telitz and rookie Jordan Lloyd of John Cummiskey Racing who are tied with 61 points. Complete standings and results can be found on the USF2000 website. There are still three more races to go, however, and starting on Wednesday, the USF2000 drivers will engage in battle on the challenging roller coaster of a course at Barber Motorsports Park.

(all times in Central Standard Time)

While we’re still not sure if live audio will be in the offering, live timing and scoring will be available at http://usf2000.com/results/live-timing.